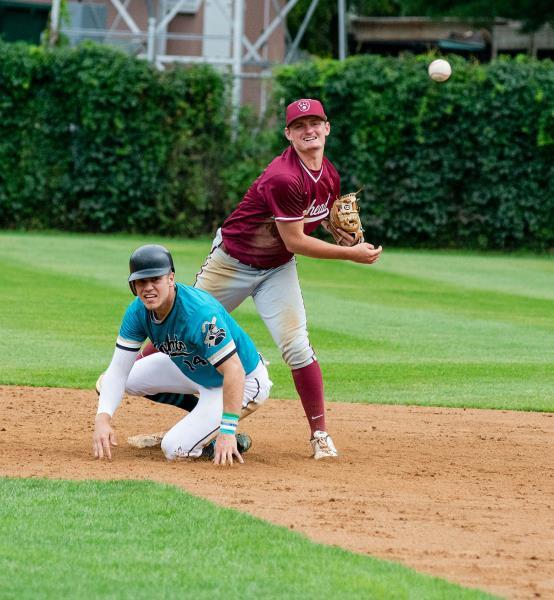 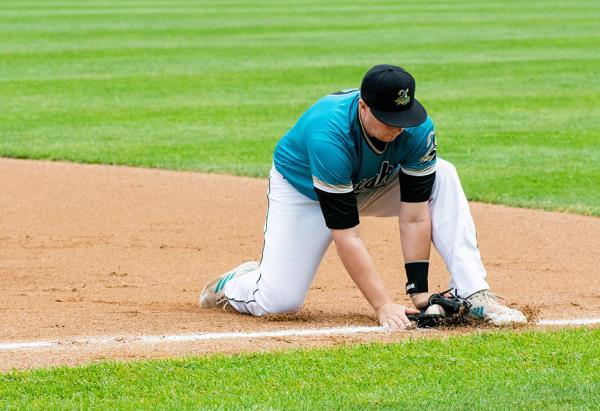 Class B Roundup at Delano: Moorhead shuts out Northfield to survive, Cubs put away Vics
Posted on Aug 26, 2019

The Cubs helped the Vics make it a little interesting in the ninth, but in the end, Chaska’s consistency at the plate turned out to be more than enough.

The Chaska Cubs won 11-5 over the Victoria Vics in a Class B State Tournament elimination game Sunday at Delano Municipal Baseball Park. The Cubs scored in six of eight innings they batted in, and committed three errors to help the Vics put together a three-run ninth.

Chaska scored in the first three innings of the game and held leads of 8-2 after three and 11-2 after eight.

Victoria began to rally in the ninth, down 11-2. With one out and one on, three straight Vics had balls misplayed by Chaska infielders for errors, two of the errors scoring runs to cut it to 11-4. Victoria then had the bases loaded with one out, getting a sacrifice fly from Jared Davidson for its fifth run. Trey Cavello reloaded the bases with a single before Hunter Ruhland struck out swinging to end the game.

The Cubs put the first two on to start a four-run first inning. Tyler Polster drove in Mike Edlefsen with a single, Chase Hentges plated two with a triple and J.T. Canakes hit a sacrifice fly. Justin Johnson scored Edlefsen in the second to make it 5-0.

Victoria struck back in the third, scoring its first run on an error and adding an RBi single from Mitchell Olson to get within 5-2. Chaska responded with three in the bottom of the frame, scoring on an error, a Dylan Peterson single and a wild pitch to push it to 8-2.

Chaska scored single runs in the sixth, seventh and eighth innings as well.

Noah Salonen pitched six innings for Victoria, allowing nine runs, eight earned, on eight hits and nine walks, with one strikeout. Mitchell Olson and Trey Cavello each were 3-for-5 at the plate for the Vics.

Chaska’s Hentges was 2-for-3 with a run, a walk, a triple and two RBI, while Canakes was 2-for-3 with two runs, a walk, two RBI and a double. Ryan Rodriguez started for the Cubs, allowing two earned runs on six hits and four walks with eight strikeouts.

Early offense was enough for the Moorhead Brewers in a 5-0 elimination game win over the Northfield Knights Sunday at Delano Municipal Baseball Park.

Northfield didn’t help its case with four fielding errors as it bowed out of the Class B State Tournament — two of those errors led directly to runs for Moorhead in the second inning.

The Brewers loaded the bases with two outs in the second and took advantage of some defensive miscues by the Knights. Mike Peschel hit a ground ball to short that was misplayed and plated a run, and Tanner Adam followed with a grounder to third that was mishandled for an error and scored another run. Joe Hallock followed with an RBI single up the middle that ricocheted off the second-base bag and scored two to make it 5-0 Moorhead.

Jayse McLean led off the game with a home run blasted over the fence in right-center to put Moorhead up 1-0.

Northfield only had one runner get as far as second base, and never had more than one man on base in an inning. Jason Beilke started the game and allowed just three hits with two strikeouts in three innings of work. Kyle Kingsley got tthe win with six innings of relief, where he allowed three hits and struck out two.

McLean was 2-for-4 with two runs and a home run, while Hallock drove in two and went 2-for-5 for Moorhead.