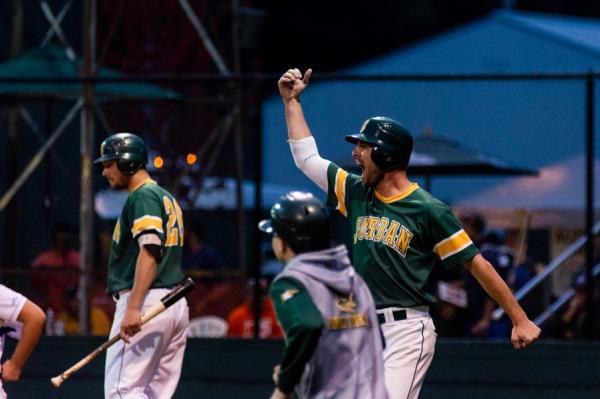 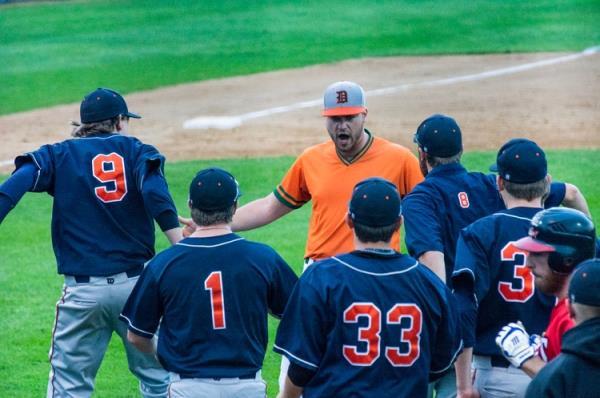 And then there were two.

Jordan outlasted Buckman in a 4-3 Class C state tournament semifinal win Sunday at Irish Stadium in Maple Lake. The Brewers earned a matchup with Hutchinson as they stymied the Billygoats in the penultimate game of the Class C tourney.

After a rough first inning, Upsala draftee Matt Swanson cruised on the mound until Jordan loaded the bases with one out in the top of the seventh. The Brewers got an RBI single from Steve Beckman and another run on a grounder bobbled for an error to go up 4-2.

Buckman threatened and got within one in the eighth thanks to three errors on Jordan shortstop Nate Beckman. The Billygoats put two on with fielding errors, and then a throwing error on a double-play chance allowed a run to score and make it 4-3.

Joe Lucas came on in relief for the final 5 ⅔ innings and finished the win with a 1-2-3 bottom of the ninth for Jordan.

Jordan starter Glenn Parker, a draftee from Henderson, ran into trouble in the fourth inning, with an error and two hit batters to load the bases. Lucas came in from center field to pitch, allowing a sacrifice fly to Travis Kahl that tied the game 2-2.

Scott Hollingsworth had a two-out RBI double, and a ground ball by Nate Beckman scored another as Jordan went up 2-0 in the top of the first inning.

Buckman responded with three straight singles, including an RBI from Lane Girtz that cut it to 2-1 after one inning.

Swanson only faced trouble in the two innings he allowed runs, and of the four, just two were earned. He gave up seven hits in his nine innings of work with two walks and four strikeouts.

The Billygoats had topped three region champions during their state tournament run, in New Ulm, Young America and Farming, but fell to the Region 6 winners in Jordan.

The Muskies hadn’t allowed a run in three state tournament games entering the Class C semifinals. Then they ran into the Huskies.

Hutchinson came back to topple New Market 7-5 at Irish Stadium Sunday in Maple Lake, a game where the pre-tournament favorite Muskies had plenty of chances, but couldn’t get enough big hits. Meanwhile, the Huskies got plenty, including three home runs combined from Marcus Hahn and Evan Kohli as they advanced to the Class C title game.

Hutchinson went ahead for the first time in the bottom of the seventh inning. Hahn hit a three-run homer with two outs after an intentional walk to Kohli to give the Huskies a 7-5 lead — his second home run of the game.

New Market put two on to start the ninth, but draftee Hunter Hart of Delano got a pop out, strikeout and fielder’s choice to close out the game and earn the win.

Hutchinson starter Kohli allowed a pair of singles to open the sixth and was pulled for Delano draftee Hunter Hart. Hart got a pair of outs, but one allowed the lead runner to advance to third. Hart was called for a balk while pitching to Nate Rost, and it pushed a run in to put New Market up 5-4. Hart got a strikeout of Rost to end the frame.

Kohli hit a two-run homer to tie the game in the bottom of the fifth. Jake Wendland had an RBI infield single to cut the deficit to 4-2 for Hutchinson, and Kohli followed with a towering shot to right field to make it 4-4.

The Muskies had a runner get to at least second in the first five innings and had at least two men reach in each of the first three. Still, Kohli stranded seven Muskies through the first five frames. New Market had 15 hits but left 12 on base.

A long at-bat by Kyle Bergstrom led to an RBI single to push the New Market lead to 4-1 in the fifth against Kohli.

New Market scored first, getting a two-out, two-run single from Rost in the top of the first for a 2-0 lead. Daniel Phyle added an RBI single in the second for a 3-0 Muskies lead.

Hahn hit a solo home run in the bottom of the second to cut the lead to 2-1. It was the first run New Market allowed in the state tournament — the Muskies won 1-0 over Luverne, 16-0 over New London-Spicer and 1-0 over Red Wing prior to playing Hutchinson.

Nate Rost pitched the first three innings for New Market, allowing one run on a solo home run, with four hits allowed total, and a walk. Matt Lane, a draftee from Faribault, entered in the fourth inning for New Market and gave up six runs, including a pair of home runs.

Hutchinson reaches the championship game for the first time since 1955, when it lost the Class A title to St. Peter 7-2.

The Jordan Brewers nipped away early and never trailed in a 4-2 Class C State Tournament quarterfinal win Sunday over the Bemidji Blue Ox at Irish Stadium in Maple Lake.

Jordan scored runs in the second and third inning before Bemidji tied the game with two in the top of the fourth. The Brewers responded with a run in the bottom of the inning to go up 3-1 and added an insurance run in the eighth.

Scott Hollingsworth started on the mound for Jordan and went seven innings, allowing two runs, one earned, on five hits and two walks with two strikeouts. Joe Lucas pitched two innings for the save, allowing just one hit and striking out four.

Hollingsworth went 2-for-4 with an RBI for Jordan at the plate, while Alex Buckman and Adam Kalal each added RBI.

Bemidji’s Cody Rutledge was 2-for-4 with a solo home run and Brazil Zuehlke had a pair of hits.

Jordan advanced to play Buckman in the semifinals at 7 p.m. in Maple Lake.

The Indians’ run ended without any more walk-off magic, as the Huskies’ Judson McKown ground through a complete-game shutout.

McKown allowed just three hits over nine innings, walking two and striking out three to send Hutchinson to the Class C semifinals in a 3-0 win over Waterville Sunday at Irish Stadium in Maple Lake.

Waterville got the tying run to the plate in the bottom of the ninth, but couldn’t get a clutch hit against McKown.

Hutchinson pushed across runs in the third and fourth innings for an early 2-0 lead and added another in the eighth. Evan Kohli and Marcus Hahn had two-hit games and each added a run driven in — Kohli’s on a solo home run.

Waterville finished 33-3 and had a 30-game win streak during the season. The Indians had two walk-off wins (both 3-2) and a 1-0 win during state before falling to Hutchinson.

Hutchinson advanced to the semifinals, after making it to the quarterfinals in 2018. The Huskies played New Market in the semis at Maple Lake.