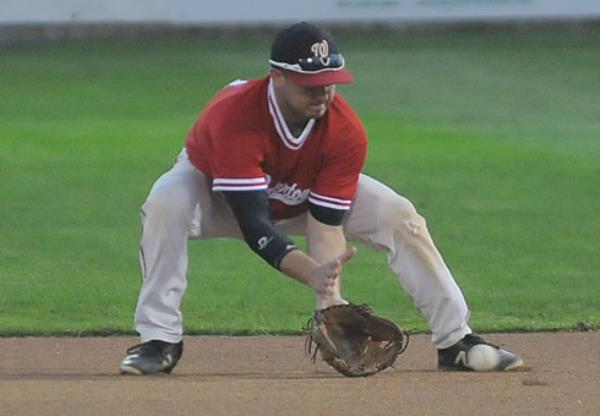 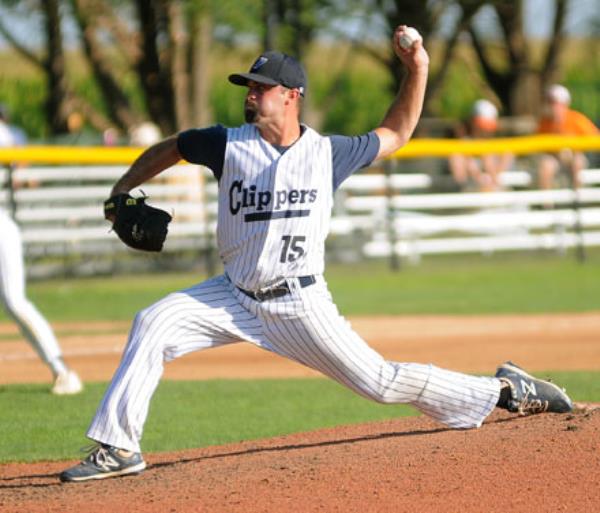 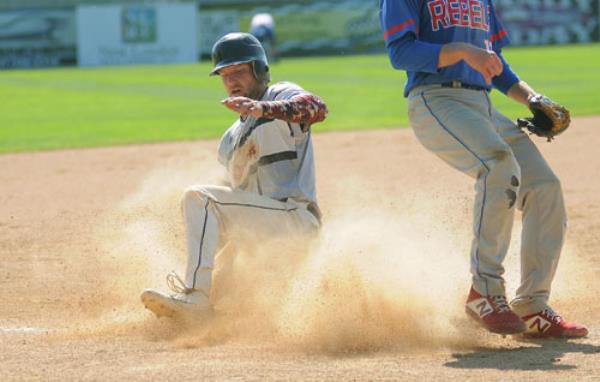 Watertown took advantage of early wildness from Red Wing to grab an early lead and held on for a 5-2 win Saturday at Milroy Yankees Field.

The Red Devils, making their first state tournament appearance in a decade, will get to stay around a little longer after Pat Tschida and company kept the Aces at bay.

Tschida scored the first run of the game in the first inning after singling, advancing on a passed ball and wild pitch before Ryan Hangartner’s infield single brought Tschida in.

Mitch Kelzer reached on an error in the second inning and later scored on Brenden Donohue’s single for a 2-0 lead.

Red Wing finally got something going in the top of the fifth inning when consecutive errors at shortstop allowed Grant Rolen to score to cut the lead to 2-1.

Watertown regained a two-run advantage in the bottom half of the inning with some two-out hitting. Hangartner reached with a lead-off walk and after a sacrifice bunt moved to second for Zach Iten to knock him in with a single.

Tschida pitched well in spite of the defense committing four errors. He gave up two runs on eight hits. He walked one and struck out three.

Aces starter Brady Schroeder labored through 5 innings. He gave up five hits and walked six while also hitting a batter. But he got out of jams for the most part, including leaving the bases loaded in the first and fifth innings. Watertown left 12 runners on for the game.

Red Wing made it interesting late in the eighth inning. Corey Tauer drew a one-out walk and came out for pinch runner Bear Blaney, who got picked off. Dixon Irwin, Brodie Smith and Schroeder all singled with two outs. Schroeder’s base hit scored Tate Shelstad, running for Irwin, to make it 3-2. A double steal put Smith and Schroeder at second and third after Ryan Grams, a draftee from Brownton, relieved Tschida. Grams got a swinging third strike to end the inning.

The Red Devils responded in the bottom half for a pair of runs after Jackson Meyer drew a lead-off walk. Tschida collected his third hit of the game and Donohuereached on a fielder’s choice to score Meyer and Hangartner’s double to the wall in center field pushed the lead to 5-2. Hangartner drove in two runs with a 2-for-4 performance and he scored a run.

Red Wing didn’t go quietly into the night in the top of the ninth and started a two-out rally when Adam Thygesen got his second hit of the game and Kyle Blahnik reached on an infield single but Grams got a strikeout to end the game.

Watertown faces Isanti next Saturday at 8 p.m. in Springfield.

Those fans got exactly that Saturday at Milroy Yankees Field as the two traded zeros for much of the game, but Geislinger and Watkins got the best of Dockendorf and Howard Lake in a 3-0 victory.

Watkins scratched across a run in the fifth inning when Carter Block hit a lead-off double. A sacrifice bunt moved him to third and Nolan Geislinger hit a fly to center field to score Block.

Dockendorf exited after seven innings after allowing one run on four hits. He walked none and struck out five in a hard-luck loss.

Jeremiah VanDeSteeg, a draftee from Hutchinson, relieved Dockendorf in the eighth and gave up two runs. Gavin Mathis drew the first walk of the game with one out while Kevin Kramer doubled to deep center field. That set the table for Lincoln Haugen, who singled up the middle with a drawn-in infield to make it a 3-0 game.

That’s all Geislinger needed. He didn’t put up the eye-popping strikeout numbers people have grown accustomed to seeing at the state tournament but he limited Howard Lake to just four hits. Only two of those hits got out of the infield. The first came in the eighth inning and the second in the ninth inning. Geislinger threw a complete game shutout with six strikeouts.

The Clippers move on to face Fergus Falls next Sunday at 11 a.m. in Milroy.

If you’ve got speed you can do a lot of things.

Buffalo, which made its first trip to state since 2017, showcased its speed Saturday at Milroy Yankees Field to pick up an 8-1 win over Fort Ripley. Whether it was stealing a base, swiping an extra base or bunting for a hit, the Bulldogs put enough pressure on the Rebels defense to score three unearned runs.

Ramon Vega Jr. walked and Jake Duske reached on an infield hit. As Duske stole second, Vega Jr. broke for home, a throw to third scooted away into the Rebels dugout and both runners scored for a 2-0 lead in the bottom of the first.

The Bulldogs added a run in the third inning when Noah Christenson walked, Colton Haight and Duske both reached on errors to allow Christenson to score for a 3-0 lead.

JD O’Donnell added a two-run single in the fifth inning to extend the lead to 5-0 and Ethan Hansen followed with a single to make it 6-0.

Fort Ripley had a chance to get back into the game in the top of the sixth inning when it loaded the bases with no outs but Buffalo reliever John Weber struck out two hitters on called third strikes and a relay from right field came in time to throw a runner out at the plate. The Rebels got one run on the play to make it 6-1.

Colton Haight went 2-for-5 with two runs and Duske went 3-for-5 with two runs. O’Donnell finished 2-for-4 with two RBI and Hansen went 2-for-2 with an RBI and a run. The Bulldogs had four infield base hits, including two from Duske. Kai Brisk had an RBI single in the eighth to push the lead to 8-1.

Buffalo will face Morris next Sunday at 5 p.m. in Springfield.

Union Hill’s Jacob Becker wears a pair gloves you’d find at the hardware store as batting gloves and he, along with the Bulldogs, were getting work done at the plate Saturday against Avon at Milroy in a 13-7 win.

Becker went 3-for-5 with four RBI and two runs while Union Hill finished with 18 hits as a team. Nate Berg connected for a three-run shot in the eighth that gave the Bulldogs a seven-run cushion at the time. Berg finished 3-for-5 with a home run and two doubles. Union Hill had six extra-base hits, including four doubles in the second inning to give the Bulldogs a 3-0 lead.

Adam Geisen went 3-for-4 with three runs and an RBI and Derek Masberg drove in a pair of runs.

The Lakers weren’t slouches at the plate either and finished with 15 hits for the game to bring the total between the teams to 33.

Becker drove in a pair of runs with a double in the second inning.

Avon answered back in the bottom half with four runs. Caleb Curry drove in two and Bjorn Hansen and another to take a 4-3 lead.

That lead didn’t last long when the Bulldogs scored twice in the top of the third to take a 5-4 lead. Becker collected his third RBI of the game with a single and passed ball allowed Jack Becker to score.

The Lakers manufactured a pair of runs in the bottom of the fourth to regain the lead 6-5. Avon loaded the bases when Matt Meyer singled and Hansen and Curry both drew walks. Riley Voit singled in a run and Cole Fuecker’s sacrifice fly to center field scored another.

Union Hill wasn’t done and came back in the fifth inning to retake the lead with two runs to lead 7-6. Adam Geisen hit a lead-off single, Jack Becker reached on an error and after a sacrifice bunt, Jacob Becker drove in his fourth RBI of the game. Derek Masberg followed with a single to score another run.

Union Hill finally got some breathing room in the top of the sixth to extend the lead to 9-6. Conrad Masberg singled with one out and Nate Lee singled. A walk to Adam Geisen loaded the bases and an error in right field allowed Masberg to score. Lee later scored when Zach Dubanoski got hit by a pitch with the bases loaded.

Adam Geisen, who had three hits and three runs drove in a run in the top of the seventh with a sacrifice fly to make it 10-6.

Avon kept coming and got a run back in the eighth inning when Cole Fuecker collected his second RBI with a single to score Riley Voit, who led off the inning with a double.

Matt Meyer went 4-for-5 with two runs for the Lakers while Curry went 2-for-4 with two RBI. Riley Voit finished 3-for-5 with an RBI and a run.

Conrad Masberg and Jack Kreutzian struggled on the mound for Union Hill until they gave way to Joe Becker. Becker threw the final 5 ⅔ and held the Lakers to one run. He struck out one and walked none. Masberg and Kreutzian walked six in 4 ⅓ innings.

The Bulldogs move on to face Lamberton Friday at 7:30 p.m. in Springfield