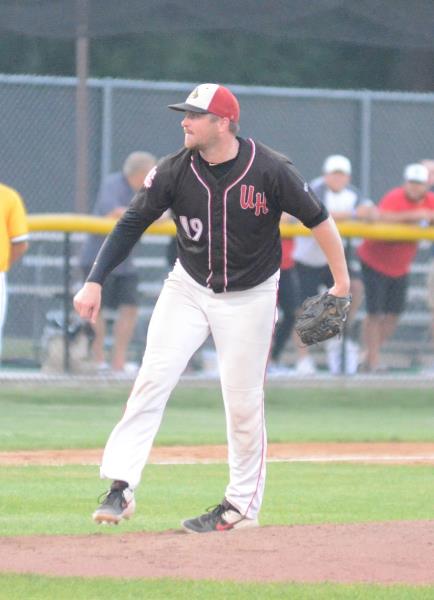 Union Hill didn’t get a hit until the sixth inning, but it finished with enough of them to win.

It was a pitcher’s duel at Riverside Park as the Union Hill Bulldogs escaped past the Lumberton Longsox, 2-1, in 10 innings.

Neither allowed a hit through the first three innings.

Lamberton’s Neil Eichten broke up Masberg’s no-hitter to lead off the bottom of the fourth. Masberg escaped a few jams with two runners on and finished with a line of seven innings, four hits, no runs, a walk and seven strikeouts.

The Bulldogs’ Nate Lee hit a sharp single to end Pistulka’s no-hit bid with two outs in the sixth. That proved to be a spark as Adam Giesen later singled him in for the game’s first run.

Union Hill held on to that 1-0 lead in the bottom of the eighth. Masberg walked the leadoff batter and was replaced by Nathan Berg.

A sacrifice bunt moved the runner up and a wild pitch pushed him to third. With two runners on, Berg got out.

After Union Hill went down quickly in the top of the ninth, Lamberton made the most of its last shot. Relief pitcher Nick Altermatt walked to help his cause, stole second and advanced to third on a fielder’s choice. Austin Irlbeck singled him in with one out.

The Longsox finally had momentum but couldn’t scratch the winning run across.

Lee and Giesen came up big again with singles to start the top of the 10th. Zach Dubanowski walked to load the bases with one out. An infield single by Jack Kreutzian on a tough play up the middle scored Lee for the ultimate game-winning run.

Altermatt pitched 3 1/3 innings of solid relief and escaped with one run allowed.

Another rally appeared in the cards for the Longsox when Eichten reached first on an error. He was gunned down stealing second base. Colby Pack walked to once again bring the winning run to the plate. Berg got a strikeout swinging to end the game.

Nathan Berg gets the strikeout to lock up the win.

Giesen finished with a game-high three hits as part of eight for Union Hill. Pack had two of Lamberton’s five hits.

Berg allowed one hit, one run (earned), walked three and struck out four.

Union Hill advances to the round of 16 6 p.m. Sept. 5 in Springfield to face the winner of Sunday’s 2 p.m. game in Springfield between the Luverne Redbirds and Young America Cardinals.