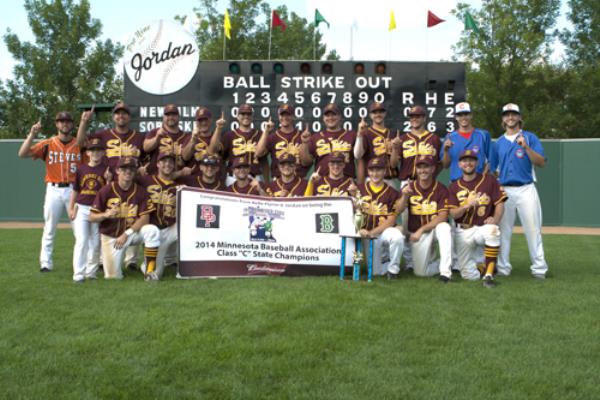 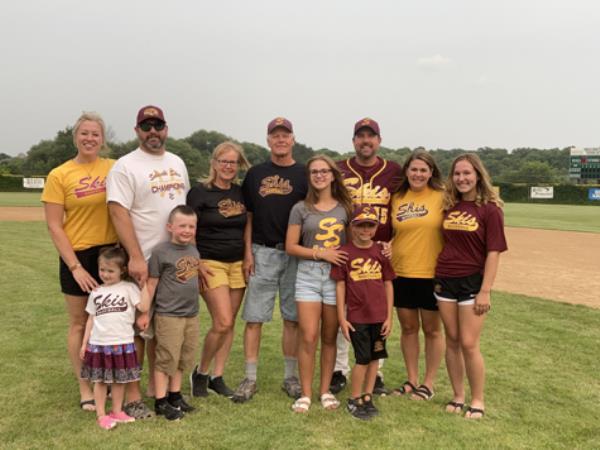 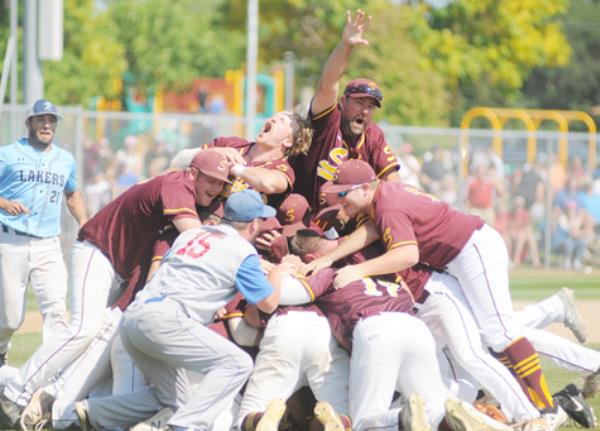 Putting on a Sobieski uniform has meant a little more for Brad Czech, and hanging it up was a little tougher.

“It’s a manager’s dream to put on the uniform with these guys,” Czech said. “They’re lifelong friends, tremendous competitors and they give of themselves to the team and the community in many ways. The players deserve every bit of the credit.”

No other team appeared in more state tournament title games than Sobieski from 2010-21 and only Plato can match the two titles in that span.

Czech helped establish a record of excellency through his lifelong association with the team. In the minds of some, he embodies the tenets of amateur baseball that make the game great.

“To me, it struck me the pride he took in respecting the game,” said longtime Victory League broadcaster Rick Grammond. “Respecting the Sobieski uniform and the players who went before them, the pride in putting on that uniform.”

Czech’s pride in putting on the Sobieski uniform started early. Czech grew up three minutes from the Sobieski ballpark and started playing baseball for the Sobieski Little League team in second grade. Sundays became a routine of attending church and going to the ballpark for the Czech family. It’s remained that way as another generation of Czechs have continued the routine.

Czech grew up watching the Skis play while he and his brother, Jon, shagged fly balls with other kids. Czech finally got the opportunity to put on a maroon and gold Sobieski uniform in his junior year of high school. When Czech, joined the team, the Skis had reached the state tournament seven times in the club’s history and it last reached the state tournament in 1991.

Czech, who played third base and pitched, helped lead Sobieski back to the state tournament in his fourth year with the club during the 1998 season. The Skis captured the Region 8 title and Czech earned region tournament MVP honors. Sobieski defeated Bird Island 6-5 but lost 8-3 to Richmond in the second round to end its tournament. Following his graduation from Little Falls High School in 1996, Czech departed for Bemidji State University to play football and baseball, continuing a stream of Little Falls area players attending BSU. Five others on last year’s roster for the Skis played at BSU.

Czech can look back now and relish the two state titles the Skis have won, but getting that first state title came with plenty of heartbreak in the state tournament. It took 15 state tournament trips before Sobieski won a state title in 2014. Along the way, the Skis lost one-run games in 2001, 2004, 2010 and 2013. Sobieski also lost to the eventual state champion in the 2001, 2006, 2012 and 2013 tournaments.

“When you put the gear away you have to think about that for the winter,” Czech said.

Bunting, which has become a calling card for the Skis, developed, in part, due to those losses, Czech said.

Case in point, in the 2021 state title game against Watertown in front of an announced crowd of 1,504, when in the top of the 11th inning, Sobieski had Riley Hirsch get hit by a pitch and Beau Hanowski draw a walk, most in attendance knew what to expect: a sacrifice bunt from No. 2 hitter Scott Litchy. Following Litchy's bunt, Collin Eckman singled through the right side of the infield to score Alex Gwost, who came on to run for Hirsch, and put the Skis up 1-0 after 10 innings of a 0-0 deadlock en route to a 3-0 victory.

“That’s the type of baseball we play and everyone believes in it,” Czech said.

Sobieski’s success coincided with the Minnesota Baseball Association’s decision to implement a new classification system for Class B and C teams. Following the 2018 state title game appearance, the Skis became the first Class C team to get moved into Class B. Sobieski had the option to cut players from the roster to remain in Class C, but chose to keep the roster intact and move up to Class B. After the 2021 state title, the Skis will again move up to Class B.

Czech, who also coaches the Little Falls junior varsity baseball team, takes pride in the fact that 19 of the 20 players on the roster either graduated or lived in Little Falls when they signed with the Skis.

“To me that speaks volumes about the type of ballplayers that we've grown in our community,” Czech said. “A ton of credit goes to the coaches who’ve raised these kids from our little league program all the way up to our varsity level and beyond. All of these coaches deserve a lot of appreciation for what they’ve been able to build. They've been able to develop quality ballplayers and even more importantly, quality people."

A title for all

Sobieski won its first state championship in the Skis’ 50th year of existence in 2014 and it came at the spot, Jordan, where the first Sobieski state tournament team appeared in 1973. It was that year that Sobieski officially adopted a team nickname. The MBA called Sobieski team members to ask for the team’s nickname to put into the state tournament program, Czech said. Sobieski is home to The Polish Palace, the tavern just down the road from the ballpark, and it didn’t take long for someone to suggest Skis as the team’s name. The name remains one of the more creative in the state.

Most will remember Tyler Jendro’s record-setting pitching performance in the 2014 state tournament where he won all six of Sobieski’s tournament games, a record that will likely remain unmatched. But for those in the Sobieski community, it stood as a championship for all of the players who took part in the 15 previous state tournament trips and the previous 50 years of the club.

The Skis won the close games in 2014, beating Hanska 2-0 in the first round and defeating Maple Lake 3-1 in the second round. Following a 4-0 win over New Market where Jendro threw a no-hitter, Sobieski beat Fergus Falls 4-1 in extra innings to reach the semifinals. The Skis defeated Faribault 2-1 to meet the New Ulm Brewers to decide the championship. Sobieski clinched its first state title with a 2-0 win.

“It’s a magical feeling when you’re able to accomplish that, especially when you’ve had so many tough losses,” Czech said. “It was truly special. I don’t think anyone will forget that year in Jordan in 2014. We were fortunate enough to win it.”

Sobieski’s park sits atop a hill and the field was built on top of an old gravel pit back in 1963. The team added a grandstand and concession stand in the early 1970s and the park remained largely the same, outside of field improvements, until 2018.

Fundraising for grandstand and concession stand renovations started three years earlier and in that time, Sobieski community drew $147,000 in donations for the project.

Sobieski Ballpark got a new covered grandstand, a new concession stand and new press box. The park also added mesh netting from dugout to dugout and a storage area under the grandstand.

Czech, his father, Harvey, and Jendro spent a lot of time traveling around to Stearns County League ballparks and others in the area to generate ideas for the Sobieski Ballpark redesign.

“I’m as proud of that renovation as anything we’ve accomplished,” Czech said. “It’s not a one-time thing, it will improve things for the next many decades into the future.”

Talk to Sobieski players and they’ll tell you that under Czech’s leadership, they only needed to worry about the game. Czech took care of all of the administrative tasks and many of the field maintenance duties.

“He did everything A to Z and it allowed us players not to worry about anything other than playing,” Jendro said. “He doesn’t take any credit for it, it’s just what a manager does.”

Czech’s humility and focus stand out and it’s rubbed off on the players. Czech has emphasized looking at the immediate and not thinking about things like looking at potential matchups in a state tournament.

One of Czech’s favorite phrases is, “stay humble in victory and keep pride and perspective in defeat.” That attitude has helped, especially in the moments of defeat, like the 2016 and 2018 state championships the Skis lost.

Sobieski lost 5-4 to Raymond in the 2016 championship after Jendro gave up a grand slam to Tyler Steen in the fifth inning and the Skis had 16 hits in the game. In 2018, Sobieski fell behind 8-0 to Plato after the first inning and started to climb out of the hole before rain delayed the game and dampened the Skis’ comeback effort, leading to a 9-5 loss.

Czech’s stepping down from managing in order to help manage his son, Brooks’ youth baseball teams. Czech imagines he’ll be at Sobieski Ballpark plenty, just not in the dugout with the Skis.

When Czech decided to announce his intentions in October, he called every player on the team to let them hear the news from him. Czech said he spent nine hours on the phone that day, reminiscing about past games and talking ball.

That kind of personal interaction speaks to Czech’s character. He’s the one who has the team sign and send thank you cards at the end of each season to all of the volunteers who help around the park each year.

“It’s always bigger than the team for him,” Beau Hanowski said.

Matt Baier is set to take over managing duties for Sobieski. Baier grew up in Springfield, another area with a rich baseball tradition, and managed the Bemidji Blue Ox for a handful of years. Baier helped lead the Blue Ox to a final four appearance at the 2017 state tournament and played with Hirsch at Bemidji State University.

“He’s got shoes that will never entirely be filled,” Baier said. “He’s got quite the tradition going. I feel blessed that I was looked to to take over.”

The wins and losses end up just being numbers at the end of the day. For Czech, baseball’s always about the relationships you build.

“It’s about the great people you meet along the journey that makes it special,” Czech said.