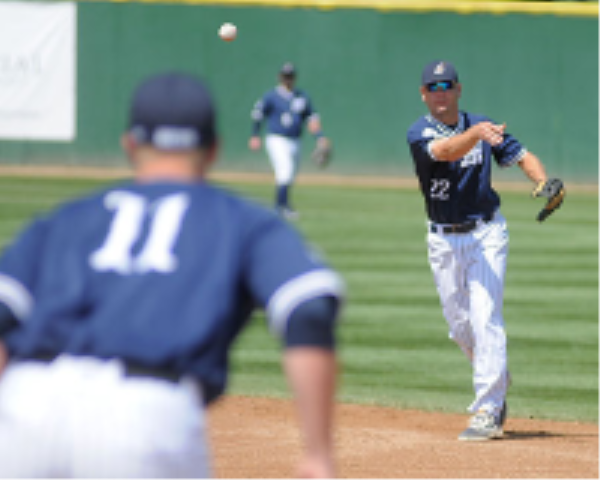 The late-season push begins to separate teams and we saw that unfold as Miesville climbed to the No. 1 spot after taking down previous No. 1 Rochester. It should make for an interesting state tournament with two heavies coming from Section. The Royals didn’t go far away, just down to No. 2 in this poll.

Blaine remained at No. 3 and will try to exorcize some postseason demons this year. Chanhassen, remember those guys, they got back into the top five at the No. 4 spot behind a winning streak. They share that spot with rival Chaska, which holds the No. 1 seed in the Section 3B tournament. The two teams will meet Sunday in the playoffs.

Cold Spring plummeted to No. 6 after an up-and-down showing against section rivals. Champlin Park remained at No. 7 and the Moorhead Brewers moved up to No. 8 from No. 10 in the last poll. Young America, which is battling for a spot in the state tournament, grabbed the No. 9 spot and Dundas rounded out the top 10 at No. 10.

1. Chaska Cubs — The Cubs earned the top seed in Section 3B and took down Prior Lake in the opening round and the Eagan Bandits at home on Tuesday. The Bandits and Cubs split during the regular season with each team winning at home.

2. Miesville Mudhens — Another 20-win season for the Mudhens, who garnered them the No. 1 seed in Section 1B. Up next for them is a series with the Hampton Cardinals beginning on Friday in Miesville.

3. Blaine Fusion — The Fusion were scorching hot in the month of July going a perfect 11-0 to take top honors in Section 4B. They will now face the Centennial Cougars in a best-of-three series with the winner moving on to state. The Fusion won both meetings earlier this season.

4. Rochester Royals — The Royals have put together a fine season with 24 wins and get the No. 2 seed in Section 1B. Big offensive numbers as of late and will see if they carry into the postseason against the Elko Express, a team they beat 10-0 a little over two weeks ago.

5. Chanhassen Red Birds — Many around the state went sour on the Red Birds after they were shut out twice at their invitational in mid-July, but that might have been the wake-up call to get them back on track. The four-time defending state champs have done just that, winning six straight and met the Burnsville Bobcats in the second round of the Section 3B playoffs.

6. Cold Spring Springers — The Springers won 20-plus games this season and secured the second seed in Section 2B. I'm quite certain they aren't lacking any motivation after last season and the road back begins on Friday as they host the Moorhead Mudcats in a best-of-three series.

7. Champlin Park LoGators — The LoGators racked up 26 in the win column this season and finished second in Section 4B, a couple of games behind Blaine. Standing in their way of a state tournament berth are the Saints of St. Michael, a team that has been tough to handle the last three years in the playoffs.

8. Moorhead Brewers — The Brewers are on a seven-game win streak to end the regular season and locked down the top spot in Section 2B.  They will host the Brainerd Bees this weekend in a best-of-three series with the winner moving on to state.

9. Dundas Dukes — The Dukes’ 13-game win streak came to an end last week and they will have to put that in the rearview mirror straight away as the New Market Muskies await them in a best-of-three series starting Friday.  Should be a good battle between these teams that split during the regular season.

10. New Market Muskies — The Muskies went 18-8 this season to follow up their fourth-place finish in the state tournament last year and their first stop on the road back to the tourney begins Friday against Dundas. See above.

1. Miesville Mudhens (21-8) — The Mudhens topped Rochester in a back-and-forth game and topped red-hot Dundas to take the No. 1 seed into the Section 1B tournament. Hens appear to be getting hot at the right time.

2. Rochester Royals (24-8) — Royals take down ranked Champlin on Tuesday, but can’t hold on against Miesville and drop the regular season finale to an always tough Tonka squad. They certainly hit the ball but do they have enough behind Matt Meyer on the bump to make a deep run?

3. Chanhassen Red Birds (22-8) — Chan cruises past Shakopee in 3B to extend the winning streak to seven. Not a team anybody wants to see come state tournament time.

5. Chaska Cubs (26-8) — Cubs cruise in the playoff opener over Prior Lake after securing the No. 1 spot in Section 3.

6. Cold Spring Springers (22-5) — Springers end the season with a dud against Moorhead, but an eight-game winning streak preceded it.

9. Dundas Dukes (23-11) — The Dukes finally cooled down a bit running into hot Tonka and Miesville clubs.

1. Blaine Fusion — Finished the regular season with the most wins (27) and highest winning percentage of any team in the state.

3. Cold Spring Springers — Ended the regular season with a record of 22-5, good enough to secure the No. 2 playoff seed in Section 2B.

4. Chaska Cubs — With an impressive record of 26-8, the Cubs enter the Section 3B tournament as the No. 1 seed.

5. Rochester Royals — The Royals are the No. 2 seed in Section 1B and look poised to make another state tournament appearance in 2022 with a record of 24-8.

6. Chanhassen Red Birds — In the midst of a six-game winning streak, the Red Birds are undoubtedly ready to defend their state title(s).

7. Champlin Park LoGators — The LoGators racked up 26 wins this season and sit as the No. 2 seed in Section 4B.

8. Moorhead Brewers — Moorhead has a strong record of 15-6 including a win over Section 2B contender, Sobieski, this past weekend.

9. Dundas Dukes — Ended the regular season with a record of 23-11 and will enter the Section 1B playoffs as the No. 4 seed.

10. New Market Muskies - An 18-8 record was good enough to give the Muskies the No. 3 seed in Section 1B playoffs. A matchup with Dundas should be fun to watch.