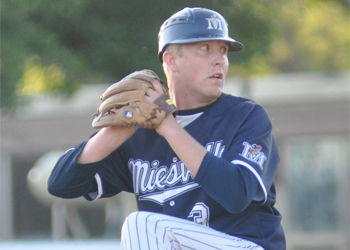 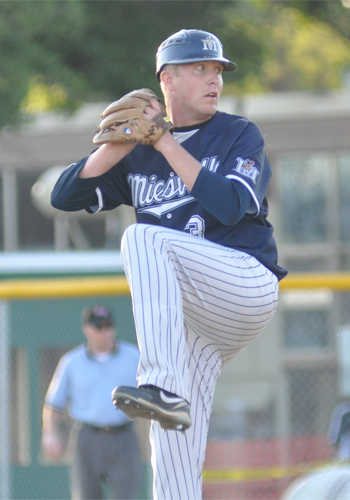 Baseball players wear helmets, but usually only when they are batting.

Besides catchers, there are only a few examples of players who wore helmets on the field - John Olerud is the one who usually comes to mind.

That's why it looked a little strange Sunday night in Brownton when Miesville sent out pitcher Erik Olson to throw the last two innings of the Mudhens' 5-4 come-back victory in an elimination game against Austin. Olson wears a helmet when he pitches to protect his brain from taking any life-threatening shots. It all started two years ago while he was playing baseball in his senior year at the University of St. Thomas.

He was 23 at the time, and this was the year St. Thomas won the National Championship. Things were going well for Olson until the weekend of the conference tournament.

"I lost the feeling in the tip of my throwing finger, which was the reason I went in to a doctor," he said. "I actually had a stroke. I went in for an angiogram and they found two blood clots in my finger. As I was coming out of sedation for it, my whole right side went numb. When I took a drink of water I could only taste it on the left side of my mouth."

"They rushed me in, did some tests, and the next day I found out I had two  blood clots in my brain," Olson added, "Since then I found out I have a blood condition and I'm on a blood thinner for the rest of my life."

The condition Olson has is known as Protein C deficiency, a rare genetic disease that is prevelant in only about .2 percent to .5 percent of the general population.

The news was devastating for Olson, who had to watch his team's National Championship run from the sidelines.

"I was forced to sit out. It broke my heart," he said.

Despite his bad break, Olson did not let it get him down and eventually made his way back on the field with the Mudhens. It took some convincing, but he  said he would not be denied the game of baseball.

"I love it way too much, I couldn't pass it up," Olson said. "I had to talk  the doctors into letting me play, but I was really determined to not let  this keep me from doing my favorite thing."

Doctors still do not want him to hit due to the unnecessary risk of being  beaned, so Olson's only job on the field is to pitch for the Mudhens. That doesn't bother him, though. He is just happy to be playing baseball and  continues to play hard despite the risks.

"It never really changed the way I play the game, because I always play it  hard and at a high level," he said. "But, it really taught me not to take anything for granted, because I almost had the game taken away from me."