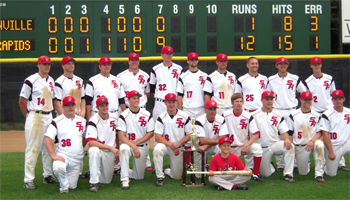 Box Score | Sauk Rapids State Tournament Statistics | Class B Bracket
GLENCOE, Minn. - The Sauk Rapids Cyclones were rated number one the whole second half of the 2011 season. They showed it was no fluke Sunday afternoon in Glencoe by defeating the Burnsville Bobcats 12-1 in a seven-inning, 10-run rule game.
The Cyclones drew first blood in the bottom of the third inning when Scott Geiger doubled in Paul Schlagen for the first run. Burnsville answered in the top of the next inning with their only run of the game. Roddy Hjort scored when a 3-6-3 double play ended with an errant throw from the Cyclones shortstop Jeremiah Piepkorn. That would be the only thing that Tournament MVP Piepkorn would do wrong all day.
Sauk Rapids scored a run in the fourth and fifth innings. Paul Schlangen singled in the second run and Piepkorn hit a solo home run to straight away centerfield to plate the third run.
In the sixth inning Sauk Rapids made a couple of sterling fielding plays to hold on to their 3-1 lead. After Chad Eul singled off the center field 375 sign, Charlie Dubanowski hit a shot to right center field that Nate Swan made a diving, circus catch on. Roddy Wiens hit a shot down the left field line that went all the way to the fence. Jason Hoppe hit Piepkorn on the relay and Piepkorn threw a bullet to catcher John Nemec to nail Eul at the plate for the third out.
That set the stage for the nine run seventh inning that would end the game and give Sauk Rapids its first Class B Championship. After Travis Cariveau started it off with a double, Scott Geiger singled to right field. Cariveau was dead meat at the plate as the throw from David Keeney easily beat him, however, Cariveau did an acrobatic slide making the
catcher miss him and he slapped his hand on the plate on the way by for a run. Then Tom Wippler, John Nemec, Jason Hoppe and Paul Schlangen all hit RBI singles. After Burnsville changed pitchers, Cariveau walked and Piepkorn stepped to the plate with the bases loaded. He made it easy for the MVP selection committee as he hit a shot over the left field fence for a grand slam home run ending the game.
Jeff Hille was the winning pitcher for Sauk Rapids throwing all seven innings. He gave up eight hits, one unearned run, walked one and struck out five. His dad, Scott, was the winning pitcher in the 1995 Class C championship game for Sauk Rapids. This might be the first time that a father and son have both been the winning pitcher in a State
Championship game.
“This was a great team effort. Everybody played well, everybody had their times and Pip was awesome,” said Scott Geiger who was 3-4 with two RBI. “I felt good…it worked out and Hille showed up and pitched really well today.”
Piepkorn thanked his teammates after he was awarded the Tournament MVP trophy. “Of all the years playing this was probably the best team that we’ve had…it was a blast,” said Piepkorn.
“How can we be rated number one and not picked to come out of our Section?” asked Jon Wippler. “One guy posted it on our message thing so everyone knew it. This is icing on the cake.” Sauk Rapids proved everything they needed to over the last two weekends.
They are 2011 Class B Champions.
Click here for Tom Elliot's story in the St. Cloud Times.  Here for another story on the Championship.
Click here for pictures of Class B Final Day