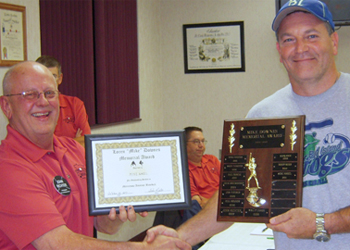 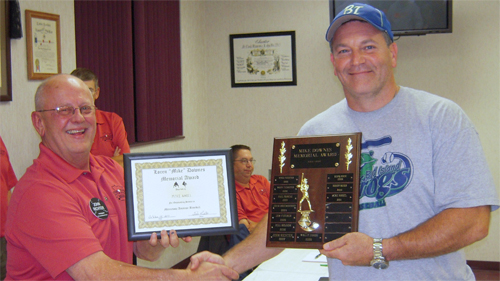 ST. CLOUD, Minn. - “I’m very humbled by this, I’m glad my family could be here,” is how Mike Nagel summed up receiving the Mike Downes Award Saturday night, October 15.

The award is for “Outstanding Service to Minnesota Amateur Baseball” and this was the 31st time it has been awarded since 1981.  It was presented at the conclusion of the Minnesota Baseball Association’s annual meeting.

As President John Richter read a lengthy list of Nagel’s accomplishments, people around the room were speculating on the recipient.  When it came to the total renovation of the Bird Island ballpark and acting as co-host of the 2010 State Tournament the identity became crystal clear.

“I had absolutely no idea--even when you said from Litchfield, because I was trying to think who else is from Litchfield around here because I sure as hell don’t deserve this award,” quipped Nagel.

Nagel has been involved in baseball for nearly 30 years as a player and manager.  He started as a player with the Litchfield Blues.  After he began working as an optometrist in Olivia, he was among a group that started the Bird Island amateur team in 1990.  He became the manager in 1995.  At that time they were playing in the Ara Wilson League.  In 2002 he was instrumental in forming the Cornbelt League and has been the president of that league since the inception.

At the conclusion of his acceptance remarks Nagel had this to say, “I will continue to do my best to represent baseball the way it should be, so thank you very much.”