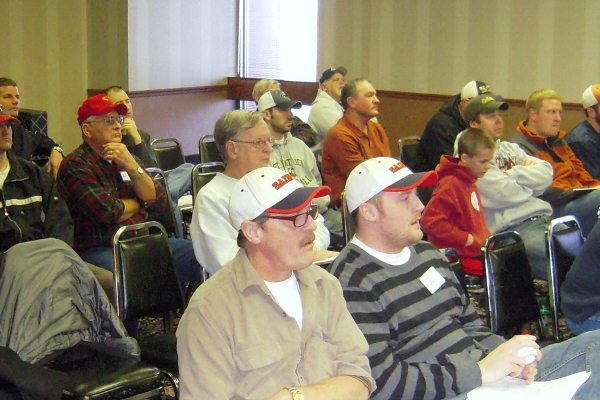 Board Sticks to Their Decisions
Posted on Jan 12, 2012

It was a new place (Bloomington) and a fresh atmosphere that the January, 2012 Board of Directors meeting took place, however, it opened with a familiar topic when five teams that had been reclassified from C to B in November asked to be moved back to C.

Albertville, Rogers, and Elk River joined together for one presentation that included a powerpoint presentation by Bill Porter, manager of Albertville.  He pointed out that the record for these three teams over the last five years was 61-174.  Isanti and St. Francis also presented their cases to remain in Class C.

After their presentations, Fred Roufs spoke for the board.  He said that the Board looked at four areas, high school enrollment, city population, success of the program, and how do you acquire players.  Primarily, he emphasized that it is how quickly a team could reload.

“We felt that we had to get more teams into B,” stated Roufs, “we took six from one league.  The communities were about the same size.  The communities were what we considered large…and by moving those six teams together you had a built-in league to play and you also had a section to move into.  It wouldn’t be disrupting for the scheduling.”

He went on to talk about Albertville, Rogers and Elk River joining St. Michael to make a good B league and section in their area.  Those three towns with their proximity to the metro area would soon be able to become competitive.

“Going forward we are going to continue to look and expand Class B over the next two to five years…we want to try to keep some of the leagues together…but it also looks at the geographic area that the teams have to draw their players from…our job as the Board here is to look out for the MBA whether it is Class A, B or C to make sure whatever we are doing isn’t adversely affecting one versus the other.  We are trying to be very objective and in some cases there is some subjectivity that goes into some of what we look at,” said Director Dave Hartmann.

With that the Board voted 9-0 to keep all teams as they were.

The Board felt that 67 responses from a class that has over 200 teams was not enough of a sample to really look at.  Director Hartmann commented that the Board wants teams to play in front of bigger crowds and that is why they are trying something different.  Some comments in the audience were that they didn’t know about moving teams from C to B and adding 16 teams to the C tournament.  The Board responded that if teams are interested in what is going on in the MBA, they should attend the annual meeting and start to get more involved.  Tom Heifert suggested that an agenda be put out before each meeting and the Board said that they would look into that.

The Board also addressed the B issues.  This year the Board will make all of the B decisions, including choosing the Super Section sites and doing the seeding for them.  They stated that they are open to advice from the B group (they met earlier in the day).  When asked about the site selection, the Board asked Jim Johnson of the B group to give them a list of possible sites and said that they would name the sites at the March meeting.

Steve Loos of DaVinci Software was also at the meeting site giving tutorials on the MBA website.  He reported that things went very well and he and his team of experts look forward to working with more and more teams and leagues as we prepare for the 2012 season.  Remember, each team and league is offered a free website.  All you have to do to get started is contact support@mnbaseball.org.