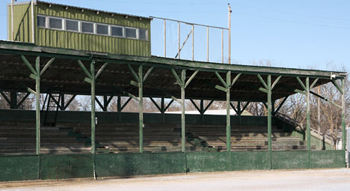 Perham Landmark to be Demolished
Posted on Jan 30, 2012

This article was written by John George with LakesAreaSports.com.

Mother Nature and Father Time have taken their toll on a Perham landmark.  The grandstand at Perham’s Al Krueger Field has been deemed unsafe, and plans are underway to demolish the structure.

Perham Activities Director Fred Sailer brought together a number of “baseball” people on Jan. 18 to begin discussion on how to handle the situation, and how to move forward.

The grandstand was built as a WPA project in the 1930’s.  Originally, only the center section was covered.  The rest of the grandstand was covered later on. At this time the poles that support the roof have rotted to the point that future repairs defy common sense.  Furthermore, areas of seating support are failing.

Complicating issues is that there really is no owner for the ballpark.

“In reality it is owned by the city of Perham and used by the high school, summer recreation, East Ottertail County fair, and numerous community events,” Sailer said in an e-mail to potential supporters.  “The city is not in a position to demolish and rebuild, nor is the fair board or school.”

That won’t be as easy as just knocking it down, as there are a lot of electrical concerns regarding the stadium lights to consider before clearing the site.

“It appears that the current wiring configuration is in violation of code and that specific transformers to each pole should be reduced to one transformer,” Sailer noted.  “Otter Tail Power may be able to assist use in advising the best means to resolve this issue.”

Discussion quickly turned to “replacing a landmark, with a landmark.”

With a lot of long-time area baseball guys in the room, it was obvious there was some sentiment to what Al Krueger Field represents to area ball players.

“It’s by far the best place to play in the area,” said Tony Stoll, a long time player and architect at BHH Partners.  Sailer mentioned how the East Grand Forks baseball team requested to play here when they had flood related field issues.

But, of course, nothing is free.  Although it was made clear that the field, and a grandstand that made the ballpark a Perham landmark, was important to the city, the school, and all those in attendance.

With issues of how things might get paid for set aside momentarily, discussion was held in regard to potential replacement facility.  There was general consensus that seating would be reduced from approximately 700 in the current structure, to 450, with 6-8 rows and the plywood façade replaced with brick.

“It would be our desire to replace a 75 year landmark with another landmark that will last 75 years,” Sailer said.

Three committees were formed from this initial meeting.  All committees will remain open to new members.

“We don’t know if this will take 5 months, or 5 years, but it’s something that needs to get done, one way or another,” Sailer said.

In the short-term, getting a new concrete slab as soon as the old grandstand is gone was discussed, and then bringing in temporary bleachers.  A new backstop will have to be among the 1st items on the new construction list.

Several fundraising ideas were discussed, but will be gone into with more detail once final cost estimates are completed.  Several grants will be considered, as well as fundraising drives with area businesses and ballplayers.

If you would like more information on the project, or to volunteer or contribute, please contact Fred Sailer at Perham High School, 346-1615, fsailer@perham.k12.mn.us;  or e-mail LakesAreaSports@arvig.net.