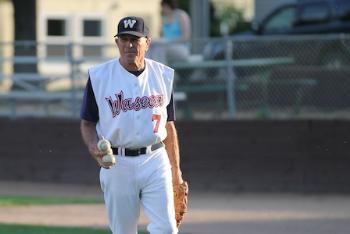 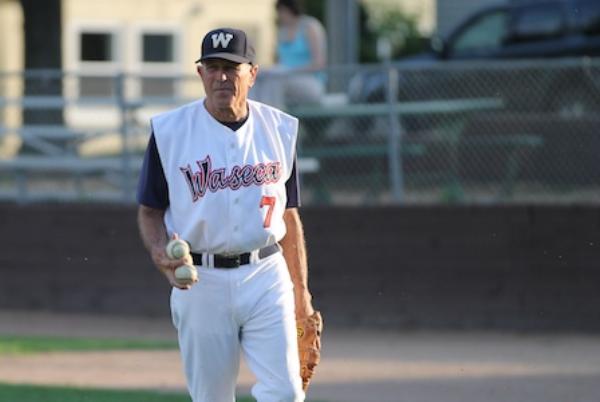 I’ll never forget the first time I introduced myself to Tink Larson, a long-time manager of virtually every baseball team in Waseca. It was actually a mass email sent out to all the coaches and managers of the MBA shortly after I was hired as the website coordinator. I simply requested rosters and schedules, and Tink was one of the first to respond. It was 1:00 a.m. on April 20, 2012 – 53 minutes after I sent out the email.

“Waseca’s schedule (is attached to the email). We don’t have a roster yet. We are losing some players. We need to find more. Thanks,” Larson replied.

It was clear to me at that point that Tink was a one-of-a-kind baseball guy. A 70-year-old man that responds to emails at 1:00 a.m. is a rarity in itself.

We chatted back and forth between then and our meeting between the Waseca Braves and St. Peter Saints – who I play for – on June 6. I had mentioned to Tink that I wanted to write a feature story on his baseball career and he was more than happy to talk and provide any information needed.

When June 6 rolled around and the Braves took their pregame infield-outfield routine, there was Tink taking grounders at first base. Between innings, he caught the pitcher as the catcher was putting on his gear. He had another player throw it back to the mound, though, since he had rotator cuff surgery in December. In the later innings, Larson coached first base and that’s exactly what he did – coached.

Larson’s dedication to the team and the game was clearly evident in the ways he remained active throughout the contest. Still an active player, he expects to get a few innings in this summer and then prepare for the over-50 Fall League.

“I go back to the doctor in two weeks to see how it is progressing,” Larson said. “I expect to be able to play in the over-50 Fall League come September 1. And then I go Arizona and Florida to play in October and November. I’ll play a few innings this summer for the Braves amateur team, but I won’t go in where I would have to try throwing someone out on a steal attempt. I’ll just lob it back to the pitcher.”

After the game between the Braves and Saints, I finally got the opportunity to talk with Tink face-to-face. He had a rake in hand with a bucket of dirt for the mound.

“Nobody else has dragged this mound in 45 years,” Larson explained.

The namesake of Tink Larson Field in Waseca, Tink has been the field’s caretaker for nearly half a century. He has a remote control for the sprinkler system, which he can control from his garage located across the street from the ballpark.

The field is sacred ground for the Larson family, not only because of its history with the family, but because a family member rests between home plate and the grandstand.

“We did bury our dog, named Harmon, behind home plate,” Larson acknowledged.  “Mike Max has had that on his shows a number of times so a lot of people ask me about it. Harmon Killebrew was one of my son’s, Paul, favorite player and it seemed like every time we went to a Twins game, Harmon would hit a homerun. When we got this dog, Paul named him Harmon. He went everywhere with Paul, including to the ballpark all the time. So, when he died we thought it would be only fitting that we buried him down there.”

Having the field named in his honor and being able to bury the family dog behind home plate was a long time coming, though, as Tink’s storied coaching career actually began in Kasson in 1962. At the young age of 19, Larson coached the amateur team, Legion team and Babe Ruth team at Kasson. And over 50 years later, Larson’s memory is as sharp as ever.

“I can remember just about every game I’ve played in,” Larson said. “The first year I coached went ok. It was kind of a big deal because you had to apply for the job, go before a board and they gave it to me when I was 19 over some veteran guys. We won the league and league playoffs that first year so things were going well.”

The game was different back when Larson started coaching, though. The Minnesota Twins relocated here from Washington D.C. in 1961 and before that, amateur baseball was the highest level played in the State with a huge following. Grandstands were packed for each game and heated rivalries were a dime-a-dozen.

“Back when I started, baseball was a bigger thing than what it is today,” Larson recalled. “There were a lot more teams playing and there was a lot more interest in the game. Crowds were large at the games and players got into a little bit more. There used to be heated rivalries back in those days. People used to get into skirmishes over it. Nowadays, everybody’s pretty friendly. You can talk to an opposing player before and after the game, pat him on the back, there are no big rivalries like there were back then.”

Larson’s coaching career in Kasson lasted six years until he made the move to Waseca in 1968. Over the next 44 years, including his six previous seasons with Kasson, Larson compiled an overall coaching record of 2572-1910 (.575) in 4482 games. He led the Waseca High School team to a 420-280 record and a 1990 State Class A Championship. With the town team, Larson directed the club to eight region titles and 13 State tournament appearances. Tink also won 21 playoff championships as the American Legion coach. He has coached 105 All-Conference players, 14 All-State and two All-Americans. Eight of his former players have gone on to become professionals.

After 50 seasons at the helm, Larson has finally taken on a new role as an assistant coach, but he remains just as active.

“I thought after 50 years it was a good time to step back and be an assistant coach and let some other guys take a hack at it,” Larson said. “I’m still going to help all the teams as an assistant and do all the work as far as scheduling, fundraising and everything that goes with it.”

Still an active player of 53 years, I have no doubt Tink will keep playing until the day he dies. And when that time comes, there won’t be a shortcoming of respect for what he has done for baseball in Waseca and the game as a whole.

“I probably won’t know what people will say about me when I’m no longer involved because I’ll have passed away by then,” Larson stated. “I would just hope that they say I did a good job, I cared about the game, I cared about the kids, the people playing and I provided a nice opportunity for kids to play the game.”

Whenever it is Waseca baseball no longer has the presence of Tink Larson, his legacy will live on. And he hopes to physically remain on the field alongside his dog, Harmon, behind home plate.

“I wish they could do that with me when I die, but I don’t believe the laws will allow that,” Larson said.

Well, Tink, I think they might just make an exception for a class act and one-of-a-kind baseball legend. Thanks for all that you do.