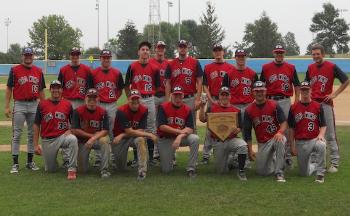 The Red Wing Aces claimed the title at the 2012 Jordan/Shakopee Coors Light Classic on Sunday in Shakopee, defeating the St. Michael Saints 9-2.

After a 1-0 lead through five innings, Red Wing tacked on four runs in the sixth and four in the seventh to put the game out of reach. The Saints could only answer with a run in both the sixth and seventh.

Jordan Warren picked up the win after five innings of work. He allowed one run on five hits without a strikeout or walk. Chris Guetzlaff (3-5, R, 2 RBI), Dave Jenson (3-4, 2 R) and Kyle Blahnik (3-4, 2 R, RBI) paced the Aces at the plate with three hits apiece.

Steve Boldt was named the tournament MVP after going 5-for-13 with four runs and six RBI in four games.