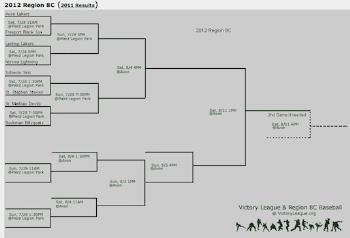 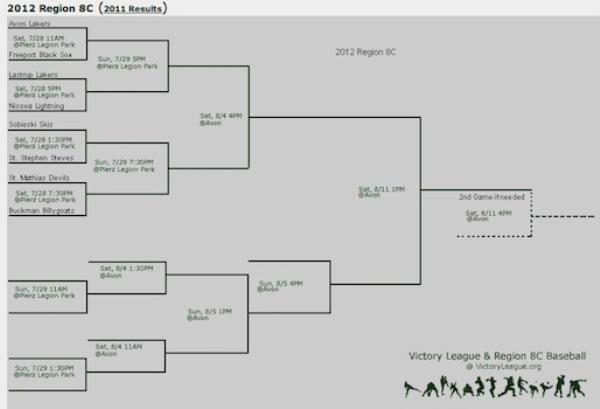 Over the next few days and leading into next week, we'll will be posting region/section previews for tournament play. We may not get a preview from every region and section, but all scores will be reported here on the MBA website. If you have any interest in writing a preview for a specific region or section, please contact me via email at csiewer3@gustavus.edu

Pierz Legion Park will host four games each day this Saturday (July 28) and Sunday (July 29) with the following two weekends being played in Avon.

Two teams will qualify for the State tournament on Sunday evening during the 5:00 and 7:30 p.m. games. The final two spots for State will be filled next Saturday in Avon.

State qualifiers will be able to draft two additional pitchers heading into the tournament.

The first round match-ups pit the West vs. the South and the East vs. the North.  The 11 a.m. game features South champion Avon and the second place team from the West, the Freeport Black Sox. The other half of that bracket includes East champion Lastrup and the East division runner-up Nisswa at 1:30p.m. Sobieski, the champs from the West, face second place St. Stephen from the South at 5 p.m. and the final match-up of the day features North champs St. Mathias and East runner-up Buckman at 7:30 p.m.

None of the teams in the first round match-ups faced each other during the Victory League regular season.

The Avon Lakers face first-year Victory League member Freeport in the first match-up of the day. Avon is expected to go with Kyle Collins on the mound and Freeport is likely to counter with Mike Frericks. Collins pitched a complete game in the South Division Championship against St. Stephen last week earning the win, while giving up three hits and striking out seven. Frericks put Freeport into the Region 8C tournament with a seven-inning outing and earning the win against Upsala.

Avon has been led offensively by veterans Matt Meyer, Jeff Swenson, Neil Manthe, and manager Dave Kahltoff. Young guys Taylor Holthaus and Reed Voit lead the team in runs batted in with 17 and 21.

Freeport has had a very balanced year offensively with its starting nine all hitting .280 or better.  Second basemen Jason Tschida has had a breakout year and is hitting .345 for the Sox.  Freeport ace pitcher Mike Frericks has also been a key hitter for the Black Sox, hitting .328 in the two-hole. The middle of the Black Sox order featuring Eric Eveslage, Chad Hess, Ryan Tschida, and Grant Hess all hit .300 or better.

One would not be surprised if it becomes a pitchers duel between the former minor leaguer Kyle Collins and current Wayne State Wildcat Mike Frericks.

A great match-up to start the night session at Pierz Legion Park features the undefeated and No. 1 ranked team in Class C in the MBA Poll, the Lastrup Lakers, squaring off with second-year Victory League member and a participant in last year’s final weekend of the Class C State Tournament, the Nisswa Lightning.

Lastrup has one of the league’s top pitchers in Chad Weiss who has been no stranger to region 8C or State tournament play, but it also has seen Scott Janson emerge as a top pitcher. Janson has a line of 8-0 with one save in 55 IP giving up 10 runs on 23 hits. It would be expected that Weiss and Janson will both get starts this weekend, the question remains in what order?

Nisswa’s top pitcher from last season Jason Roepke threw 5.2 innings on July 15 vs. St. Mathias and his previous outing before that was a month earlier vs. Freeport. Luke Schumer has done a very good job for the Lightning in Roepke’s absence logging the most innings on the team and posting a 2.20 ERA. Nisswa also picked up Bemidji State star and Fort Ripley Rebel Logal Kalis in the draft. Kalis is a hard throwing righty that could be a likely starter for the Lightning.

Nisswa has a very balanced and deep line-up. Jason Roepke provides power in the middle of the order along with offensive threats Aaron Jenkins, Drew Boland, Morgan Shepard, Luke Schumer, and Mark Germain.

This game could be the best opening round match-up of the day featuring a Weiss-Kalis match-up between two of the top pitchers in the Victory League.

The West division champion Sobieski Skis take on the Steves from St. Stephen in the second game of the day.

Sobieski has battled through numerous injuries this year to a very solid 15-2 record. Their only losses coming to division rivals Freeport and Upsala. The Skis just had Little Falls High School star Josh Wenzel return to action against Freeport in the division playoff championship where he scorched a big three-run double to cement the lead for the Skis. Wenzel missed the entire high school season with a leg injury. Joey Hanowski, another Little Falls High School star, should make his return from a hamstring injury this weekend. The Skis feature one more high school starter in shortstop Collin Eckman to go with a veteran crew led by two of the top hitters in the Victory League – Jon Czech and Isaac Smejia.

The Skis will likely start workhorse Tyler Jendro on the hill. Jendro has been dominant and dependant all year for the Skis while being their leadoff hitter. The Skis nice blend of young talent and State tournament-tested veterans make them one of the favorites in Region 8C.

St. Stephen comes battle-tested to regions after losing their first round divisional playoff game to Opole and forcing Avon to a second game in the South division championship. The Steves are likely to use lefty Nick Krippner on the mound. John Schumer has also provided quality starts and can be used out of the bullpen. The Steves also drafted St. Wendell Saint Brandon Hellman who had a very good season and could also be used in a starting or relief roll. Top hitters for the Steves include Travis and Trent Phelps along with Aaron and Adam Tschumperlin. Austin Guggenberger and Ben Omann are emerging as top young players for the Steves.

Sobieski is coming in as one of the favorites but face a dangerous St. Stephen team that has plenty of region 8C and State tournament experience in what should be another excellent first round match-up.

The last game of the day features the North playoff champion the St. Mathias Devils and the second place finisher out of the East, the Buckman Billygoats. St. Mathias finished third during the regular season but defeated Fort Ripley twice and Nisswa once on its way to the North playoff title.

Buckman enters the 8C tournament as the only team with a losing record. The Billygoats defeated the Pierz Bulldogs in a play-in game and eliminated the Pierz Brewers and Harding Dinosaurs on their way to clinching a region berth.

St. Mathias is led offensively by Zach Heidmann, Blake Thiesse, and Jake Francis. Those three along with Ryan Thiesse have combined for almost 70-percent of the Devils runs batted in. Josh Haberman has been a workhorse all year for the Devils. He has thrown 96.1 innings. With the season and a region 8C berth on the line, Haberman threw a complete game against Fort Ripley earning a 10-5 victory. The question for Devils manager Loren Thiesse is do you start the guy that put you into the region tournament or do you go with draftee Brett Kramer from the Fort Ripley Rebels? Kramer is widely considered one of the best pitchers in the league. He finished up a solid college career at St. John’s in the spring of 2011 and pitched very well for the Nisswa Lightning during their run to the final weekend of the state tournament last year.

Buckman will likely throw ace Jeremy Monson. Monson has been the Billygoats go-to-guy all year. Monson is also a threat offensively for the Billygoats along with veterans Joe, Mark, and Travis Kahl. Peter Suska is one the best young Billygoats.

All game summaries will be posted on www.victoryleague.org

Listen to the voice of the Victory Leauge Rick Grammond on KTFL AM960 or live streaming on www.fallsradio.com for all regions games.

KTLF AM960 is also available on the iPhone app TuneIn Radio.

Here are each team’s one draft pick heading into the region 8C tournament: