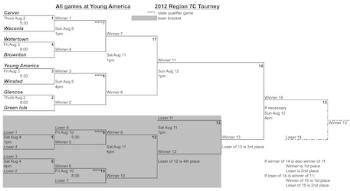 All Region 7C games will be played at Willkommen Park in Young America, weather permitting, beginning Thursday, August 2. The Young America baseball club is ready for a large crowd and has expanded its beverage and food menus. If you aren’t able to make it to the games, all of them will be broadcast locally on Glencoe’s KTWN 1310AM, with Jeremy Stender and Chris Dammann giving you the story of the game.

Here are the first round match-ups:

The Waconia Lakers are the first team in, qualifying with the best record in the Crow River Valley League North. With seven teams in the North, it was decided the team with the best regular season record advanced automatically. Last year, Waconia caught fire in the playoffs, and made a run to play in the State Championship game. It came up short to a tough Isanti team, still claiming second place in Class C. The Lakers are again led by Chris Bullis, who leads the league in ERA and is also hitting .423.

The Winsted Wildcats come in as the No. 2 seed from the North. Winsted recently played a couple years of Class B ball after making runs through the State tournament, taking fourth place in both 2007 and 2009. Tony Kley is its ace and the reigning CRVL Pitcher of the Year. This year, he has a 0.84 ERA and 93 strikeouts through 64 innings, including a no-hitter against Norwood. The Wildcats also have the CRVL MVP on their roster, shortstop and pitcher Josh Anthony.

The Watertown Red Devils come in as the third seed after sweeping St. Boni in their two-game playoff series. Watertown’s top pitcher is Justin Kohls and they are led offensively by Jared Duske and Pat Tschida, who owns a .411 batting average.

The Glencoe Brewers check in as the No. 4 seed in the North, after winning their three-game series against the New Germany Dutchmen. Glencoe has been both a frequent and dangerous visitor to the regions, but is coming this year with a far younger and less experienced team. Player/manager Scott Wawrzyniak is in his first year at the helm for the Brewers. They are paced on offense by Jamie Pauman and Josh Kraby. Stephen Wiblemo and John Thell are the top pitchers on the Glencoe staff, both having sub-3.00 ERAs.

In the South, Green Isle took the top seed. The Irish finished the regular season with a 17-4 record and swept Norwood by ten runs or more in both playoff games. Their strength is depth, both in the pitching rotation and in the lineup. They are a veteran and savvy group that have been here plenty of times before, and again have their sights set on State. Last year, they were surprised by the Plato Blue Jays in the second round of playoffs, missing out on the region tournament. Green Isle clashes with Glencoe on Thursday night at 8 p.m.

The Brownton Bruins earned the second seed in the South, only because they lost the last game of the season to Green Isle. They entered that game with equal records. Brownton entered the Crow in 2008 and has earned a trip to regions each year. However, they haven’t made it through to State in all those chances. They look to leave the past behind in 2012. They are led by starting pitcher Ryan Grams, who is in his first year with the Bruins after moving over from Glencoe. Their offense runs through Brad Daak. He is a multi-tool threat, able to hit for average and power, as well as one of the fastest runners in the league. Brownton plays Watertown on Friday night at 8 p.m. The Bruins beat Watertown in their only matchup this summer, 9-5 towards the end of June.

The hometown Young America Cardinals made it out of playoffs to regions on two tightly played wins against Hamburg. YA has made regions four of the past six seasons.  The Cardinals come into tournament play winning seven-straight games against some stiff competition. They are led on the mound by Aaron Cook, sporting a 4-2 record this season. Clint Aretz is the big stick on the team, coming out of playoffs with a .338 average. YA will lock up with Winsted on Friday evening at 5:30 p.m. Only two weeks ago, YA beat Winsted 6-2.

The Carver Black Sox round out the tournament field, as the No. 4 seed in the South. Carver is a very young group and most on the roster only has a year or two experience playing together. Their strength is the starting pitching and defense. Ace righty Lucas Sand and lefty Michael Patton both hold sub-2.00 ERAs entering region play, and both pitched shutout wins over a tough Plato team in round one of playoffs. Carver will play Waconia Thursday evening at 5:30 p.m. Waconia hasn’t seen Carver since the first game of the season, back in April, when the Lakers won 4-2.