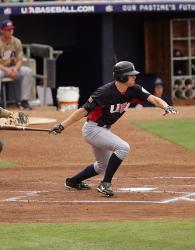 Ryan Boldt of the Red Wing Aces was named to the Team USA 18-and-under final roster Tuesday evening in Fulterton, Calif., while the Aces clinched a Class B State tourney berth with a 7-5 victory over Duluth on Saturday in the Red Wing Super Sectional.

Ryan Boldt watched and waited for most of Tuesday night, both during the baseball game and afterwards. That patience was finally rewarded in a big way.

The local standout was named to the 18-and-under Team USA baseball team late Tuesday night in California, becoming the first Minnesotan to make the squad since Twins star Joe Mauer in 2000. Boldt survived three cuts — 144 from around the country were invited to the initial camp held in North Carolina, including just two from Minnesota — made throughout the summer to make the final 20-man roster.

Another Minnesotan, Coon Rapids’ Logan Shore, did not make the final cut.

"It seemed like forever," Boldt said of Tuesday's wait. [continued...]

Read the full story on the Rochester Post-Bulletin website by clicking on the link above.

Red Wing's Ryan Boldt was named to the Team USA 18-and-under final team Tuesday evening in Fulterton, Calif., according to a source with USA Baseball.

Boldt secured a spot on the 20-man roster during the second phase of the 18U tryouts this week and is the first Minnesotan selected to the team since Joe Mauer in 200.

Boldt hit leadoff for three of the four games during the second phase of trials and though he tallied two hits in 13 at-bats, Boldt had a .353 on-base percentage and saw 4.5 pitches per plate appearance. He also led the team with four stolen bases and tied for the team lead with five runs scored.

Team USA narrowed the roster from 28 to 20 Tuesday night as it prepares for international competition.

The team will head to Taichung, Taiwan for games beginning Aug. 25 against Chinese Taipei before starting play in the International Baseball Federation Junior 18U World Championships in Seoul, South Korea.

Boldt, who was named the Perfect Game All-American Classic MVP after going 2-for-3 with a triple, hit .423 during the high school season as he helped lead the Wingers to their first state tournament appearance since 1977. Boldt had 28 RBI, five triples, three home runs, a .516 on-base percentage, and a .756 slugging percentage as a junior for Red Wing.

Logan Shore, of Coon Rapids, was not named to the final roster.

The 20-man USA Baseball 18U National Team roster is as follows: