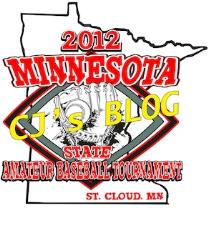 CJ’s Blog is back for the second weekend of the 2012 State Tournament at St. Cloud’s Dick Putz and Joe Faber Fields, as well as the Cold Spring Baseball Park.

My aim is to give you an inside look on all the "behind the scenes" action at State and my first-hand experiences.

I'll try to post a new entry a few times each day throughout the tourney, so check back often to see how it's going. I'll keep each entry in the same article, but will change the title with the most recent update's time [Updated 8/24: 2:52 p.m.] so that you'll know when a new entry has been posted. Also, I'll try to keep the MBA Facebook and Twitter pages fresh, so be sure to follow there as well.

Good luck to all the teams and we'll see you at the park!

2:52 p.m. – Made the trip up from St. Paul to St. Cloud this afternoon without any flat tires this time, so that’s a good start. Checked into the Holiday Inn and now just relaxing until I head to the park around 4:00 to get set up for the first Class B State match-up between the local Cold Spring Springers and Austin Greyhounds starting at 5:00 on Putz.

The remaining opening round Class B games are Victoria vs. Dundas at 5:30 (Faber), defending champ Sauk Rapids vs. Chaska at 7:30 (Putz) and the nightcap of Mankato vs. Red Wing at 8:00 (Faber). Any predictions? I really have no idea but just for fun I’ll take Cold Spring, Victoria, Chaska and Mankato.

11:44 p.m. – The first round of the Class B State tourney is over with three tightly contested games and one blowout. Not to brag, but I played the role of Miss Cleo and read the tarot cards right, correctly predicting all four winners – Cold Spring, Victoria, Chaska and Mankato (check the last post for proof).

In the first game of the day, Cold Spring ace Zach Femrite tossed a complete game shutout, while allowing only three hits in a 2-0 victory over the Austin Greyhounds. He struck out eight and walked three in 38 at-bats. Ben Griffin led the Springers at the plate with a 3-for-4 performance.

Over on Faber, Victoria made quick work of Dundas with a 13-2, seven-inning drubbing over the Dukes. The Vic’s absolutely crushed the ball all over the park with 16 hits, including three home runs, and six doubles. Matt Mann was the player of the day after going 3-for-5 with two homers, four RBI and three runs. The Victoria leadoff hitter started the scoring attack with a leadoff bomb in the first that cleared the 401-foot sign in left-center field and ended the game in the seventh with an anti-climactic walkoff bomb that went 50 feet over the left field fence.

Chris Volkmann added a mammoth shot of his own, sending the ball over the left field fence and back into the field after it plunked off the light pole. He went 2-for-4 with three RBI, two runs and a double. Each player in the Vic’s lineup but one had a hit, including six with a multi-hit night.

Back at Putz, the Chaska Cubs and defending champs Sauk Rapids Cyclones played out a pitchers’ duel between Pete Ohnsorg and Bryce Gapinski. The Cubs got to Gapinski early, though, with two runs in the first and that would be all they needed in the 2-1 win. Ohnsorg threw a complete game five-hitter with 12 strikeouts and no free passes for the win, while Gapinski also tossed a complete game – he gave up four hits with six strikeouts and one walk.

The nightcap between Mankato and Red Wing was also a tight match-up. The Twins struck early with two runs in the first and the Aces responded right away in the second with one. Red Wing then tied it at 2-2 in the fourth and the score would remain at two apiece until the bottom of the eighth. Mankato’s Tony Konicek singled and reached second on a sacrifice bunt. Steven Helget then hit a bloop single to put runners on the corners and Jeremy Sudbeck came through with the game-winning sacrifice fly for a 3-2 lead.

You know what, just WATCH THE VIDEO of Sudbeck’s game-winner by clicking THIS LINK.

Helget was perfect at the plate, going 4-for-4 with an RBI. Danny Miller picked up the win with a complete game on the hill. He gave up six hits and struck out 11. Red Wing’s Aaron Johnson also threw a complete game with eight hits, five Ks and two free passes.

The Class C tourney also kicks back up tomorrow. Jordan and Lastrup start the day off at 11am on Putz, while Morris and Waconia get going on Faber at 11:30am.

I think it’s finally time for a beer… and some pizza. Catch you at the park tomorrow.

11:05 p.m. – Back at the hotel after a 12-hour day at the park – still not finished, though, as we’re waiting for a final between Chaska and Mankato. Last I checked it was Chaska 6, Mankato 4 in the sixth.

In Class C, the Region champs finally got to play a real game after a two-week hiatus and five of the eight that played today lost. The three to move on were Fergus Falls, Milroy and Sobieski.

To start the day, Lastrup continued to prove its ranking after being touted as the No. 1 team in Class C throughout most the regular season. Once again, ace Chad Weiss tossed a complete game in a 5-1 win over Jordan. The shutout was broken up in the ninth, but not before Jordan manager Jason Chalupsky was tossed for arguing a questionable call at second base. I was taking pictures at the time and put together a frame-by-frame of the ejection, so check it out on our Facebook page if you haven’t already. Bonus points to Jason for the high bounce on his helmet spike.

Faber Field was converted into a football field to start the day as Waconia pummeled Morris 21-3. The Lakers tallied a pair of safeties in the third, fifth and seventh with a touchdown in the sixth.

Another interesting match-up was between Maple Lake and Stewartville-Racine. After SR put up a six-spot in the fifth, Maple Lake regained the lead in the seventh with one swing of the bat. Player/manager Chad Raiche blasted a grand slam to put the Lakers up 7-6. But the Sharks tied it back up in the eighth and the game was sent to extras. It didn’t take long, though, to decide a winner as the Lakers belted out seven runs for a 14-7 final.

Score just came in from Cold Spring: Chaska 6, Mankato 5. Ryan Seifert gets the win and Bob Wellman takes the loss.

Time to walk down the hallway to Legends – I think a few Board members owe me a drink. See you at the park again tomorrow for another full day of baseball.

4:52 p.m. – Well, last night was interesting. After finishing up my blog I went down to Legends to socialize with a few Board members and ran into Stewartville-Racine manager Andy Johnson. It was funny actually meeting him face-to-face for the first time after going back and forth with about 100 emails over the course of the summer. A lot of good “baseball talk” went on late Saturday night to say the least.

Oh, and if I didn’t mention it last night, congrats to Andy and the Sharks on a great season.

Today’s games are halfway through and the Class C Sweet-16 picture is getting clearer. Cannon Falls shut out Maple Plain 4-0, Avon convincingly defeated Lamberton 11-2, Bird Island hung on for a 6-4 win over St. Patrick and Fairmont blanked New Munich 6-0. Region champs are 2-2 so far today.

Green Isle and Nisswa are just about underway. I’ll spend most my time watching that game and taking pictures and then head over to Faber for New London-Spicer vs. Leavenworth. The nightcaps tonight are Sartell vs. Waterville and Howard Lake vs. Midway.

Check back later for recaps.

10:47 p.m. – I’m spent after covering 24 games over three days so here’s a short and sweet entry before I head back home to Minneapolis.

The final four games of the day went like this:

The Region champs went 8-8 over the weekend.

Here are next weekend’s Sweet-16 match-ups: