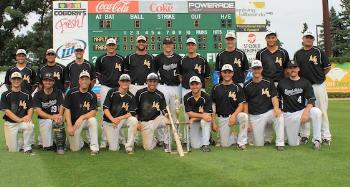 ST. CLOUD, Minn. - The Maple Lake Lakers claimed the 2012 MBA Class C State Tournament Championship with a 6-4 victory over the Fairmont Martins on Monday at Joe Faber Field. This is the third time Maple Lake has won a State title, but first since 1939.

“Unbelievable,” Maple Lake player/manager Chad Raiche answered when asked how it feels. “It’s an experience that you could never imagine.”

Raiche was an important piece to the championship puzzle as a team leader on the field and in the dugout. Raiche paced the Lakers at the plate, going 2-for-4 with a run, RBI and walk.

While waiting for his at-bat in the seventh inning, trailing 4-3, Raiche said his “heart can’t take this.” But he was able to settle the nerves by leading off the eighth with a bunt single, reached second on a sacrifice bunt by Bert Marsnik and scored the game-tying run on the play as the throw to first went all the way down the right field line.

Nate Johnson came to the plate later in the eighth with one out and a runner on second and came through with what proved to be the game-winning hit, scoring Marsnik.

What set the table for Johnson’s game-winning hit, though, was a stellar pitching performance from Jeremy Schmidt in relief. With one out and the bases loaded in the seventh, Schmidt was handed the ball and responded with a strikeout and groundout to end the Fairmont rally.

Schmidt gave up one hit and walked one in the eighth, but no runs came from it and in the ninth he closed the door with a K and two fly-outs to center, earning the win. For his outstanding display in the championship game and throughout the whole tournament, Schmidt was named the tournament’s MVP.

“Jeremy’s a horse,” Raiche said. “I don’t even know what to say about the kid. When I talked to him this morning there was no chance in the world he was throwing. I saw him start to get loose in the seventh and I knew he wanted it. I told him a month ago after we qualified for State, ‘go ahead and win yourself a State MVP,’ and here we are.”

The road to the championship wasn’t easy for the Lakers. Coming out of a tough Region 12, Maple Lake earned a State berth with wins over Cokato and Dassel-Cokato, but fell to Howard Lake and Maple Plaine in games that determined the Lakers’ No. 3 seed.

Maple Lake will enjoy this one for a while, but it is never too early to look at the future. And Raiche feels the future is bright for the Lakers.