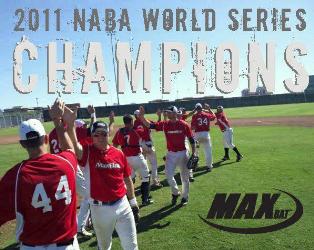 The amateur baseball season in Minnesota has been complete for over a month now, but a number of players from across the state are ready to continue competition this weekend in Arizona. Twenty-two members make up the team “Minnesota MaxBat” who will play at the National Adult Baseball Association (NABA) World Series that takes place in Phoenix on October 4-7. Last year’s Minnesota squad claimed the 18+ Majors Division Championship at the NABA World Series.

NABA is organized nationally by age groups. The largest division of play is the Open, or Majors, Division (18 & Over), where Minnesota MaxBat will compete. NABA also features 25 & Over, 35 & Over, 45 & Over and 55 & Over divisions.

The Majors Division has six teams this year and the top four will battle for the World Series ring. Keeping players fresh on the field will be key since NABA’s rules differ from the MBA. NABA allows defensive substitutions at any time without any monitoring. Teams can also hit as many players as they want on offense.

Aaron Olson of the Shakopee Indians, who has made the trip the past five years, feels the depth of this year’s team will be a major benefit.

“This year we have a big number going down with 22 guys,” Olson said. “The most we have had I think is 17, so we should have some good depth. With only seven possible games this year we should have plenty of pitching.”

Scott Hollingsworth of the Jordan Brewers shared Olson’s thoughts on the difference between this year’s club compared to previous years. “Well, depth in pitching and the addition of a few more sluggers,” Hollingsworth noted. “Experience is a huge thing also. With a title under our belt we know what to expect. I can say we are a team that comes together down there as if we played together all year long.”

Minnesota MaxBat opens play on Thursday against the San Diego Bones. “We don’t know too much about them, but San Diego always sends a solid team,” Olson acknowledged. “We are sending Jeremy “Clyde” Hinderks from Sacred Heart to start on the mound.”

Later on Thursday, MaxBat will take on the Casa Grande Cottonkings. “This team is tough, they are always in the Major division and make the playoffs,” Olson said. “This will be a tough game! They are from the Phoenix/Tucson area.  Jake Lund from Midway gets the nod on the bump for this one.”

On Friday, the club will play two more games. First, it will face Multiview from the Dallas, Texas area. “They won their league this year and have a bunch of Division I players mostly from the University of Texas, Longhorns,” Olson noted. “Pete Ohnsorg from Chaska is set to start pitching.”

The second game on Friday will be against the Kansas City Monarchs. “This team won the Minors division in 2010,” Olson mentioned. “Looks like a solid team. We’ve got Brook Lyter, our veteran lefty, positioned to start on the mound.”

On Saturday, Maxbat will have one more game in the morning before playoffs begin later in the day. Their opponent will be the SCSI Waves from Los Angeles. “They are the defending champs from last year,” Olson said. “This will be the toughest game most likely. Lee Hodges from Blue Earth is the tentative starter on the mound.”

The top four teams to come out of division play will start playoffs on Saturday afternoon. The No. 1 seed will face No. 4, while the two and three seeds will play each other. The championship game will be played on Sunday at Tempe Diablo Stadium beginning at 8:30 a.m.

Hollingsworth feels the level of competition will be high and they should have quality games throughout the tournament. “I will say some teams are equivalent to the level of the St. Paul Saints but there a couple teams that struggle. This year will be a challenge because all five teams we will play are going to be very good.”

MaxBat has compiled a team that includes some of the best players in the MBA, though. Here is this year’s roster:

The sponsor and namesake of the team, MaxBat, will provide the team with jerseys, bats and other accessories, but the players have to pay a $175 fee. They were able to get another sponsor, though, to help pay for the majority of the player’s fees. AJ Stoffels, who is on the team, owns Badgerland Exteriors out of Madison, Wis., made the contribution.

Both Olson and Hollingsworth, veteran members of the River Valley League, are excited to play on the same team as many of their MBA opponents during the summer.

“A lot of us have gone in the past and got to know each other so it is always fun playing those guys in the summer,” Olson said. “We were hoping for another team to be created this year and play in the other division, but it is tough with expenses and hard to get that many players able to go.”

“It is a great trip and very relaxing and fun with mixing a few baseball games in,” Hollingsworth added. “It is always nice to still play baseball in October.”