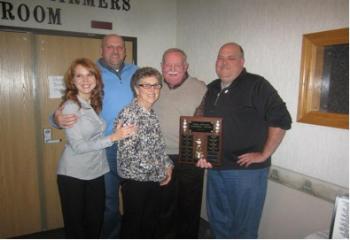 ST. CLOUD, Minn. - “Wow – what a humbling recognition for a man simply striving to support the common good of the grand old game across his hometown and Minnesota” is how Gerry “Mize” Meyer summed up receiving the Mike Downes Award. The award is for “outstanding service to Minnesota Amateur Baseball” and this was the 32nd time it has been awarded since 1981. Minnesota Baseball Association President John Richter presented it at the conclusion of the 2012 Minnesota Baseball Association Annual meeting held at the East Side VFW in St. Cloud on Saturday, October 20.

As President John Richter read a lengthy list of Meyer’s accomplishments, meeting attendees began speculating as to whom the 2012 recipient might be. Richter then referenced a number of Gerry’s accomplishments associated with Belle Plaine baseball and the 1991 grandstand and field renovation (re-positioning field, moving light towers, moving dugouts, etc.) at Tiger Park in Belle Plaine and the recipient of the 2012 award was evident to all in attendance as Meyer rose to a standing ovation to accept the award.

Meyer has been involved in amateur baseball for nearly 60 years as a player, manager, administrator and supporter. He played for and managed the Belle Plaine Tigers from the late 1950’s until 1970. He is currently the President of the Belle Plaine Baseball Association of which he has been a member for 27 years and President for the past 21 years. He served many years as the President of both the River Valley and Carver Central Leagues. Meyer had been involved in four State Amateur Baseball tournaments hosted by Belle Plaine – serving as Co-chairman of the tournaments in 1992 and 2004.

At the conclusion of his acceptance remarks Meyer had this to say, “As I approach 73 years of age, I realize that baseball has a lot in common with the game of life. Both require dedication, sacrifice, teamwork, enthusiasm, trust, respect, attitude, and faith to be successful. Job satisfaction is the goal, not just the score on the board.” Gerry’s son Brent summed up his father’s achievement by stating “nearly sixty years of involvement represents much more than Outstanding Service, it represents a love for the game of amateur baseball that few people have. My father, Gerry Meyer, or “Mr. Baseball” as we like to refer to him is one of those few or special Amateur Baseball people.”