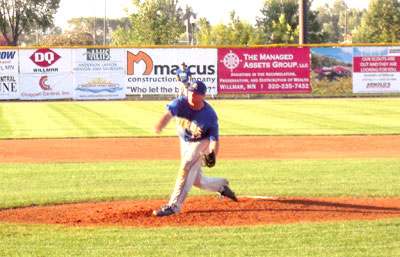 Talk to Jake Lund (pictured) for a while and you will understand that team and tradition is important.  We sat down after he had earned the complete game win in Midway's 3-0 second round triumph over St. Joseph.  I asked him how many tournaments he had been in and his answer was that Midway had been in the St. Martin, Lake Henry and Wahpeton, ND tournaments this summer.

Turns out that he has been in three State Tournaments in a row and this is the fourth one for him and his crew from Midway.  "This is the 16th State Tournament for Midway," said Lund "and we have had the same group of guys the last four.  Everyone from the team is from Menahga except Steve Wetterling from Willmar, and Tony Meech from Sebeka."

"A lot of players on the team's grandparents, my grandpa included, Edwin Lund, and Mike and Chris Baso's grandpa Eddie Baso started Miday in 1950.  They had been playing country baseball but they were never Midway until 1950.  My grandpa showed me a book this year of the first ever minutes of the first meeting of Midway baseball.  He'd never showed it to me and he just showed it to me this year a couple of weeks before the State Tournament," stated Lund.

He went on to tell about the experiences that have shaped many a town team over the years:  "The Midway tradition, as far as I know it in my life-our grandparents started it and then their kids-really their relatives-took over and a lot of their cousins-like  I'm related to the Basos and the Dormanens.  I'd say I'm related to probably six guys on the team."

"Our parents all played on the generation above us on the Midway team.  When the games would get over, as soon as they got off the field, we would all hustle out to the outfield and we would play until it got dark while they were consuming adult beverages.  We did that forever.  This has been the same group of guys since we were five years old playing together and it's really neat how it was our grandparents, then it was our parents and now it's us.  It's a tight knit group and a cool tradition," smiled Lund.

Lund, 29, lives in Menahga and works in Park Rapids.  Even with being an excellent pitcher, his tournament record was 0-3 before this year.  He lost his first three State Tournament games 2-1 (Milroy in extra innings, Cannon Falls with Keith Meyers and last year to the St. Cloud Snappers).  This year he is 2-0 with 15 innings pitched.  He has allowed only 11 hits, 3 runs, 2 earned runs and has 3 walks and 22 strike outs.  Opponents are hitting .200 against him.  As we were talking I commented that "now you've won two games"-"yep, nowwe've won two," he said

If you look at the old Midway pictures you will see a little Lund as batboy.  "We were batboys in those old State Tournament pictures.  That's what we used to just live for-coming down to the State Tournament, watching those guys, watching Randy (Burkman).  Randy was all of ours' idol.   The thing about that guy, we all look up to him and it sounds cliché but he really is a better guy than he is a pitcher and he was a great pitcher.  He would try to give me tips and I'd just say, 'Randy, you're a freak of nature, You can't tell me how to do what you did.' It was really cool having him as our host last year (at the State Tournament in Gaylord and Arlington)," continued Lund.

Lund started his college career at Waldorf Junior College in Iowa.  After two years he went to Austin Peay, a Division One school in Clarksville, Tennessee.   He came back to Waldorf for his senior year because Waldorf had gone to a four year school.   Brian Grunzke was the Waldorf coach.  "I absolutely loved him, but we didn't get along my freshman year at all.  The plan was to have everybody come back.  For one reason or another it didn't pan out and I ended up being the only senior and we had a horrible year.  But I wouldn't take it back because Grunzke has been the most inspirational person to me as far as baseball for sure and he taught me a lot about life too," said Lund.

When asked how long he intends to play Lund responded by saying, "I'm going to play until my body doesn't allow it. This is what I love, I'm going to do it forever."

Maybe if his body wears out there will be a relative to carry on the tradition.