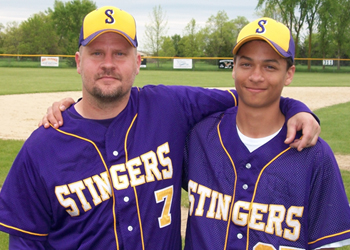 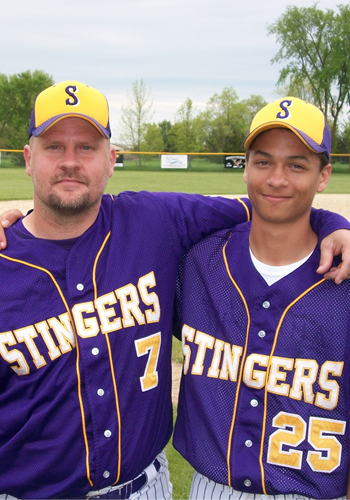 SEBEKA, Minn. - When Wadena didn't have a Legion baseball team to play with in 1989, Randy Nielsen joined the Sebeka Legion team.  The next year he played for the Sebeka Stingers amateur team.  1990 was the last year the Stingers played in the Minnesota Amateur Baseball State Tournament which was held in New Ulm and Sleepy Eye.

How did Sebeka get into the mix?  Randy's uncle was the Legion coach and his best friend and cousin Mike Heino (Coach's son) played outfield with Randy.  "My primary position on that Stingers team was as a pinch runner or to get playing experience when we were ahead by enough runs," said Nielsen.

Since then Nielsen has been busy.  Not playing baseball, but serving his country.  "When most people ask this question (armed forces history) they are asking if I served in Iraq and/or Afghanistan, stated Randy.  "I completed two combat tours in Iraq and one combat tour in Afghanistan."  He spent twenty years in the U. S. Marines moving all over the world. In addition to his Iraq and Afghanistan tours he has been in Misawa Air Base, Japan;  Quantico, Virginia; Key West, Florida; San Diego, California; and Camp Lejeune, North Carolina twice.  His speciality was as a "Special Intelligence Communicator" and he also served as a Drill Instructor, Martial Arts Instructor, and Martial Arts instructor Trainer.

Randy, 39, retired from the Marines in 2010 after 20 years and is currently attending Bemidji State University pursuing a degree in Biology.  Randy and his wife, LaShawnda, bought a house just north of Walker and live there with their two Children, Jared and his sister Randi.

Son Jared is 15 and just started playing baseball in Walker. He will play Legion baseball this summer with the Walker Legion.  When Randy's cousin and Stinger centerfielder Mike Heino called and suggested playing baseball again, Randy took him up on the opportunity and re-joined the Stingers.  Then he got the idea that it would be great to play with Jared.

They attended the May Board of Directors meeting and asked for permission for Jared to play on the Stingers also, even though Sebeka is approximately 50 miles away and not in the radius.  The Board voted 9-0 to allow Jared to play with Sebeka. "As Jared's father, I am truly thankful that the MBA approved our request to let Jared play on the same team as me," said Nielsen, "I have missed huge chunks of my family member's lives while I was deployed to Iraq and Afghanistan, but the weekend afternoons this summer will honestly help our family bond," he continued.

"Personally, I think it's great to have them on the team," said Heino, who is the longest tenured Stinger, having played 25 years with Sebeka. " Randy is all about perserverence and trying hard," he said. "It's been fun and good for the young guys.  Jared is more in the learning stages...he lives 50 miles away but they come for practice every Wednesday."

Jared says that he has been playing baseball since he was five years old.  He started in San Diego and then played little league and Babe Ruth baseball in Richlands, North Carolina.  "My team and I in Richlands loved the year that my dad was home to coach our team since he made it fun for the whole team," he said.  "I hope to gain experience that I wouldn't get in high school baseball.  There are players for the Stingers that have played college baseball and they can teach me alot about the game.  I also just love being around my relatives and playing the game."

So far the Stingers are 2-3 with two games scheduled this week.   The three of them played in the same outfield against the Midway Snurdbirds recently.  "Jared started in right, Mike Heino in Center and I ended up in left field," said Randy.  "So it went like this: LF (dad), CF (cousin/Jared's Godfather), and RF was Jared (son/Godson).  We are looking forward to many more oportunities to have some fun together."

"So far, Dad's batting average is higher than son's," said Randy.  "I'm a little embarrassed to give the exact averages but they both better get higher!"  No matter what, they are in it for the best of reasons--baseball and family.