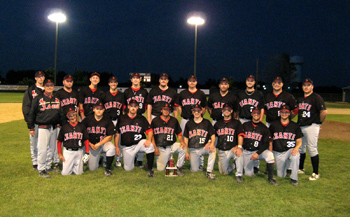 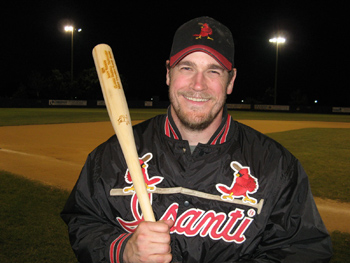 Rain interrupted the weekend tournaments, but it didn’t stop them from finishing up and naming Champions.  Here are the results from the weekend of June 16-19:

The Redbirds won their own tournament with great pitching and timely hitting.  They beat the St. Paul Mudhens 4-0, Anoka 8-3 and Blaine 4-0.  Bud Heifort was named the Tournament MVP.  Other scores from the tournament:

Cannon Falls went through the pool tournament undefeated.  They beat Hibbing 4-1, Bemidji 14-6, and in the Championship they downed Warroad 5-1.  Other scores:

The Red Wing Aces also won their own tournament this weekend.  They beat the Austin Greyhounds 5-4, New Richmond 13-2, and in the Championship it was Red Wing 5, Mankato 4.  Augie Lindmark was the winning pitcher for the Aces.  Other tournament scores:

Highway 55 Tournament in Kimball and Watkins

The Cold Spring Springers won four games in a row to win the tournament.  They beat Buffalo 10-2, Regal 10-3, Kimball 6-1 and took care of the Moorhead Brewers in the final 9-3.  Zach Femrite threw the final game getting the complete game win along with four strike outs.  Cold Spring got seven runs in the third inning of the final and cruised from there.

Mooehead made a good addition over the weekend adding Chris Coste to their roster.  Coste played four years with Philadelphia, including one World Series Championship, and one with Houston.  He attended Concordia College in Moorhead and is a Fargo, ND native.

This is what Mike Poppitz had to say about their tournament: We played our tourney this weekend and even with the rainy weather had some great games. Pitching was the name of the game this weekend with a lot of low scoring games, great defensive plays and very few home runs.  Shellenberger had a grand slam for Tonka in their win over Lyons' Pub on Saturday. Eric Winegarden for Victoria hit a 2 run rocket that traveled without a doubt 400 feet over the scoreboard and landed on the other side of County road 18.

We made a little money but, Great games, making friends and enjoying the game of baseball.  Thanks, Mike

It was a clean sweep for the Victory League in the Challenge.  Here are the scores:

Rick Grammond has a great write-up of all three games on the Sobieski Ski’s message board.

They couldn’t find a replacement for Fox Lake but still played the tournament.  Here are the scores:

The Sobieski Skis were scheduled to hold a tournament over the weekend, however, the league had so many make-up games to be played that they decided to forego the tournament and play regular season games.