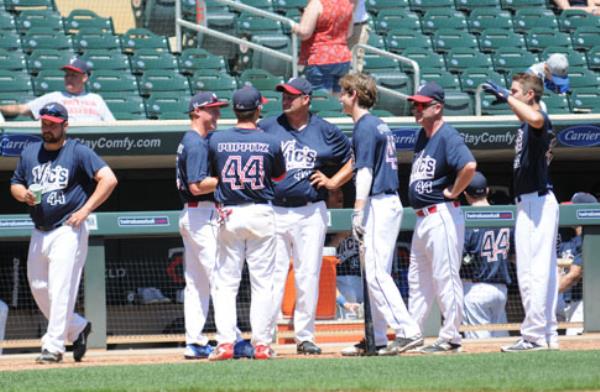 No suprise with who claimed the No. 1 spot in the latest edition of Class B rankings as our pollsters stayed firm in their belief that Chanhassen is the top team in Class B, even after a 5-0 loss to Victoria Tuesday. Our pollsters did take note of those Vics, as well as their neighbors, Chaska, and moved both teams up in the rankings.

Chaska and its retooled lineup ascended three spots to take the No. 3 ranking. Miesville, which lost 4-3 to Northifield last Sunday stayed put at No. 2.

Victoria garnered two votes in this poll to ease into the No. 10 spot.

The Knights, by virtue of their win over Miesville and other quality wins, remained at No. 4 while Moorhead slipped to No. 5.

Cold Spring also dropped a spot to No. 6 after finishing second at the Arlington/Gaylord High Life Invite to the Prior Lake Jays. Blaine moved into No. 7 after holding down the No. 9 ranking in the previous poll.

Dundas stayed at No. 8 but shares that spot with Elko, which moved up from No. 10 in the last poll.

1. Chanhassen: started the season 7-0, including 30 shutout innings into the week.

4. Chaska: 12 wins in a row, a championship title at Elko, the Cubs look to have a talented roster this season.

5. Victoria: It's been a few years since the Vics have been in the rankings, but they are 10-2 and knocked off No. 1 Chanhassen in a 5-0 shutout Tuesday.

1. Chanhassen - defending champs off to a 6-0 start to the season giving up very few runs to the opposition.  Wins in the last week over Beaudreau's, Prior Lake, and Young America.

2. Miesville -  Mudhens started the 2019 campaign 6-0 before losing to Class A power St. Louis Park. Wins over Hampton and rival Dundas has them at the top of Section 1B.

3. Chaska - Big jump this week for the Cubs as they fire out of the gates to start the season 12-0 taking down Elko and Eagan in the Fredrickson Classic in Elko.

4. Northfield - Knights have wins over many Class B teams including Blaine, Shakopee, Hampton, and Champlin. Just beat Miesville too.

5. Moorhead - Brewers split last weekend on the road at Cold Spring and will host other Section 2B teams Sauk Rapids, Beaudreau's, and Brainerd next weekend.

6. Cold Spring - Springers have won eight of 10 to begin the season with only setbacks to Minnetonka and Moorhead. They head to Arlington/Gaylord tournament this weekend and face Osceola to kick it off.

7. Dundas - Tight loss to Miesville last week 5-3.  Dukes have wins over Elko, Shakopee, and Rochester and will face Hampton this weekend.

8. Elko - Express sport a 12-2 record with close losses to Dundas and Chaska.

9. Blaine - half of their losses are to St. Anthony with the other two to Forest Lake and Northfield. The Fusion continue to play a top-level schedule year after year to have them ready for the postseason.

10. Beaudreau's Saints - Look for them to get back to the State tournament this year after last year's absence. Last Friday lost 3-2 on the road at Chanhassen.

1. Chanhassen — 7-0 and picked up some nice players