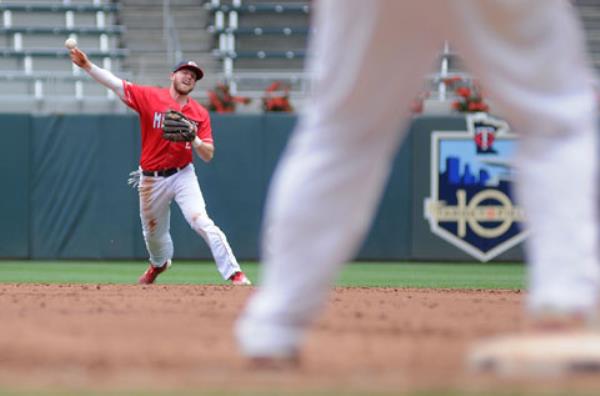 Jordan stayed put at the No. 3 spot but Delano rocketed into the top 10 at the No. 4 spot behind an 19-2 run and North Star League championship.

Buckman remained at No. 5 in this poll, though one pollster thinks the Billygoats should be higher. Young America dipped to No. 6 and New London-Spicer dropped to No. 7. Meanwhile Watkins moved down to No. 8 while Bird Island climbed into the top 10 at No. 9. Waterville, behind its 25-1 record, moved into the No. 10 spot. The Indians haven't lost since dropping their season-opening game to Class B Northfield.

1. Buckman Billygoats — The Goats have won 10 in a row, including a win against now Class B team, Sobieski

2. New Market Muskies — The Fish have lost a couple of 2-1 games since the last poll, But are still 19-2 in the DRS and have clinched the regular season title

3. Sartell Muskies — Looking at their Twitter feed all I see is “W’s” for the Northern Fish

4. Jordan Brewers — Couple losses in the last couple weeks both coming against Class B teams.  The Brewers have clinched the top spot out of the RVL for the Region 6C tournament

5. Young America Cardinals — Cards are 12-5 in the Crow tied with Carver for the best record in the league

6. Delano Athletics — I apologize for not having this team on my radar, they win the North Star League and are 19-2 overall

8. Carver Black Sox — The Black Sox sit at 12-4 in one of the best leagues in the state

9. Bird Island Bullfrogs — Top team in the Corn Belt league, at 11-1, and when you have a cool nickname like the Bullfrogs, you get in the top 10

10. New Prague Orioles — The Orioles started the season 3-8 in league play, but they are a different team now, winning nine straight in the DRS, including a win against New Market.

1. Sartell Muskies (24-1) — Sartell is the No. 1 seed in the West Division of the Sauk Valley  League playoffs and hasn’t lost since May 15. They were beaten by the Cold Spring Springers, 6-2. This is a team to watch the rest of the way.
2. Delano Athletics (19-2) — A 6-2 loss to the Shakopee Indians on July 9 ended a 15-game winning streak. The Athletics are 16-1 in the always competitive North Star League and will be a team to watch with the state tournament coming their way this season.
3. New Market Muskies (20-3) — The Muskies stumbled a bit with back-to-back losses to New Prague (2-1) and the Forest Lake Brewers (13-1), but are having another excellent season.
4. Buckman Billygoats (12-1) — Buckman entered the Victory League playoffs with a league-best 12-1 record and looks like one of the teams to beat in Region 8C.
5. Young America Cardinals (17-6) — Young America leads the Crow River South and has the top seed in Region 7C. Their losses lately have been to the Dilworth Raildogs and Waconia.
6. Jordan Brewers (22-5) — Jordan is clearly another team to watch as the playoffs commence.
7. New London-Spicer Twins (18-4) — Their two notably losses of late have been to the Starbuck Stars (8-4) and the Sartell Muskies (5-1). They lead the County Line League and will be a playoff force.
8. Watkins Clippers (11-1) — The Clippers suffered their first Central Valley League loss to Luxemburg (4-3). They’ve had the best season of all the teams in the CVL so far.
9. Fort Ripley Rebels (10-1) — The only other one-loss squad in the 19-team Victory League will be a top playoff team.
10. Richmond Royals (9-3) — The Stearns County League remains extremely balanced and right now, the Royals are playing as well as any in the 10-team league.
Chad Knutson — Heron Lake

6. Waterville Indians 25-1 only loss is to Class B Northfield

1. Sartell Muskies — 24-1, only loss is to the Cold Spring Spingers (B), looking to dominate their playoffs and regions
2. New Market Muskies — 20-3 Top dog in the DRS and the No. 1 seed going into the Region 3C tourney
3. Jordan Brewers — 22-5 on the season and wrapped up the No. 1 seed in the Region 6C tourney
4. Delano Athletics — 19-2 I made a mistake last poll by not including them, and all they have done is won games. They have claimed the No. 1 seed in Region 12C and ran away with the North Star League championship
5. Young America Cardinals — 17-6 on the season and they also lead the tough Region 7C seeding and nothing is set in that league for playoff seeding with four days left in the regular season.
6. Buckman Billygoats — 15-3 and one win away from a return visit to the Region 8C Tourney
7. Watkins Clippers — 11-1 and Geislinger has things going well for Watkins this season.
8. New London Spicer Twins — 18-4 on the season and looking tough going into the playoffs
9. Bird Island Bullfrogs — 16-1-2 also playing great with the addition of some new talent in their midst
10. St Patrick Irish — 15-3 in DRS play and looking to lock down the No. 2 seed in the Region 3C tourney
Honorable Mention: Fort Ripley Rebels and Carver Black Sox
Class C Rankings (As of July 17)
1. New Market Muskies (36)
1. Sartell Muskies (36)
3. Jordan Brewers (29)
4. Delano Athletics (27)
5. Buckman Billygoats (22)
6. Young America Cardinals (21)
7. New London-Spicer Twins (14)
8. Watkins Clippers (11)
9. Bird Island Bullfrogs (7)
10. Waterville Indians (5)
Others receiving votes: Carver Black Sox, New Prague Orioles, Fort Ripley Rebels, Richmond Royals, Luverne Redbirds, Stewartville-Racine Sharks, St. Patrick Irish, Plato Blue Jays, Windom Pirates, Brownton Bruins, Avon Lakers, New Ulm Brewers, Isanti Redbirds, Hutchinson Huskies, Wannamingo Jacks, Foley Lumberjacks, Meire Grove Grovers, Raymond Rockets, Fairmont Martins.