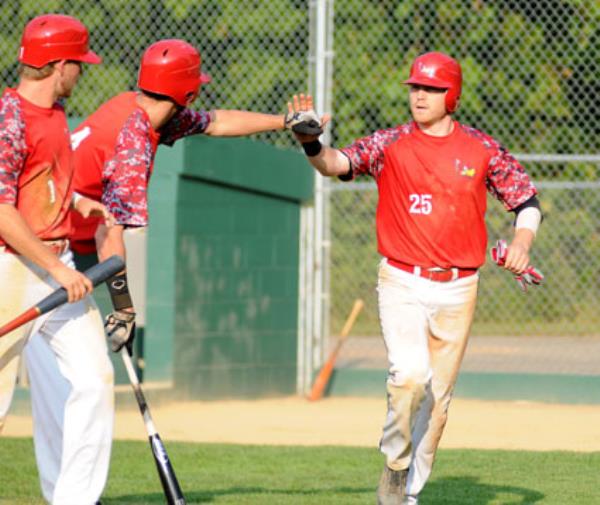 Class B rankings: Chanhassen gears up for a repeat run
Posted on Aug 14, 2019

Chanhassen left no doubt as to who the No. 1-ranked team in Class B this season with a wire-to-wire lead in the Class B poll this season. But can the Red Birds repeat as Class B champions? Our pollsters seem to think so in their latest voting.

But second-ranked Miesville knows something about back-to-back title and could stand in the way of Chanhassen. The Mudhens reclaimed the No. 2 ranking after Chaska edged them out for that slot in the previous poll.

Cold Spring climbed up from No. 5 to No. 3 in the final poll of the season while Blaine inched up to No. 4 from No. 5 in the last poll.

Speaking of Chaska, the Cubs dropped down to No. 6 with Moorhead after an up-and-down end to the regular season.

1. Chanhassen Red Birds — They've had the target on their backs all season, and they certainly will at the state tournament. With Straka, Spitzack and Reed along with relievers Nablo and Choles, the Red Birds have the deepest staff in the state.

2. Miesville Mudhens — Some times of up and down this summer, but certainly the Hens know how to turn it on in the playoffs. Do they have another run in them?

3. Cold Spring Springers — Year in and year out, look who remains near the top. The Springers won the Section 2 title and enter state with a 25-6 record.

4. Northfield Knights — The Knights have steadily gotten better each year and certainly could be playing on Labor Day this season.

5. Chaska Cubs — Cooled in July, but have two proven arms in Drake Kilber and Pete Ohnsorg to keep them going deep into August.

6. Blaine Fusion — Metro Minny and Section 4 champs. Is this the year the Fusion make some noise at state?

7. Moorhead Brewers — Like Cold Spring, August baseball is made for the Brewers. Count them in for Labor Day weekend.

8. Beaudreau's Saints — Tough three seed at state. The Saints are no easy out come the postseason.

9. Dundas Dukes — Playing Miesville, Northfield, Elko, Rochester and Hampton has prepared them well for what's ahead.

10. Eagan Bandits — When they have their starting nine, a very solid team with lots of arms.

1. Chanhassen Red Birds (25-5) — The Redbirds rolled through the RVL and Section 3, with three of their four losses coming to three Class A state tourney teams. Locked and loaded for another deep tourney run.

3. Cold Spring Springers (25-6) — The Springers survived a game one scare from Sobieski, plating three in the bottom of the ninth, then cruising in a series-clinching 12-4 victory. Femrite gives up eight earned in game one!

5. Blaine Fusion (32-7) — After losing three straight mid-June, the Fusion went on an 18-3 tear (one L was a forfeit) to finish the season and first round of section play. The most consistent team over that time, in my opinion.

6. Moorhead Brewers (20-6) — After getting pumped by Eagan, the Brewers also went on a tear, winning 12 straight before falling to Cold Spring in the section title game.

7. Chaska Cubs (23-8) — After shooting up the rankings, the Cubs stubbed their toes to end the season, losing four of five. They snuck by a plucky Burnsville club with two one-run wins to secure their spot at state.

8. Beaudreau’s Saints (15-6) — Beaudreau’s is a team that probably doesn’t get as much love as it deserves. A veteran team that has been together a long time is a recipe for success this time of year. They’ve won eight of 10.

9. Dundas Dukes (23-10) — Notched a nice win over Minnetonka to close out non-league play.

1. Chanhassen Red Birds — Only four losses on the season with three of them to Class A teams, so the rest of the field in Class B is going to have to bring their best to beat them.  The Red Birds lineup is loaded top to bottom and, oh yeah, they have some arms, too. The defending champs open with Champlin Park on Friday.

2. Miesville Mudhens — The Mudhens fly into the state tourney winning their last 14 ballgames after losing to Elko on July 2. They are looking to get back on top of the Class B after Chanhassen bumped them in last season's finale. First step for Miesville is a date with the Moorhead Mudcats on Saturday.

3. Cold Spring Springers — Winners of eight straight to end the regular season and section playoffs, the Springers claimed the top seed from Section 2B after sweeping Sobieski and beating the Brewers on Saturday. Their last defeat came at the hands of Chanhassen in mid-July. The Vics from Victoria will be their opponent in the round of 16 on Sunday.

4. Blaine Fusion — Fusion lost back-to-back games at the end of July to Champlin Park and Coon Rapids but were able to right the ship and dispose of Centennial and sweep Coon Rapids to nail down the top seed in Section 4B. This talented squad has what it takes to make a deep run in the tourney, but will need to get by a dangerous Rochester team on Saturday night.

5. Northfield Knights — Another team looking to take the big step this year after some good runs the last couple of years is the Knights of Northfield. The Beaudreau's Saints might have other ideas when they face off Saturday morning in what could be the most anticipated first-round pairing in the Class B tournament.

6. Chaska Cubs — Sweep of Burnsville in a couple tight ballgames allowed the Chaska to grab the No. 2 seed out of Section 3B. The Cubs get the Anoka Bucs to close out the weekend on Sunday afternoon.

7. Moorhead Brewers — A 13-game win streak snapped by Cold Spring on Saturday. Prior to the loss to the Springers, the last loss for the Brewers was an 11-1 thumping by the Eagan Bandits back in July at Chanhassen. Those two teams will meet again on Sunday with the season on the line.

8. Eagan Bandits — Bandits took the series with Victoria to punch their ticket from Section 3B. See above Sunday.

9. Coon Rapids Redbirds — These guys are no strangers to the state tournament. The Redbirds took down Andover in a series sweep but were then swept by Blaine for the top seed from Section 4B. They will face another perennial tournament team, the Dundas Dukes, on Saturday afternoon to see who moves on.

10. Beadreau's Saints — Swept Sauk Rapids in the opening round of Section 2B playoffs but were then defeated by the Moorhead Brewers and took the No. 3 seed. After a one year hiatus the Saints are back in the tournament and draw Northfield on Saturday morning. Should be a good one.