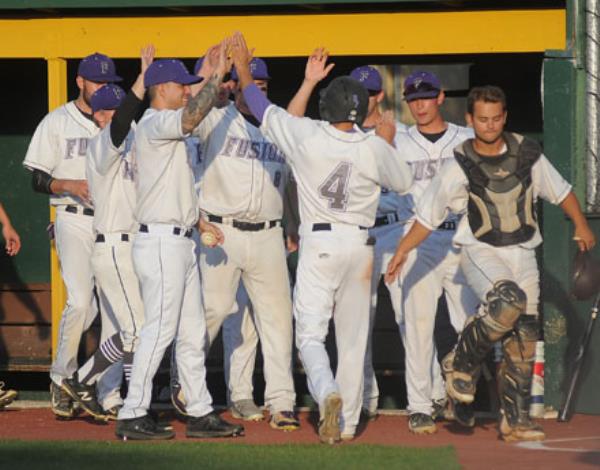 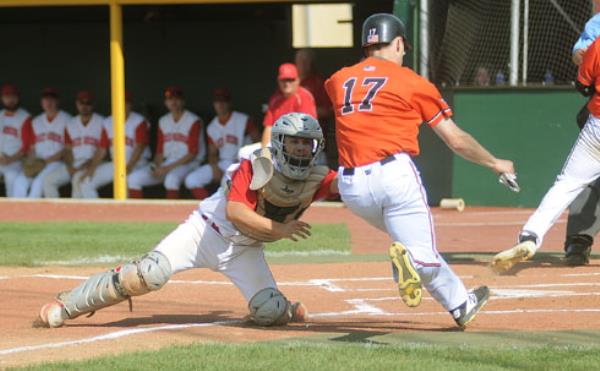 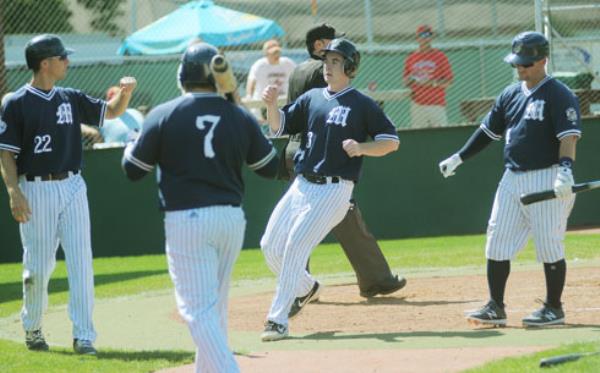 With the arms of former minor league pitchers Matt Meyer and Mitch Brown some expected the Rochester Royals a sneaky pick to make a run at the Class B state tournament but Blaine put those notions to bed in short order Saturday in Dassel in a 10-0 eight-inning win.

The Fusion, who have failed to advance out of the first round the past two years, jumped on Brown in the first three innings to jump out to a 6-0 lead they never relinquished.

Marcus Riewer knocked in three runs and finished 2-for-4 and Chris Olson drove in a pair of runs as Blaine took advantage of five walks as well as three wild pitches.

Brown got lifted after two-plus innings after allowing six runs on five hits.

Meyer came on for Brown and quieted the Fusion for a spell but Blaine added a run in the sixth when Olson singled to score Matt Mosey. Olson finished 2-for-3 with three RBI.

The Fusion added another run in the seventh when pinch hitter Buck Michaels singled, stole second, advanced to third on a Gottschalk single and stole home to go up 8-0.

Ryan Sutterer ended the game in the eighth inning when he connected for a two-run home run to left field.

The Fusion will get the winner of the Moorhead Brewers-Eagan matchup next Saturday at 11 a.m. in Dassel.

Dundas wasted little time in ensuring it will be around for another weekend of games as it pounced on Coon Rapids Saturday at Dassel in a 10-0 eight-inning win.

Red Birds starter Brandon Woznak lasted just 1 ⅓ innings before getting lifted for Steve Schroer, who didn’t fare much better. Dundas got to Schroer for a pair of runs in the fifth after Bishop singled and Tyler Jones got hit by a pitch. Mike Ludwig’s infield hit and an errant throw to third on the play allowed Bishop to score. Jones later scored on a single by Wilson Battle.

The Dukes added two runs in the top of the eighth after an error allowed the inning to continue. Drew Sathrum reached on an error and Lanoue singled. Carson Jones reached on a fielder’s choice and VanRoekel singled to score Sathrum. Jones later scored on an infield single from Tyler Jones, his second infield hit of the game.

Dukes starting pitcher Todd Mathison looked like the Mathison of old, limiting Coon Rapids to five hits through seven innings Mathison struck out eight hitters and walked none. The Red Birds did not have a base runner after the fifth inning.Alec Holcomb closed the game out with a scoreless eighth inning.

Dundas moves on to face the winner of Victoria-Cold Spring next Saturday at 4:30 p.m. in Dassel.

Moorhead made its first trip the state tournament Saturday in Dassel and for their first game they faced one of the most experienced teams in Class B in Miesville.

Experience won out as the Mudhens outlasted the Mudcats for a 6-2 win to advance to face the winner of Chaska-Anoka next Saturday at 1:30 p.m. in Dassel.

Upstart Moorhead struck first with a pair of runs in the fifth inning when Ben Swanson singled to score Reece Kramer and Mason Penske, both of whom singled with two outs. But that’s all the Mudcats got off Miesville Jacob Dickmeyer.

Dickmeyer went eight innings, gave up two runs on six hits, struck out eight, walked two and worked out of jams in the second and seventh innings. The Mudhens committed two errors in the seventh to put two runners on and finished with four errors in the game.

Second-ranked Miesville erased the two-run deficit in the next half inning when Brian Sprout and Dylan Blake singled to start the inning. After a sacrifice bunt, Tanner Vavra singled to score both runs and tie the game. Vavra finished 2-for-5 with two RBI and Sprout went 2-for-4 with a pair of RBI for the Mudhens.

Miesville kept going in the sixth when Nate Hammes reached on an error. Joey Werner and Sprout hit back-to-back doubles to extend the lead to 4-2.

Vavra led things off in the seventh inning with a double and scored on a double from Deryk Marks to build a 5-2 lead. Dylan Blake added a solo home run in the eighth to extend the lead to 6-2.

Ty Syverson went 6 ⅓ innings for the Mudcats and gave up five runs, four earned on 10 hits. He walked none and struck out one.

Sometimes you just have to be patient in baseball.

Ask the Northfield Knights who waited seven innings before their offense got going Saturday in a 5-2 victory over Beaudreau’s in Dassel.

Beaudreau’s starter Brindley Theisen held a potent Northfield lineup hitless through four innings until Knights third baseman Eric Pittman launched a rocket over the left field fence to cut the lead to 2-1. Northfield started a two-out rally and loaded the bases but Theisen got Knights No. 3-hitter Aldon Severson to ground out to shortstop to end the inning.

Theisen threw seven innings, allowed just the two hits, struck out seven and walked four but gave way to left-hander Nick Maiers in the eighth. That’s when Northfield got going.

The Knights’ eighth-inning rally started with a bunt single from leadoff hitter Tommy McDonald and starting pitcher Jake Mathison followed with a single that sent McDonald to third. Aldon Severson sent a ball into the gap in right center that fell after an error to allow McDonald and Mathison to score and give the Knights a 3-2 lead. Nick Bornhauser followed with a two-run shot to right field to solidify the lead.

For the first seven innings the Saints controlled the game.

The Saints took advantage of a wild start from Northfield starter Jake Mathison and grabbed a 1-0 lead when Mathison hit Maiers with the bases loaded. The Knights later got out of the inning with a double play.

Early on double plays bailed out both teams, each team ended the first two innings with double plays.

Beaudreau’s extended the lead in the second inning when Tom Imholte singled to score Jason Kotschevar after Kotschevar reached on a one-out single and Theisen followed with a double.

Mathison settled in after the first two innings to deliver nine innings, allowing six hits, striking out three and walking one as he waited for the offense to ignite.

Northfield, which has finished fourth the past two years, moves on to face Chanhassen next Friday at 7:30 p.m. in Dassel.