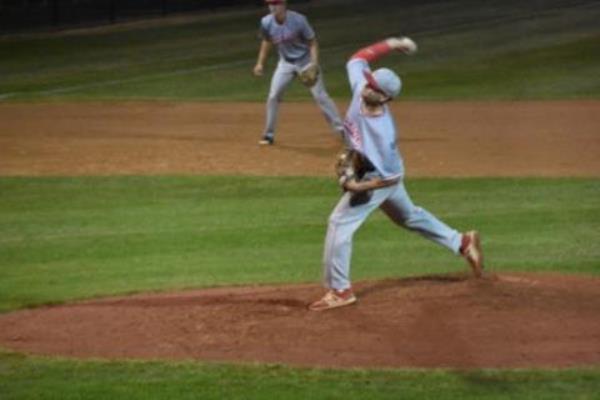 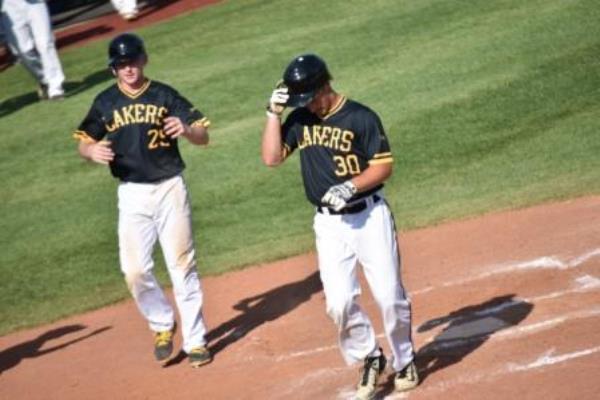 Luverne pitcher Tyler Reisdorfer said he didn’t expect to throw a no-hitter and see his Carver counterpart, Andrew Weber, do it in the same game, too.

For four-and-a-half innings, it looked that way as Luverne and Carver pitched to scoreless and hitless tie to start the game. It all changed when Carver broke the ice first in the bottom of the sixth inning followed by a Luverne rally in the top of the seventh en route to a 4-3 victory.

Weber shined for most of his 6 2/3 innings for the Black Sox. He fired six strikeouts but walked four batters and allowed three earned runs. Ryan Grams and Jacob Booden pitched in relief of Weber.

Carver drew the first hit of the game in the bottom of the fifth inning when third baseman Bryce Tuma. He made it to third off a sacrifice bunt and stolen base, but the Redbirds escaped before he could score due to a pop fly.

Tuma struck again in the bottom of the sixth inning with a two-run single, which sparked his team in a four-run inning.  He finished with 2-3 hitting and the two RBI.

Luverne reclaimed the lead in the top of the seventh and held on from there. The Redbirds defense stepped up, and Morris threw four strikeouts down the stretch.

Cloud nine came on time for Perham against Maple Lake.

Ryan Schmitz hit a walk-off solo home run to end a 12-inning marathon as Perham beat host Maple Lake 6-5. The Perham third baseman struck out five times and grounded out once before hitting his ninth home run of the season.

It broke a 5-5 tie that lasted four innings in an offense-filled game that saw five lead changes. Neither team led by more than two runs at any given time.

Lakers pitcher Mitch Wurm tied the game up on a double in the top of the fourth inning, scoring Hunter Malachek and Ben Goelz. Wurm went six innings on the mound and threw 10 strikeouts but allowed five earned runs on eight hits.

The Lakers went ahead 4-3 in the fourth after Wurm’s RBIs when first baseman Riley Decker hit an RBI. Perham tied it up 4-4 in the bottom of the sixth inning when first baseman Dawson Stevens hit a sacrifice fly to deep center field.

Pirates shortstop Maddux Kovash put his team ahead in the bottom of the seventh 5-4 when he took advantage of a wild pitch and moved around the bases. The Lakers didn’t let it last long as pinch hitter Brian Redemske scrapped for a tying run on a fielder’s choice in the top of the eighth inning.

Perham and Maple Lake both had runners on in extra innings but neither could get anyone across home place until Schmitz’s game-winner. Pirates pitcher Scott Schroeder, a draftee from Wadena-Deer Creek, earned the win.

The Pirates will face Raymond 7 p.m. Aug. 25 at Maple Lake in the next round.

Prior Lake garnered runs or RBIs from five different players en route to a 4-1 win over Foley.

The Mudcats took control in the fourth inning with two runs for a 3-0 lead, capped by a sacrifice fly from designated hitter Greg Faue. He went 2-for-3 at the plate as the only Mudcats hitter with multiple hits.

“It’s a great lineup from top to bottom, so everybody chips in,” Faue said.

Prior Lake jumped ahead in the top of the first inning when second baseman Luke Webber scored on an error. Mudcats pitcher Ben Morrison kept Foley in check throughout with eight strikeouts and five hits allowed.

Most of Foley’s hits came later in the game in an effort to rally. Jacks second baseman Sam Keeler scored relief pitcher Drew Beier on an RBI double for the team’s lone run of the day.

Beier came into pitch in the ninth inning and got his team out of a bases loaded jam. He led off the bottom of the inning, and the Jacks got two base runners on eventually but couldn’t get any further in the loss.

Luke Kramer had his way pitching as Bird Island advanced 1-0 over Dumont.

The Bull Frogs pitcher retired 11 straight batters at one point as he held the Saints to two hits and two walks in eight innings. He also fanned 13 batters in the win, using fastballs and sliders.

Kramer made his first start since pitching an 11-inning marathon in the Region 4C loser's bracket Aug. 10, a 2-0 win over Starbuck. He had a 1-0 lead to work with this time around from the second inning on, but he said he approached it the same way — focusing on what he needed to do on the mound.

Bird Island grabbed the only run it needed in the top of the second inning when designated hitter Jack Peppel singled to score first baseman Tyler Hebrink.

Dumont shortstop James Paul and center fielder Patrick Kussats had their team’s lone hits for the game. The Saints threatened in the bottom of the ninth inning with two base runners who reached by walks, but Bull Frogs relief pitcher Logan Nissen closed the deal with a strikeout and a groundout. Saints pitcher Nate Albrecht kept his team hanging around, striking out three batters and allowing seven hits in a complete-game loss.

Bird Island advances to face Jordan 7 p.m. Aug. 24 in Delano for the second round.