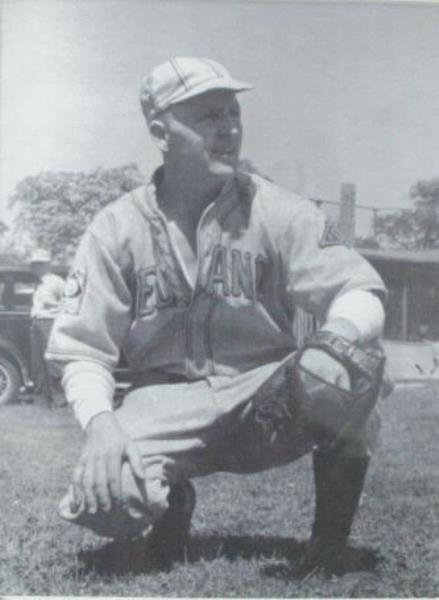 This story and several more are featured in the 2019 MBA Class B and C state tournament program. Be sure to pick up a copy of the program at one of the three sites this weekend.

In 1935 the United States was still in the grasp of the depression; Franklin Delano Roosevelt’s New Deal initiatives were attempting to put America back to work and Benny Goodwin was introducing a new type of music called swing. This was also a time when Americans in both big cities and small towns looked to baseball to provide something to rally around.

Town team baseball returned to Delano in 1935 after an absence in 1934. Delano became part of the Crow River League, which included Chaska, Norwood, St. Bonifacius, Watertown, Waverly, Cologne, Mayer and Young America. A parade was part of Delano’s home opener on May 19 with city officials, men from the fire department and players from both teams winding their way through town and toward the newly renovated baseball field. Home plate had been moved a bit southwest to create better spacing in the outfield. Improved bleachers were added for more seating and wire fencing had been installed to protect spectators. Mayor A.C. Progreba threw out the first pitch to Fire Chief Al Schumacher to welcome baseball back to Delano.

Led by four players who would be selected to the North Star League Hall of Fame, Delano put a formable team on the field. Ace of the staff was lefty Ralph “Buzz” Berneck. Valentine “Dutch” Styrbicky batted third and played shortstop, second base and pitched. Van Merriman played center field and was the leadoff hitter. Perry Ditty batted cleanup, played third base and was the first of many in his family to step into the batter’s box representing Delano. Rounding out the roster was catcher Cordy Buaer, Rice in right field and Kuntz in left field and Klatt playing shortstop.

Delano hovered between fourth and fifth place most of the summer. Games started in mid-May and were played well into August. The climax of the regular season was when Delano faced league perennial powerhouse Chaska for the right to advance to the state tournament. Delano needed to beat Chaska twice for this to happen. In the first game, Delano threw their ace Berneck. Chaska jumped out to an early lead, tagging Delano for a run in each of the first two innings and again in the fourth  to build a 3-0 lead going into the top of the fifth. Delano scratched across a run in the fifth inning, however, Chaska answered back, swelling its lead to 5-1 going into the top of the ninth inning. Delano rallied as hits became contagious, plating 10 men in the inning and surging ahead 11-5. Chaska scored one in the bottom of the inning to make the final 11-6, there would be another game to be played the following week — this time in Delano.

More than 2,000 fans packed into the Delano baseball field on Sept. 15, 1935 for the Crow River League Championship. This day would be a pitcher’s duel with both Berneck starting again for Delano and Von Dell taking the mound for Chaska. Chaska again struck first with runs in the second and fourth innings to build a 2-0 lead. Delano again did all of its scoring in one inning — the seventh inning. Delano with No. 9-hitter Welhe, Merriman and Styrbicky strung together hits, leading to Delano pulling ahead 3-2. Berneck limited Chaska to only four hits and shut down the team the remainder of the game, notching a 3-2 victory and a trip to Lexington Park in St. Paul.

Delano faced Gibson in its first state tournament game. Erickson from Norwood, who had pitched so well against Delano in the regular season, was drafted to be added to the tournament team and pegged to be the starting pitcher in game one. Delano went through four pitchers but slugged out a 8-6 victory on the strength of Ditty, who had three hits, including a triple.

Next up was an 11 a.m. game against Alberta, in which Delano fell behind early for the third straight game. Trailing 2-0 in the top of the fourth inning, Delano struck for two runs, knotting the game. The game stayed tied until the top of the eighth inning when Delano struck for two more runs, creating a 4-2 lead. Berneck shut down Alberta the rest of the way. A 4-2 victory moved Delano into the semifinal game to face Red Wing. Berneck struck out 10 opposing batters while surrendering only six hits. Big man at the plate for Delano was shortstop Happy Boll (St. Boni draftee), who had three hits, including a double and a homerun tallying three RBI as well.

The following week Delano faced Red Wing at Lexington Stadium. Delano started fast by scoring three runs in the top of the first inning on a walk from Styrbicky, a triple by Boll and a single by Bruhn. Red Wing answered with a run of its own in the bottom of the first. Delano added another run to extend its lead by three runs, leading 4-1 going into the bottom of the fifth. Red Wing’s bats then woke up, scoring three runs helped by two Delano errors. Red Wing’s pitcher Molock had found a grove after the second inning, throwing six shutout innings to bring Red Wing into the top of the ninth tied with Delano 4-4. Delano pulled ahead in the top half of the inning but let the lead slip away as Red Wing scored two in the bottom half ending Delano’s state tournament bid.

Delano’s first season in the Crow River Valley League resulted in 20 wins with only six losses and one tie. Earning a trip to the Minnesota State Amateur Tournament to play on Lexington Field in St. Paul and coming one game away from a chance to win the title solidified this team’s place in the community’s heart. As the 2019 participants walk out from the dugouts and unto the green grass, and brush away chalk stepping into the batter’s box, know that same routine occurred 84 years ago by the likes of Ditty, Buzz, Dutch and Merriman on this same field.