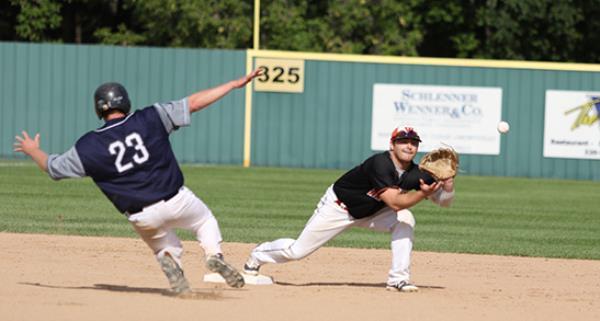 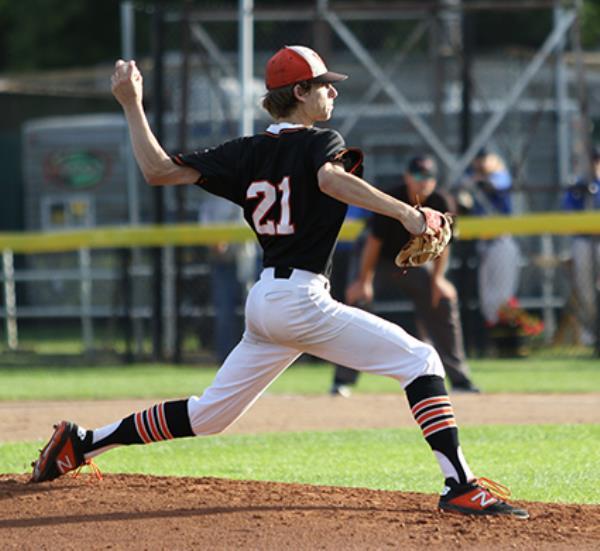 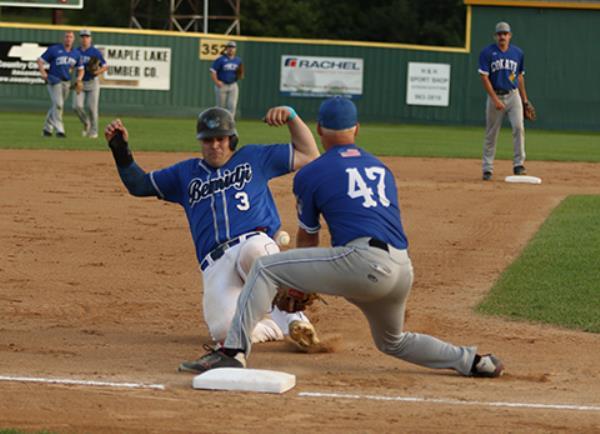 By James Stitt and Nick Gerhardt

The five-run first inning between Cokato and Bemidji seemed to promise a lot of offense, but no more runs would cross the plate as each team's pitcher settled in to shut down the opposing teams. Bemidji's draftee from the Ada A's, Ethan Opsahl, pitched seven innings in relief with eight strikeouts while allowing only four hits and two walks after subbing in for Brenden Gillies, who left in the third after no hits, no earned runs and three strikeouts, as the Blue Ox won 4-1.

The Kernels scored first after their leadoff batter Eric Pokornowski walked and moved to third on a pair of mistakes from the Blue Ox defense. A sacrifice fly from Tom Halonen then plated the first run of the game and gave Cokato the 1-0 lead.

The Blue Ox responded in the bottom half of the inning with four runs. Mitch Hendricks singled and seemed to be stranded after two quick outs. But three two-out hits and a couple of errors had Bemidji building a 4-1 lead early. Connor McNallan doubled to score the first runner and Ben Thomas singled to plate McNallan. Collin Rutledge singled to plate another and the throw went out of play to send another runner across.

Cokato pitcher Vinnie Pokornowski settled in after the tough start, with only two hits over the next 7 1/3 innings on the mound, including five consecutive hitless innings for the Blue Ox from the third through the seventh inning.

Cokato tried to get a few runs back in the fourth before the Bemidji defense got a series of tough outs to keep the Kernels from cutting into the lead. Isaac Nelson singled and Billy Aho walked to put runners on with no outs. Opsahl then picked up the bunt attempt down the third base line and got the lead runner out in a close play before striking out the next batter. A wild pitch put the runners on second and third where at least one Kernel would have scored if not for a leaping catch at third base from Ben Thomas that ended the inning with no damage done.

The Kernels again threatened in the eighth after a walk to Jake Smith and a single by Isaac Nelson had runners on the corners, but once again Cokato was turned away without a run.

Cokato again found itself in position to get back in the game in the ninth. Luke Morris walked and Sanders Asplin singled, with an error moving Morris over to third. Just like previous innings, the rally was not to be as Opsahl forced a double play to end the game.

The Waterville Indians certainly have a flair for the dramatic this postseason, with their last two games going down to the final pitch. Last week, it was a walk-off home run that flipped a 2-1 loss into a 3-2 win, on Saturday it was three consecutive outs after the leadoff runner got on base to start the ninth inning, giving the Indians a 1-0 win.

With both pitching staffs feeling it on Saturday afternoon, runs were at a premium. Jake Dykhoff of Bluffton went the entire game with eight strikeouts and scattering six hits across nine innings. Waterville's Luke Sellner went seven innings with five strikeouts while allowing only four hits.

Things did not get any easier for the Braves when Bladyn Bartelt entered the game for Waterville in the eighth, as the reliever struck out the side in his first inning on the mound before ending Bluffton's season in the ninth inning.

Justin Dykhoff battled at the plate against Bartelt, earning a walk after an eight-pitch at-bat. Undeterred, even when the the tying runner moved over to second, Bartelt got the big outs with a pair of strikeouts and an easy grounder to end the game and give Waterville their second consecutive win in the final innings.

The lone run came in the first inning, when Sam Stier got on base with a single before stealing second, setting him up for a good cushion when heading around third on a single from Shane Sellner.

The Indians came close to scoring again in the sixth, putting runners on second and third following a Ty Kaus single, a walk to Stier and a wild pitch. Bluffton buckled down to get the final outs without any harm done.

In the seventh it was Waterville's turn to end a scoring opportunity. The Braves had a pair of runners on after a single to Kyle Dykhoff and a hard hit ball by Skyalr Mursu. But with two outs, Luke Sellner struck out the final batter to end the threat from Bluffton, stranding the Braves fifth and sixth runners through seven innings.

All it took for Fairmont to beat Lake City was a two-run home run from Levi Becker in the fourth inning Saturday in Maple Lake.

Well, it took a little more than that but that shot accounted for all the runs for the Martins as they advanced to face Waterville next Friday at 7:30 p.m. in Delano. The Indians didn't need much offense either in a 1-0 victory over Bluffton Saturday in Maple Lake.

Lake City cut the deficit in half in the sixth inning after Austin Baab singled with one out and Jacob Fletcher doubled to give the Serpents two runners in scoring position. Baab scored on a ground out to make it 2-1 but Collin Lovell, a draftee from Windom, got a ground ball to get out of the inning for the Martins. Lovell went all nine innings and allowed just the one run on six hits on 99 pitches. He struck out nine and did not walk a batter.

Fairmont finished with just four hits with Becker, Tyler Tennyson, Jon Traetow and Sam Schwieger collecting them.
Jon Traetow walked to start the fourth inning for the Martins and Becker hit his home run on a 2-0 count.

Kyle Sursely started for Lake City and lasted just five innings. Sursely gave up two runs on three hits, walked five and struck out eight before giving way to Tyler Zemla, a draftee from the Rochester Roadrunners. Zemla threw three innings in relief and gave up just one hit, walking one and striking out four in that span.

Jacob Fletcher led the Serpents with two hits and Hunter Baab had a hit to go with his RBI groundout. Logan Thomas and Zach Wolfe had the other hits.

Cologne continued to squeeze the most out of it first trip to the state tournament in 47 years with a 2-0 victory over Region 8 champion Nisswa Saturday in Maple Lake.

The Hollanders executed a squeeze bunt in the seventh inning when Joey Lilya laid down the bunt and pinch runner Kyle Twait came sprinting home to give them a 1-0 lead. Cologne, the No. 3 seed from Region 7C, added to the lead when Tim Swanson, who doubled to advance Twait to third, scored on a passed ball to make it 2-0.

That's all Christian Johnson needed for the Hollanders. Johnson threw a complete-game one-hitter to send Cologne into Labor Day weekend. Johnson struck out eight and walked one while facing just three over the minimum.
Nisswa threw Nate DeChaine and he went 6 ⅓ innings and allowed two runs, one earned, on three hits. He walked three but struck out seven in that time. Jason Roepke threw the final 2 ⅔ innings and allowed three hits. He walked one and struck out two.

Swanson finished 2-for-4 with a run and an RBI while Tanner Luebke, Anthony Brenner, Zach Nelson and Lilya each had base hits.
Brenner singled with one out in the seventh to start the rally before Swanson doubled and Lilya laid down the bunt.

The Hollanders will face Bemidji, which defeated Cokato 4-1 Saturday, at 1:30 p.m. next Saturday in Delano.