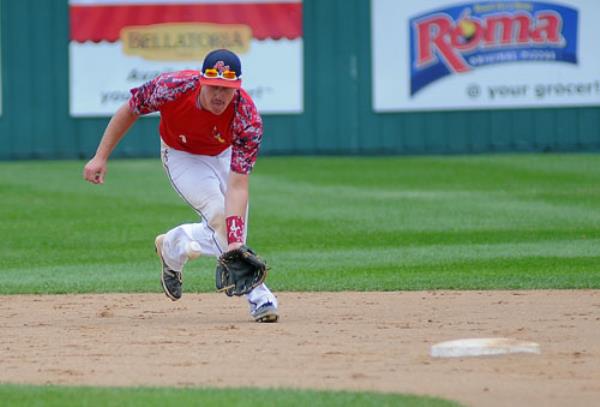 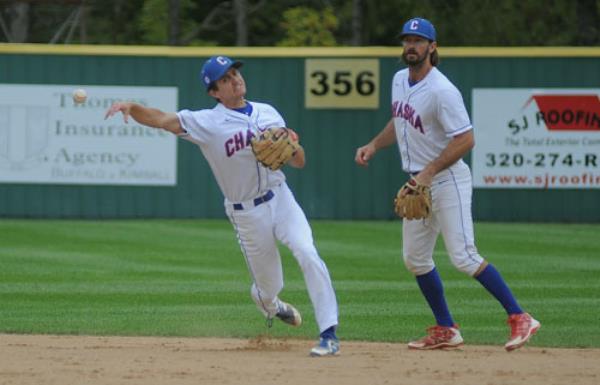 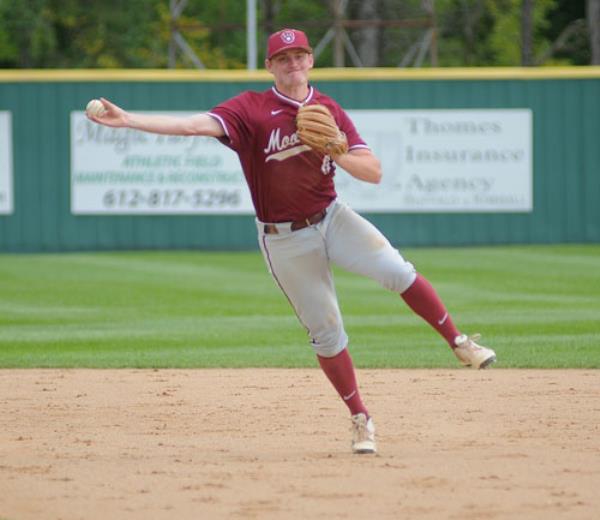 Class B roundup at Maple Lake: Chanhassen rallies in the 14th to beat Moorhead
Posted on Aug 31, 2019

Matt Smith was 0-for-5 when he stepped to the plate in the bottom of the 14th inning Saturday night at Irish Stadium in Maple Lake with runners at first and second and an 0-1 count. The Chanhassen Red Birds’ catcher drove David Ernst’s 92nd pitch of the game into left field. The ball dropped in front of Moorhead left fielder Matt Oye with Aaron Pfaff rounding third. The throw was wide and when Pfaff slid head-first across home plate, the Red Birds’ bench erupted. Chanhassen eliminated the Brewers with a 2-1 victory.

With starters Brook Lyter for Moorhead and Dominic Reed for Chanhassen locked in a pitchers’ duel, the game was scoreless until the sixth, when the Brewers scored on a double by Oye, a Reed wild pitch and a sacrifice fly by Mike Peschel. The Red Birds knotted it in the eighth with an unearned run against Ernst. Aaron Kloeppner led off the inning with a shot to right-center. Brandon Arnold moved him to second with a sacrifice bunt, and he scored on an error by Brewer shortstop Nick Salentine.

Miles Nablo relieved Reed after 11 innings. Reed allowed one run on two hits with one walk and one hit batter. He set down 11 in a row during the first four innings and 12 in a row after issuing a walk in the seventh. Nablo blanked Moorhead in the 12th, 13th and 14th innings to earn the victory. He struck out three.

Pfaff, who got aboard in the bottom of the 14th on a five-pitch walk, went 2-for-4. Justin Anderson was 0-for-4 through nine innings, but singled in the 12th and 14th to end up 2-for-6. Oye’s double and a first-inning single by Tanner Adam were the Brewers’ only knocks.

Ernst entered the game in the eighth inning, relieving Lyter, who had blanked the Red Birds through seven innings on three hits and issued a pair of walks. At that point he had thrown 95 pitches. Ernst, who had thrown 110 pitches earlier in the day during the Brewer’s 6-5 win over Miesville, added 92 in this one, bringing his total for the day to 202. He can give his right arm a good long and well-deserved rest now.

Chanhassen, which lost 6-1 to Blaine on Friday at Dassel, now awaits the loser of Blaine’s matchup with also-unbeaten Dundas. The Dukes and Fusion play at 4:30 pm. Sunday, Sept. 1 at Delano. The Red Birds are scheduled to play the loser of that game at 7 p.m., also in Delano. The winner of that one will need to beat the Blaine-Dundas winner twice on Monday, Sept. 2, with the first game set for 1:30 p.m. at Maple Lake. The Red Birds won last year’s Class B title and remain alive in their quest for a repeat.

Logan Spitzack hurled a three-hit complete game shutout Saturday afternoon at Irish Park in Maple Lake and his Chanhassen Red Birds stayed alive in the Class B state tourney. The Chaska Cubs were eliminated in a 2-0 game that was scoreless for six innings.

The Red Birds were stymied through six innings by right-hander Pete Ohnsorg, who had spread four singles over that span. With one out in the seventh, Aaron Kloeppner slapped one into the right-center-field gap, but was limited to a single. He promptly stole second, then advanced to third on a fly-out to center off the bat of leadoff hitter Brandon Arnold. With Garret Fischer batting, Kloeppner took advantage of a passed ball and sped home, with what turned out to be the winning run. Fischer doubled to the gap in right-center and scored on a single to right by Mike Jurgella. Riley Johnson hit a smash, which Cubs’ third-baseman Steve Edelefsen snared, diving to his right, ending the scoring.

Spitzack struck out nine, allowing only two free passes. He retired 18 in a row. Tyler Polster brought that streak to an end with a one-out single in the top of the eighth.

The closest Chaska came to scoring was in the top of the first. Mike Edlefsen led off the game with a hit to right-center and swiped second. One out later, Matt Halloran drew a walk and both runners advanced on a passed ball. Spitzack then fanned Chaska clean-up hitter Chase Hentges and then Polster smashed a ball that Chanhassen shortstop Brandon Arnold snagged diving to his right for the third out.

The Moorhead Brewers scored  seven times in the first four innings, then hung on to beat the Miesville Mudhens 7-6 Saturday afternoon at Irish Stadium in Maple Lake.

Down 7-5 in the bottom of the eighth, Miesville’s Max Morris drew a two-out walk to put the tying run at the plate. Two pitches later, Ernst got Dylan Blake to hit a grounder to second. Jake Faircloth tossed to shortstop Matt Oye for the force at second, putting an end to the threat.

Steve Maher came on for the Mudhens in the middle of a fourth-inning Moorhead rally. The Brewers got four runs on five hits in that inning to break the game open and end the afternoon for Miesville starter southpaw Shannon Ahern. Maher retired 16 in a row to close out the game, but his teammates came up one run short. He allowed three of Moorhead’s 13 hits, fanning three and walking none. He did hit two batters.

Mike Peschel led the attack for the Brewers, going 3-for 4, scoring twice. Nick Salentine (2-for-4) also scored a pair of runs. Jeremy Peschel went 2-for-4 with a double. Spencer Flaten drove in two to pace the Brewers.

Joey Werner drove in three of the Mudhens’ six runs on a 2-for-4 afternoon. Deryk Marks had two RBI despite an o’fer.

Mark Moriarity (1-for-3) and Matt VanDerBosch (1-for-4), both scored twice for the Mudhens. Werner doubled twice and drove in three for Miesville.