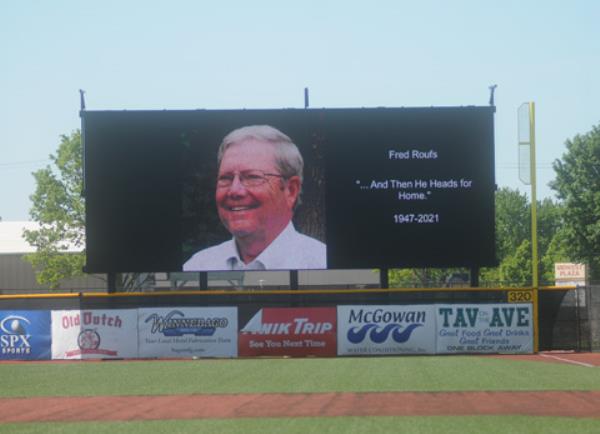 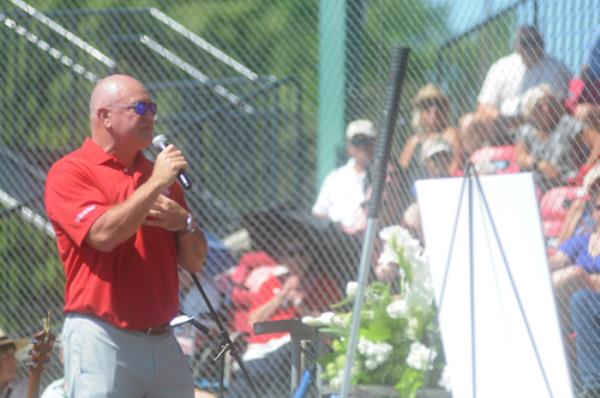 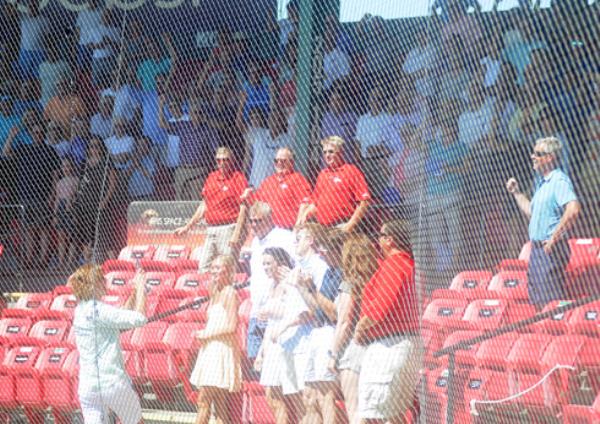 Franklin Rogers Park in Mankato is nicknamed “The Frank” but on Saturday it was “The Fred” for Fred Roufs.

Amateur baseball’s ambassador got waived around third and headed for home Jan. 12 after succumbing to COVID-19 and Guillain Barré Syndrome at age 73. Only a ballpark could accommodate the friends and family who came to celebrate his life and only a ballpark could provide the setting for a man who spent so much time at the park.

He guided amateur baseball through its most challenging season as the board sought to play ball within emerging and changing COVID-19 protocols.

“I’m not going to be the only damn president to not have a state amateur season,” he told MBA Secretary/Treasurer Mike Nagel.

Behind the scenes, Roufs lobbied state legislators and worked with public health officials to make sure the MBA held a state tournament in 2020.

“I can honestly say that without Fred Roufs running our ship, we would not have had baseball in the summer of 2020,” Nagel said.

Roufs had a pulse on amateur baseball through conversations with players and managers throughout the state as well as commissioners and league secretaries. Not only that, Roufs made a point of attending amateur baseball games far and wide from his home in Mankato. As president of the MBA, he opened each meeting by asking board members what they’re hearing from players and managers.

During board meetings when the board needed to reference something from the past, Roufs often dug into his bag of MBA materials that went as far back as his first year on the board to find the answer.

Following Roufs’ death, the MBA board renamed the state tournament MVP award as the Fred Roufs Memorial MVP award. The MBA will also hold a memorial golf tournament on the Thursday before the start of each state tournament moving forward to honor Roufs, who routinely golfed with board members on the Thursday before the start of state tournaments. Proceeds from the tournament will go toward the Fred Roufs Endowment Fund, which benefits a Minnesota State University, Mankato baseball player and a wrestler within the College of Business at the school. The endowment has a goal of $52,000 for the first year and $2,000 will be distributed this fall.

Roufs held several honors, including induction into Minnesota State University, Mankato Hall of Fame in 2012 after years of supporting athletic programs at the university where he wrestled as a student. He and his family moved to Mankato in 1990 following a promotion to divisional vice president with IDS/Ameriprise.

Roufs started his career as a financial planner with IDS/Ameriprise in Marshall in 1976 and became active with the Marshall Baseball Association. He helped lead efforts to improve American Legion Field, coached American Legion baseball and often served as public address announcer. The Marshall Baseball Association selected Roufs as part of its inaugural hall of fame class in 2015.

In 2010, his alma mater, Le Sueur High School, honored him by inducting him into its wrestling hall of fame.

An effort to bring Roufs to the Minnesota Amateur Baseball Hall of Fame started prior to his death and he likely would’ve been inducted if not for the cancelation of the ceremony last year due to COVID-19. The push for the hall of fame continues and Nagel led a standing crowd in a chant of “Hall of Fame” Saturday for further endorsement as the hall of fame selection committee makes its picks next week. The hall of fame ceremony will take place Sept. 18 in St. Cloud.

Roufs is survived by his wife, Susan, of 52 years, his daughter Jennifer and son Jayson.

Those interested in contributing to the Fred Roufs Baseball and Wrestling Scholarship can do so here.

Marshall will hold a celebration of life event for Roufs June 11 at 7 p.m. before a Marshall A’s game against the Milroy Yankees. More information can be found here.