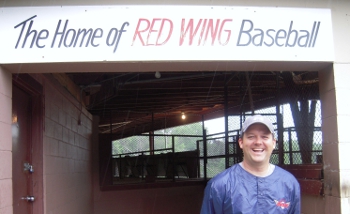 Teddy Tauer is going to make some money this year.  After seven years as the batboy for the Red Wing Aces, the 11 year old is giving up his batboy duties, freeing him up to chase foul balls for the 50 cent reward.  That's because his dad, Corey Tauer, is retiring as a player and manager for the Aces.

Corey has been playing amateur baseball in Red Wing since 1989 when he debuted with the Red Wing Scarlets. He was 16 years old and got a chance to play with the Scarlets alongside his brothers John and Jay.  The highlight of the season was a Jay to Corey to John double play involving all the Tauer boys.

The next year, the Scarlets were history.  The Aces were so strong that Corey wasn't even on the team--he only played Legion ball--and the Aces won the State Tournament in New Ulm.  In 1991 he joined the Aces and the rest is history.  He played 20 seasons with the Aces.  In 2,817 at bats he had 1,069 hits for a .379 average.  He hit 124 home runs and drove in 901 runs.  He was named to the all-state tournament team three times.

In 1993, the Aces made the State Tournament in St. Cloud and Cold Spring.  Even though they lost to Miesville in the winners' final, the Aces came back to beat Miesville twice on Labor Day to claim their fourth State Championship.  They scored the winning run when Corey doubled to drive in brother Jay in the bottom of the ninth.

In 2001 Corey hit seven home runs in the State Tournament and tied a record with three home runs in one game (a 13-9 loss to eventual champion Cold Spring).  That tournament was in Red Wing and Patrick Reusse had come down to write an article on Tom Arnold.  When Corey had a big game, the focus of the column changed to him.

2003 brought a big change to Corey and the Aces.  He became manager of the Aces.  Even with all the added responsibilities, it didn't seem to bother Corey.  The Aces cruised through the season, making the State Tournament in Northfield and Dundas. Over the next seven years, Corey took the Aces to the State Tournament two more times.

The Aces won 194 games with Corey as the manager.  “I felt playing and managing in Red Wing was very unique. We naturally have an incredible setting within the bluffs of Red Wing that makes the ballpark a beauty.   We have many volunteers that have put in the effort to make it as enjoyable for the players as possible,” said Tauer. “You don't get many opportunities as an amateur athlete to play a sport you love in front of hundreds of people on a regular basis. We worked hard to get people to the games and make it a family atmosphere. We have had newspaper and radio coverage that is unmatched in the state,” Corey continued.

Dan Plein, former Aces manager and current bench coach for the Aces, said this about Corey: “Corey did so much for Aces baseball both on and off the field.  He was truly a great representative of Aces baseball. In his prime, I think he was one of the most feared hitters in Minnesota amateur baseball. We here in Red Wing were very fortunate to have Corey be involved for so many years. He had many opportunities to play elsewhere, but his ties to Aces baseball with his Dad, Dewey and with brothers Jay and John kept him playing in Red Wing. We were the winners in that deal.”

One of the passions in Corey’s life with Red Wing Baseball is the Dewey Tauer Tournament that has been held every year since 1988.  It was started to honor his father, Dewey, also a former player and manager with the Aces.  Dewey managed the Aces from 1973 to 1982 and died unexpectedly on July 24, 1985.  Dewey was only 43 when he passed away and Corey was 12.  “He was my idle and best friend,” said Corey.

The tournament began in 1988 and for most of its run has tried to incorporate some of the strongest B teams in the state. Since 2000 the Aces have gone 27-5 in the tournament and won it 6 times. “What I appreciated most about the tournament was not the winning, but the commitment that the players and our Board have put into the tournament,” said a proud Corey Tauer.

Corey’s brother Jay played with the Scarlets starting in 1983 and moved to the Aces in ’89. So there has been a Tauer involved in Red Wing Baseball since 1973. Now the Aces will have to wait five or six years to get another Tauer (Teddy) into the lineup.  Maybe the CCVL teams can breathe a little easier for the interim.

Tauer said that he will spend his time this summer coaching Teddy’s team and trying to help out with Red Wing Youth Baseball in general.  He’s not going to give up playing altogether though.  He plans to play with the Burnsville Bulldogs over 35 team.

“I will miss it, both on and off the field,” said Corey. “I just want to thank my teammates, managers, opponents, umpires and fans that came out and supported amateur baseball while I was a player and a manager. It was an experience that I will never forget as it created hundreds of friendships that will last a lifetime.”