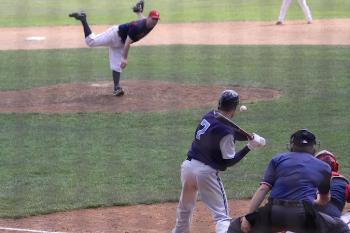 The 2012 Northwest Amateur Baseball Championships were held this weekend in Fargo-Moorhead and the Shakopee Indians of the River Valley League East claimed the title Sunday with a 6-4 victory over a divisional foe – the Victoria Vics.

Indians starting pitcher Aaron Olson stole the show in the championship game and was named the tournament MVP. He tossed all seven innings, allowing four earned runs on eight hits, including six walks and one strikeout. Olson also led Shakopee at the plate, going 3-for-4 with two doubles, a run and the go-ahead RBI. Pat Lenton also had a multi-hit game for the Indians with a 2-for-3 performance, including a double and an RBI.

Kyle Voltin took the loss for the Vics in relief. After starter Chris Thulin went three innings and left with a 3-3 tie, Voltin gave up the go-ahead run in the top of the fourth. The Vics responded in the bottom of the frame to knot the score at four, and after a scoreless fifth, Shakopee strung together two runs in the sixth off Voltin to secure the victory. Voltin went two and two-thirds innings and allowed three runs (two earned) on four hits, including five walks and four strikeouts.