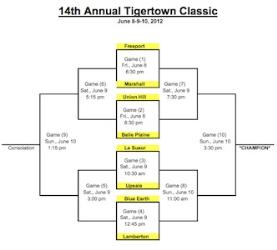 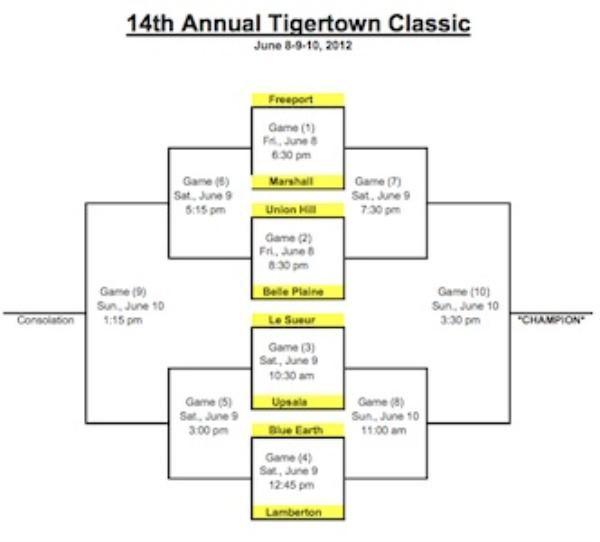 Freeport, who opens the invitational against Marshall on Friday at 6:30 p.m., enters with a 7-2-1 record, including three-straight wins. The Black Sox hope to get in a full weekend tournament, as their own invitational was rained-out on the final day, marking two consecutive years a champ couldn’t be crowned outright in Freeport.

Marshall lost its first game of the year on Wednesday night, falling 6-5 to the Sacred Heart Saints. The A’s are 7-1 and have outscored their opponents 80-22. The Southern Minny League members are led at the plate by a trio of sluggers – Jordon Kontz, Tyler Flattum and Andrew Kinney. Kontz is hitting at a .500 clip (12-24) with 7 RBI, Flattum (.457) has a team-high 16 hits, while Kinney (.448) leads the club with four home runs, 16 RBI and a .966 slugging percentage. Nate Bickhausen is the ace of the pitching staff with a 3-0 record and 0.98 ERA in 18 and one-third innings. He also has a 7:1 strikeout-to-walk ratio.

The host-Tigers are 7-2 to start the 2012 campaign. Shawn Larson and Dan Huber have been constants for the Belle Plaine offensive attack. Larson has a .308 average in seven games, while Huber has played in every game this year and leads the team with 7 RBI. Both Brad Lawson and Shane Hofmann have logged 22 innings on the rubber. Lawson has a team-best 0.82 ERA and is 3-0. Huber is 2-1 with a 2.45 ERA.

On Saturday at 10:30 a.m., Le Sueur will take on Upsala. The Braves will look to rally behind the arms of Matt Lewis, John Shaffler and Jordan Sinell. Lewis was lights out in his last appearance on the mound, striking out 17 against Gaylord on June 1. Lewis, along with Drew Dawson, will be relied on to produce at the plate as well.

Second round winner’s and loser’s games start at 3:00 p.m. Saturday and championships match-ups will take place Sunday at 1:15 p.m. (consolation) and 3:30 p.m. (championship).

Marshall is the two-time defending champ after topping Belle Plaine 4-3 last year and Blue Earth 8-2 in 2010. Union Hill claimed the title in 2009 with a 12-5 victory over Blue Earth after the Pirates won it the year prior over Freeport 8-1.

I’ll take Marshall for a third year in a row with a win over Blue Earth. Take the poll here.