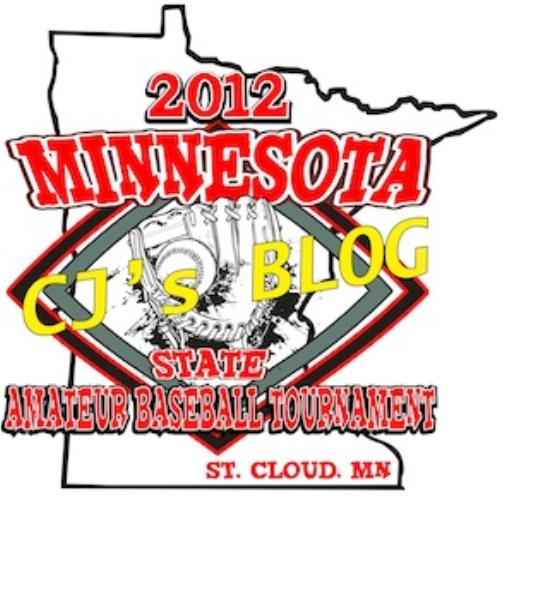 CJ’s Blog is back for Championship weekend of the 2012 State Tournament at St. Cloud’s Dick Putz and Joe Faber Fields.

My aim is to give you an inside look on all the "behind the scenes" action at State and my first-hand experiences.

I'll try to post a new entry a few times each day throughout the tourney, so check back often to see how it's going. I'll keep each entry in the same article, but will change the title with the most recent update's time [Updated 9/1: 10:41 p.m.] so that you'll know when a new entry has been posted. Also, I'll try to keep the MBA Facebook and Twitter pages fresh, so be sure to follow there as well.

Good luck to all the teams and we'll see you at the park!

10:41 p.m. – First off, I’d like to apologize for not mentioning that I would be out of touch with the State tourney for Friday’s and Saturday’s games because of a work conflict. I had the pleasure of covering the Wildwood Lodge Volleyball Classic the past two days in my full-time role as graduate assistant sports information director at Concordia University, St. Paul. I literally raced up here to St. Cloud after the final volleyball game of the day and hopefully I can get you – as well as myself – up to speed on what’s been going on here.

Last night the Class B tourney resumed and here are the results:

Dundas eliminated Mankato with a 3-2 victory, Victoria ended Red Wing’s season with a decisive 13-6 win, and the game of the night was easily awarded to Cold Spring and Chaska. Cold Spring outlasted Chaska in a 15-inning affair by a score of 3-2.

Today started out with a bang for Class C as Avon’s Kyle Collins threw the first no-hitter at the State tourney since 2002 when Bill Dunker did so with St. Patrick in a 6-3 win over Pierz. Dunker had six walks and 10 strikeouts as a draftee from Eagle Lake.

Ten years later, it’s Collins with the gem. Collins struck out eight and walked one in 29 at-bats as he led the Lakers to a 1-0 victory over the Cannon Falls Bears. Congrats, Kyle.

Fairmont defeated Bird Island 2-0 behind a complete game shutout by Shaun McGuire who gave up only four hits with nine Ks and one walk.

Maple Lake advanced to the Elite Eight by defeating Blue Earth 4-2 behind another stellar pitching performance – which seems to be the theme of the day. Jeremy Schmidt went the distance allowing two runs on four hits with six Ks and three walks. Lee Hodges went into the eighth for the Pirates and took the loss before being relieved for by Aaron Wendt.

In what comes as no surprise if we follow the status quo, Lastrup’s Chad Weiss and Waconia’s Chris Bullis went toe-to-toe in a showdown of complete game chuckers. Weiss won the battle, though, by giving up just one run on one hit with seven strikeouts and one walk as the Lakers defeated the Lakers 2-1 (Okay, that might be confusing. Lastrup won…). Bullis suffered the loss allowing two runs on seven hits, striking out four and walking two.

Even in the extra-inning game, we saw a pitcher go the distance as Howard Lake topped Waterville 2-1 in 10 innings. Waterville’s Brian Welch took the loss after nine and two-thirds innings, allowing 10 hits for two runs. Chris Hardie picked up the win after one inning of relief for Adam Koch, who tossed nine with as many strikeouts.

The highest scoring game of the day predictably was the one that didn’t see a pitchers’ duel. Fergus Falls came out the victor in a 5-4 decision over Milroy. Bryan Jacklitch led the Hurricans at the plate with a 4-for-5 performance, including two runs scored.

Last but not least, Sobieski shut out Winsted 4-0. Waiting on the stats right now, so come back later for a recap.

Now that the Elite Eight is set, here are the match-ups for Sunday’s action:

Tomorrow’s Class B games are as follows:

Okay, I think we’re all caught up. See you all at the park tomorrow.

12:33 a.m. - After a full day of baseball, tweeting, photo taking, score reporting, article writing and insert other webguy duties here (_____), I'm simply going to point you in the direction of these links of what's gone on today.

With that I say good night.

11:57 p.m. - I'm not going to post a long in-depth entry right now because I'm simply burnt out, but so you know, I will give my insights on the 2012 State tourney soon. At this point, though, I’ve had enough baseball over the past three weekends.

All I want to say at this point is that I enjoyed every minute covering the tournament. There were some great games and I met a lot of great people that love the game just as much as I do.

Congrats to Maple Lake and Victoria, you guys earned it.

Chad, I hope the local watering hole treated you and yours well.

Mike, it all came together tonight so enjoy every minute of it. You never know if this opportunity will come again. And thanks for representing the River Valley League, undoubtably the best Class B league in the State.

I would like to leave you on this note. Victoria lost to only one Class C team all year. Can you name that team? That’s right, the St. Peter Saints defeated the Vic’s 7-6 in 13 innings back on June 19 at Veterans Field. Here’s the highlight of the night :)