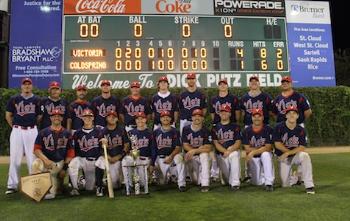 ST. CLOUD, Minn. - The Victoria Vic's claimed their first-ever State title with a 5-3 win in game one and 4-1 win in game two against Cold Spring in the 2012 MBA Class B State Championship Game on Monday night at Dick Putz Field.

After losing to Cold Spring 4-3 in the second round at the Springers’ home park, the Vic’s bounced back and won five-straight for the title, facing elimination in each game. They beat Red Wing 13-6, Dundas 8-3 and Chaska 9-3 before sweeping Cold Spring in the two championship games.

“It feels great,” manager Mike Poppitz said. “You know this team here is just amazing. It seems like the more they play, the harder they play and the better they hit. We lost that game in Cold Spring and they weren’t down, they just said ‘hey, now we just got to run four in a row and let’s play some ball,’ and they did.”

When it came time for game one of the Class B title, the key match-up was clear – which would be better – Victoria’s hitting or Cold Spring’s pitching? And the Vic’s bats answered that question with 11 hits, including two doubles and a home run to force game two.

Erik Winegarden was the offensive leader for Victoria in the first game, going 2-for-4 with three runs, two RBI, a double and a home run.

In game two, the Victoria pitching stole the spotlight from an already shining offensive show. Buddy Flaherty started the game and gave up one run (unearned) on four hits in three innings of work. Miles Campbell came in relief and simply shut down the Springers. Campbell didn’t allow a run in the final six innings and gave up just two hits. He struck out three and walked none, facing three batters over the minimum.

“At the end of the game, I still had four guys that wanted to throw,” Poppitz noted. “You don’t have that a lot. There are some coaches that sit in their dugout and think, ‘I’m screwed, there’s nobody left.’ And I’ve got three to four quality guys that are ready to come in the game.

“We built a team and a staff. It took us a few years to get it all together but we’re there now. Hopefully we can stay there for a couple more years.”

Winegarden was once again the leader at the plate. The Vic’s catcher went 2-for-4 with two RBI, a run, walk, stolen base and home run. Throughout the whole tourney, Winegarden hit at a .366 rate (15-41) with an on-base percentage of .469, including 15 RBI, four doubles, three home runs, eight walks and three stolen bases. He also fielded at a .947 clip with 71 putouts. For his outstanding performance, Winegarden was named the tournament’s MVP.

“Erik has been with me since he was 18 years old,” Poppitz acknowledged. “He left for four years when he was with the Philadelphia Phillies organization, came back and he’s worked his ass off to be back where he was seven or eight years ago. He handles the pitchers extremely well. He coaxes the most out of the pitchers you can get and I trust him. When I walk out to the mound I usually ask two questions, what was that last pitch and does he have anything left? He tells me the truth. He’s just a good hard-nosed baseball player.”

The Vic’s finish their season at 38-12 overall with their first State Championship in team history in only their second appearance at the Fall Classic – their last was in 1981.

A lot of credit goes to Poppitz for sticking it out through some tough years in Victoria. He’s assembled a championship-caliber team that hopes to remain competitive for a few more years to come, along with adding youth.

“I see the squad sticking around,” Poppitz said. “I think there may be a couple more guys coming over next year because the high school in Victoria has been producing some more kids and these guys will be around. Everybody’s going to come back. This spring the team said, ‘we’ve got three to four more years to play together, let’s give it the best three of four more years we got.’ So what you see is what you get.”