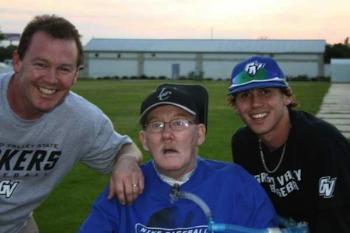 Although this may be dated news, it’s still appropriate to receive recognition here.

Tom Gwaltney, a 2009 inductee of the Minnesota Amateur Baseball Hall of Fame, passed away on July 5, 2012 at the age of 70 after a three-year battle with ALS (Lou Gehrig’s disease). Gwaltney was the founder of the Lake City Serpents and served as their manager for over 20 years.

Tom dedicated more than thirty years to Lake City baseball. He coached VFW, Legion and town team baseball during that time. Tom organized the amateur team, Lake City Serpants, in 1989 and continued to manage until his death. He took on the duties of the field manager of the Serpants, which meant that he acted as the grounds crew, equipment manager and transportation provider.  Tom also compiled all the stats and wrote the columns for the local paper.  He used his personal resources to keep the team afloat through the years.  He is responsible for keeping baseball alive in Lake City.

Tom’s son, Scott, now manages the Serpents and is vice president of the Classic Cannon Valley League. Lake City went 10-9 overall this past season with a 6-5 record in the league.