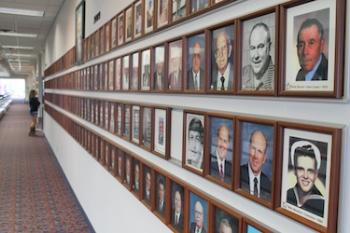 Denis Campbell grew up in Winsted with memories of summer Sunday mornings filled with his parents and family getting ready for baseball.  “Soup” was a three-sport athlete at Holy Trinity High School in Winsted playing baseball, basketball, and football.  He also played legion baseball and amateur baseball for Winsted. He managed the team for seven years.  Soup was president of the Crow River Valley North Division for more than twenty years and has been secretary-treasurer of the Winsted team for the past eighteen years. He helped in the building of a new concession stand and getting new lights for the baseball field.  He has helped with field maintenance and currently tends to the supplies and works in the concession stand for home games.  In addition he has organized fundraisers.  For many years he coached the local youth baseball programs in Winsted.  He has been an active volunteer with legion and city functions.

Don Giesen grew up in Union Hill; he started playing baseball as a kid in the back yard. He played baseball for New Prague High School from 1954-1956 and Legion baseball during those years.  He played amateur ball from 1956-1970 for Union Hill.  From 1964-1972 Don managed the Union Hill team.  In 1983 Don formed the Union Hill over 35 baseball team and played and managed the team until 2006 when he retired from playing and managing. Don has been instrumental in improvements and maintenance of the Union Hill Baseball Field. He assisted in the installation of the new fencing, building the dugouts, concession stand, and grandstand; he was very instrumental in installing lighting on the field.  To honor all his tireless dedication, the ballpark was named the Don Giesen Field at Union Hill Park. In his “spare time” time Don enjoys hunting, fishing, word working, making maple syrup, his apple trees, and singing in the St. John’s Church Choir.

Bob grew up in St. Cloud; he loved to play catch with his dad and later with his brothers Jim and Jack.  He played baseball at Cathedral High School and began playing amateur baseball in 1955 for Luxemburg and later for St. Cloud Park and St. Cloud Fitzharris a team he also managed.  For six years Bob coached Babe Ruth baseball. In 2002 Bob started and managed O’Hara’s amateur team.  For 25 years Bob served as the Director of Baseball for the City of St. Cloud summer recreation program. As a member of St. Cloud Sports Inc. he served on the Mayor’s baseball commission from 1995-1998; this commission helped to design Faber Field.  With his brother Jim, he also wrote a history of baseball in St. Cloud from 1867-1998. Bob has taught English and coached baseball at Cathedral High School from 1970-2012; the teams have won seven state high school championships. He assists in the care and development of the Hall of Fame Museum.

Herb Koch played baseball at Delano High School and at the age of sixteen began playing amateur baseball and at the age of nineteen began to manage the team.  Today he continues to manage the Loretto Larks.  He was also the North Star League secretary for fourteen years and is currently president of the league.  Herb has always been heavily involved in his local community; he served on the local athletic club board for over thirty years.  Under his supervision and hard work the improvements such as new lighting to the ball park also involved the building of a little league baseball field and three softball fields next to the ball park giving Loretto an athletic complex that is very unusual for a town of 650.  Herb helped to prepare the field and the concession stand. He helped build the Loretto Fire Station and was the Fire Chief for thirty years.  In 2009 Herb received the Mike Downs award for outstanding service to amateur baseball.

Jime Peck grew up in Deer River and played high school baseball for Deer River and college baseball at Itasca Junior College.  From the ages of 14-20 Jime played town team baseball.  Jime has spent his entire volunteer life coaching American Legion teams – he has also worked with Babe Ruth, Mickey Mantle, college baseball, and USA baseball in the Tournament of the Stars. He is currently in his 48th season of Legion baseball, Excelsior Post 259 has retired his number, 39, to honor him.  He is the first coach to win the “11 Who Care Award” from KARE 11.  He is the only youth coach inducted into the American Baseball Coaches Association Hall of Fame.  He helped to form the Dick Siebert Fall Baseball League for high school players and the Gopher Classic tournament. He was instrumental in raising funds for the Veteran’s Field in Minnetonka and presently is involved the funding for the new University of Minnesota baseball field.

Red grew up on a farm near Thorpe Wisconsin.  He played baseball for Thorpe High School and Legion baseball.  He signed a minor league contract and was assigned to the Superior Blues; during this time he wrote sports for the Duluth New Tribune and the Superior Evening Telegram. He later started writing sports full-time for the Eau Clair Leader.  In New Ulm Red has been involved in American Legion, VFW, high school, and amateur baseball. Red was instrumental in replacing the lights at the ballpark.  He served as the chairman of the 1958 state amateur baseball tournament in New Ulm. He also chaired the Midwest Central Plains Regional Legion Tournament.  For 24 years Red served as mayor of New Ulm. He was honored by the Jaycess and the Chamber of Commerce. He has chaired the Minnesota Sports Commission and received the WCCO Good Neighbor Award.  His research helps to preserve the history of sports in New Ulm.