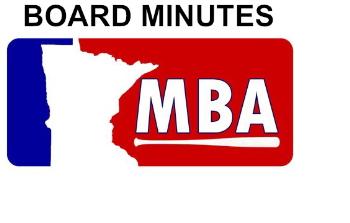 Here are the meeting minutes from the 89th Annual Meeting of the MBA held on October 20, 2012 in St. Cloud.

Meeting called to order by President Richter at 1:00 PM

Motion Brennan, seconded Rademacher, carried, to approve the minutes of the previous meeting with the following change: The date of the meeting should read 8/17/2012.

There were 16 dedicated baseball people in attendance.

The Board accepted the resignation of Brent Meyer as Region 6C Commissioner effective September 3, 2012.  The Board would like to thank Brent for all his dedicated service.

Tournament Chairpersons from both Maple Lake and Delano were present to give an update on the details of their respective fields and work that is to be completed this fall, as well as, projects for next spring in preparation for the 2013 State Tournament.

Jeff Janzen, representing the Delano/Maple Lake 2013 State Tournament Committees reported to the board that they will be using the Diamond D1 Pro baseball for next year’s state tournament.

Motion Hartmann, seconded Forsman, carried, to place an advertisement in the MSHSL Coaches Yearbook for $150.00

Wayne Erickson, representing the Cannon Valley Class C League was present and asked the board to consider allowing the Cannon Valley Class C League to have a 3 team league for the 2013 season.  He indicated that there was a possibility that Hampton will not have a team for next season.  The board recommended that the league work on trying to find another team to replace Hampton and at this time would not consider a three team league.  He was asked to come before the board at a future meeting to give an update on the progress of adding a new team.

Andy Auger, representing Sports, Inc. was present to assist with the Audit of the MBA Financial Report.  Andy, Mike Barry, Dennis Brennan and Tom Rademacher audited the MBA financials and approved the financial report for 2012.  It was deemed to be complete and accurate.

Dave Hartmann presented information regarding the Website. He discussed briefly that Steve Loos from DaVinci Software had submitted proposals for continuing their role as Website Hosting and 2013 Website Coordinator.  This information was tabled and will be discussed at either our November or January meeting.

The Region/Section Commissioners met at 3 pm and discussed items of interest and concern.  Their recommendations included the following:  Allowing each region to continue to determine how they want to structure their drafting procedures, keeping the same format of 48 team state tournament with the exception of not giving the top seeded team a bye the first weekend, try to schedule teams from the same region playing back-to-back, finish regions by Sunday night.

The meeting was recessed for dinner.

Meeting was called back to order by President Richter at 5:25 pm

Roll call showed all directors present with the exception of Joe Kreger.

Board members reported details on assigned committees and responsibilities.

Nominating Committee:  Reported the following nominees for election to the board of directors:  Bob Zellmann, Fred Roufs, Dennis Brennan, Tom Lemke and Andy Johnson.  Chairman Hartmann called for nominations from the floor.  After the required number of times, motion Jim Zellmann, seconded Dan Plein, carried, to close nominations.  There was a lengthy question and answer session that allowed individuals from the floor to pose questions to all candidates to inquire on their views pertaining to issues regarding reclassification, Class B and Class C tournaments, how each one would make the tournament better, etc.  After approximately one hour, ballots were handed out.  There were 46 ballots cast – Roufs 38, Zellmann 32, Brennan 27, Lemke 17 and Johnson 10.  Zellmann, Roufs and Brennan will serve three-year terms on the Minnesota Baseball Board.

Director Rademacher reported on player passes for this year’s tournament compared to the previous two years.  He indicated that 181 player passes were issued the 1st weekend.

Director Hartmann then expressed his discontent and views on things that he believed have been misrepresented on website and blogs.  He indicated that he felt compelled to respond to what he considered inaccurate information regarding closed or “secret meetings”, also, that the board does not care about Class B, and electronic communications to name a few.  He felt that individuals should not put their personal agendas ahead of what is best for baseball in Minnesota.  He also stated that he felt that the objectivity of our board is critical in overall decision making on behalf of the all MBA teams. He indicated that effectively immediately the board would be using emails for sending out minutes to league officers, commissioners, board members, etc.  Also forms will be set up in the future to be completed on line on the MBA website ie; releases, rosters, etc.

The floor was then open for discussion.  Things discussed:  2012 handbook has not been posted to Website, dress code for players during state tournament, college slide rule at home plate, college eligibility rule, having Class B Super Sectional not playing during the same time as the first weekend of the Class C State Tournament, reclassifications for  next year, Class C tournament format and setting criteria.

Being no further business, motion Brennan, seconded Rademacher, carried, to adjourn at 8:00 pm