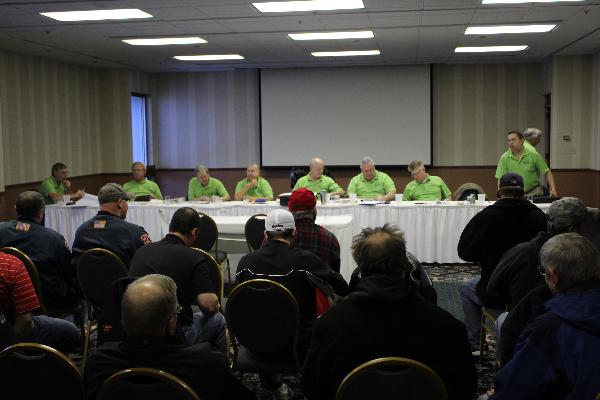 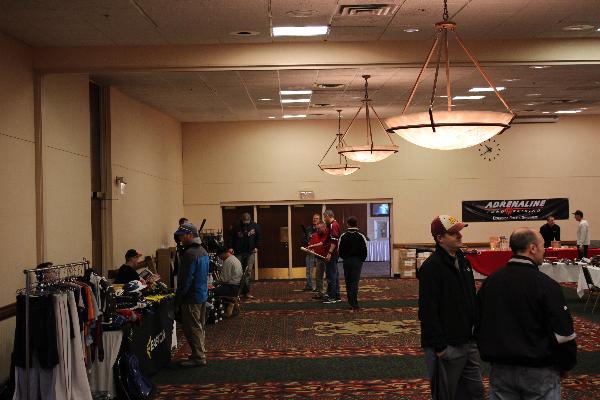 Meeting called to order by President Richter at 11:00 AM

Motion Brennan, seconded Rademacher, carried, to approve the minutes of the previous meeting.

There were 48 dedicated baseball people in attendance.

Tournament Chairpersons Steve Eilen and Jeff Janzen, Delano were present to give an update for the 2013 State Tournament. They informed the Board that they will be staying at the Super 8 Motel in Buffalo during the 2013 State Tournament. They also indicated an interest in having a booth at the 2013 TWINSFEST at the Metrodome January 25-27th.  Motion Forsman, seconded Barry, carried to approve the MBA paying the $200 fee for the booth.

Steve Kass from the Dawson Drakes along with Anthony Berreau were present to discuss Anthony’s eligibility to play for Dawson this season.  The board indicated that they should go to the Land O’Ducks League to request a mileage extension within their league.  They will return for the February meeting with their proposal.

Fox Lake submitted a request to move their home field from Welcome to Truman for the 2013 season.  Motion Roufs, seconded Zellmann to allow Fox Lake/Welcome to move to Truman with current roster grandfathered subject to league approval.  The vote was approved by an 8-1 with Hartmann voting no citing that he felt they should get league approval prior to Board approval.

Steve Gabrielson representing the Sartell Stone Ponies requested reinstatement for the 2013 season.  Motion Zellmann, seconded Forsman, carried.  It was noted that the player suspended last year would need to come before the board for reinstatement prior to the 2013 season and that the team was on probation for one year.

Todd Bergstrom representing the New Market Muskies requested reinstatement for the 2013 season.  Motion Forsman, seconded Roufs, carried to approve New Market as eligible for play in 2013.  They would be on probation for one year.

Bryce Rippentrop from the New Market Muskies was present to request reinstatement for the 2013 season.  Motion Kreger, seconded Rademacher, carried, to approve Bryce to play in 2013 provided he meets all eligibility requirements and noted that he would be on probation for one year.

Pat Schneider representing St. Joseph was present to discuss the board’s proposal to reclassify them to Class B.  He submitted a detailed rebuttal and requested to remain Class C.  It was at that time that the board discussed reclassification for movement of Class C teams to Class B for the 2013 season.  It was determined that the board would not move St. Joseph, Owatonna, or the Sartell Muskies at this time.  The Mankato Mets have moved to Class B for 2013.  Pat also indicated that the Lakewood National League was having a meeting to reform the Sauk Valley League for their C teams which would leave the Lakewood American League with 4 Class B teams.  He stated that they would be finalizing the details within the next couple of weeks.

Ada and Roseau were not able to be present to discuss each of their respective issues.  Motion Roufs, seconded Forsman, carried, to note that neither the Norman Polk League nor the Northwest Border League will be not eligible for post season play for 2013 until their league representatives appear before the board.  It was also requested that mandatory attendance is expected at the MBA February Board meeting.

Dan Plein, Red Wing, was present on behalf of the Class B teams and discussed the details of the Class B meeting earlier that day and the following was determined:

Super Sections – Requested that the Sunday seeding games not be required to be played. and that they would schedule 2 games on Friday night and 3 games on Saturday.

Super Section Sites for 2013 will be Austin, Marshall, Moorhead and Victoria.  Each Super Section will be handling the scheduling of umpires for each respective Super Section.

State Board Seeding – Board would continue to seed the Super Sections and State Tournaments.

Sections – Sectional play will be played out completely and they would like to have current leagues and geography be the main components.

Radius was discussed with the possibility of expansion.  A committee was established to review radius issues and to present recommendations at a future meeting.

The State Tournament Format for 2013 was discussed at length and it was determined that the board would maintain the same format for Class C.  This would be a 48-team tournament with the same regional format as was in 2012.  The Class B format will be an 8-team double elimination tournament.  Motion Forsman, seconded Rademacher, carried to maintain same formats as used in 2012 for 2013.

The MBA handbook was reviewed with final changes being made for 2013.  Motion Kreger, seconded Barry, carried. The following changes are listed below:

Minutes:  The minutes of all meetings shall be published and sent to all member leagues as soon as possible following the meeting.

Players that go to a wooden bat, college, or summer league will also be allowed to play with their MBA team.  The player must play in 4 league games in order to qualify for post season play.

Players that sign a contract with a professional team that has no affiliation with a major league team will be give the same consideration that we give players coming back from a Wood Bat League.  Player is also required to get a release.  Player will be eligible to return to his MBA team after the June 30th deadline.  All games played before and after June 30th will count towards his (4) game eligibility.

A percentage of receipts, after sales tax deduction, recommended to be 15% may be allotted to the teams entering the state tournament to help defray expenses.

All leagues must finish their league play in ample time for league and regional-sectional playoffs.  Such regional-sectional champions must be determined no later than Sunday 8:00 pm preceding the start of their state tournament play, the game or games to determine the champion must be played in all regions.  Draftee information must be selected and submitted within 1 hour of the final game.

A minimum of twenty-five (25) percent up to a maximum of fifty (50) percent of the gross receipts of the state tournament, after prevailing tax deductions, shall be placed in the treasury of the MBA.

Steve Loos representing The DaVinci Group presented their website proposal for continuing to maintain the coordination of the MBA website.  Motion Forsman, seconded Barry, carried to sign a two year contract to retain The Davinci Group as Website Coordinator for 2013 and 2014.

It is duly noted Kelly McMonagle, Fargo, is the new Section 6B Commissioner.

It is duly noted that Dave Hinkemeyer, Cold Spring, is the new Section 7B Commissioner

It is duly noted that Tony Beneke, Hamburg, is the interim Region 6C Commissioner

Bid proposals for the 2016, 2017, 2018 State Tournaments were submitted by Hamburg/Norwood/Green Isle, Dassel/Hutchinson Shakopee/New Prague, and Chaska/Chanhassen.  All formal proposals with details will be required to be submitted to the board by the April, 2013 meeting.  The selection of sites for the 2016, 2017, and 2018 tournaments will be announced at the June, 2013 meeting.

Bill Porter representing Albertville submitted a letter to request a reclassification back to Class C.  After some discussion it was determined that Albertville would remain Class B for the 2013 season.

It was noted that Hampton of the CCVL C League will not have a team for the 2013 season.  Wayne Erickson noted that they are continuing to look for another team for this year and that it is a possibility that Hampton could return as early as next season.  They understand under the 3 team league format that they would only send one team for regional play.

The Belle Plaine Tigers submitted their application to host the “TigerTown Classic” again this year.  The dates are June 7-9.

The Elko Express and the New Market Muskies submitted their application to host their tournament.  The dates are June 7-9.

Class B Sections were finalized for the 2013 season.  Motion Roufs, seconded Rademacher, carried.  They are as follows:

Reminder to all League Officers and Commissioners:  If you have not already done so  - PLEASE SEND YOUR EMAIL ADDRESS AND PHONE NUMBERS TO DAVE HARTMANN AT THE FOLLOWING EMAIL ADDRESS:  dlhartm@frontiernet.net

Being no further business to come before the board, motion Kreger, seconded Brennan, carried, to adjourn at 3:40 pm