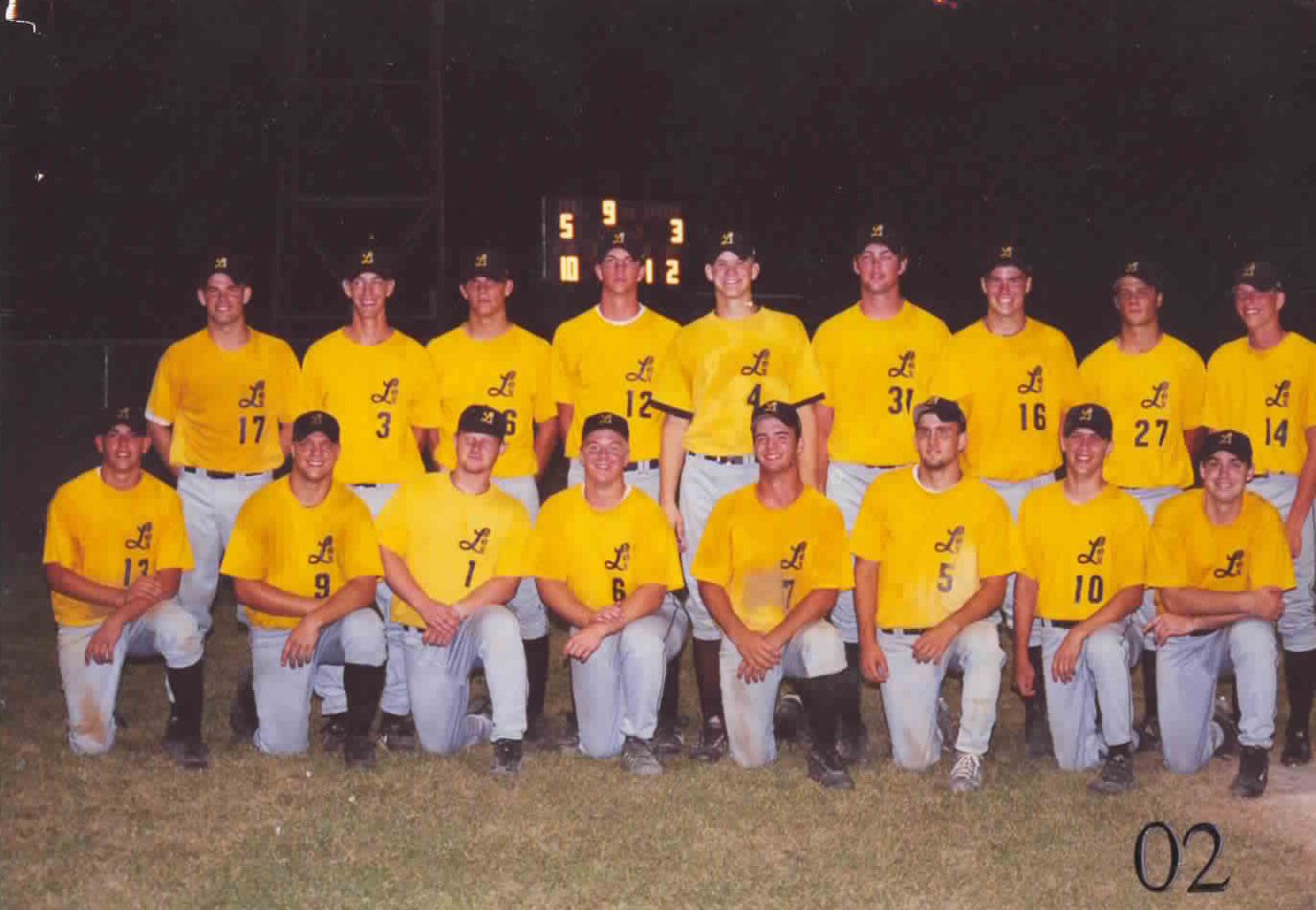 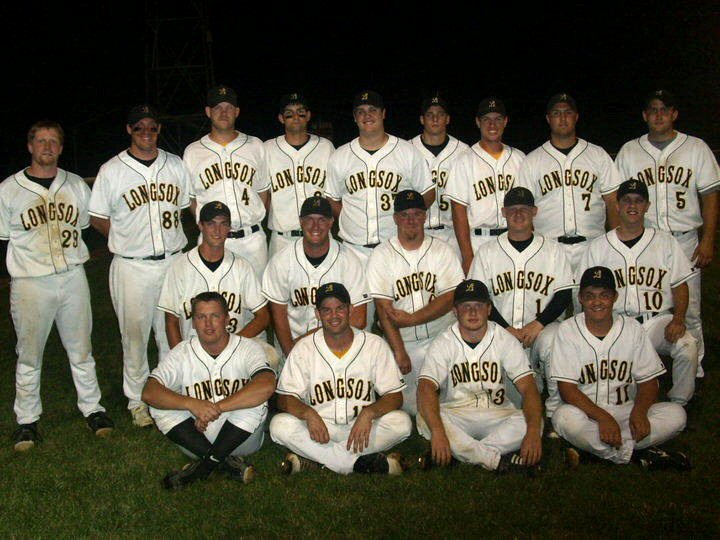 What do you do when a group of young men approach you and want to continue to play baseball but your town doesn't have an amateur team?  You start one.  That's what happened in Lamberton in 2001.  After meeting with coaches Derrick Jenniges and Casey Pack the  Lamberton Long Sox were born.   In 2002 the Lamberton Long Sox joined the Tomahawk League and this summer they will celebrate their tenth year.

With a core of six players Jacob, Isaac and Derrick Jenniges, Mike Samyn, Colby Pack, Mike Knakmuhs and Matt Samyn and Tyler Reiner, two other longtimers, the Long Sox have been a force in the Tomahawk League.  They have  won eight straight league titles,  advancing to the State Tournament in 2005, 2008 and 2009.  In 2005 and 2008 they lost first round games at State, however, in 2009 they finished in the final eight, being eliminated in a 14 inning thriller to St. Martin.

Derrik Jenniges, the manager, says that the core six have carried a big share of the work load that comes with every town team.  "They have donated hours of labor to improve the field over the past nine years.  The field we play on is school property, so we work in conjunction with the high school on improvement projects and funding," said Derrick Jenniges.  "It has been a good combination."

Over the years, the Long Sox and school district have added a concession stand, mower shed, new backstop, cement bleachers and a new mound.  They do all of this with fundraising from within the organization without asking for donations from the area business people.  They do get some financial support from the RRC School District.

One look at their team website www.lambertonlongsox.com and you get an idea of how close this team is.  It has the usual team picture, roster, schedule etc., but it also has congratulations of all kinds, Wedding anniversaries, marriages, birthdays and baby births.

"The best thing about being a part of this group is that everyone truly loves the game, but more important enjoy each other's company and have become great friends," said Derrick.  "Our organization has truly become a family oriented group.  We have come to learn that winning and losing is only a portion of the amateur baseball experience.  Belonging to something that gives you the chance to spend time with your friends, something that is now giving some of us the chance to watch our kids grow up together, that means alot more than any league championship.  We have truly come to care about one another and it is special anytime a group of people can come together to accomplish something that influences people's lives in a positive way," he continued.

The Long Sox have a number of other volunteers that Jenniges wanted to note:  Bryce Pack is their treasurer, scoreboard operator and leader in field improvement projects.  Dave Blank is the game announcer, Leonard and Vicky Jenniges are involved in the concessions, fundraising, and field impovement projects and Andy Dallmann is the book keeper.  PJ Bock takes tickets at every home game and Ron Kottke had a large hand in getting the organization started alond with Derrick's brother Jacob.

The Long Sox have also started a program to ensure their continued longevity.  In the last four summers the Long Sox have sponsored youth baseball teams.  They field four different teams that are age 10 and up.  Last summer over 50 young athletes participated from seven different communities.  Those youngsters know they have a place to continue to play the sport they love.

P - Has always been our strong point, but because of some injuries and a couple players becoming only weekenders we are anticipating a shortage this summer.  We have a pair of youngsters that will carry a heavy load throughout the regular season.  RHP Johnny Pistulka (Ridgewater) and LHP Shane Schoborg (MN West Worthington).  Tyler Reiner came on strong at the end of last summer and will be used in more of a starting role this season.  LHP Jake Wahl has a dynamic change up, but could be limited in innings as he completes schoolwork in Alexandria this summer.  Colby Pack, Jacob Jenniges, and Derrick Jenniges have all been solid inning eaters on past teams, but the jury is out as to how many innings they will throw.

C - Derrick Jenniges will move from a steady dose of innings the past two seasons back to more of a full time catcher as Reiner pitches more and Eric Altermatt pursues an internship up north.

1B - Landon Erickson.  A great addition two summers ago, plays almost every inning here and hits in the clean up spot.

3B - Colby Pack.  A consistent fielder with ample knowledge of the game and opponents.  Matt Knakmuhs became a solid replacement through the course of last season and may see extended action at 3B depending on the health of others.

SS - Mike Samyn.  Steady glove man, aggressive to the ball and becoming more disciplined at the plate.  He will be coming off a winter back injury.

LF  -  Matt Samyn.  Will hit in the 2-5 spots in the order and can really go get the ball in the outfield.

CF - Johnny P.  Great arm and speed to cover territory. (Donald Strand has been our CF / leadoff hitter for about 7 years and it sounds like he may be more available than last summer as he has completed his college course work and will be job hunting throughout the summer).  Strand really makes our offense go with his ability to hit the ball on the ground and run!

OF - Shane Schoborg.  Will fill in the outfield wherever needed.

Util - Jake Sell / Matt Knakmuhs ... both play 4-5 different positions on any given night.

What does Derrick expect for 2011?  “It is hard to tell until we actually get out there and see how guys feel after getting another year older.  We have always felt we played better at home, but then lost both region games at home last summer!  Seven of the ten guys in our lineup are there 90% of the time, so stability has been key.  If our veteran arms are healed up and our youngsters can carry the load to get it started the staff should once again be consistent,” said Jenniges.  “ In the end, we hope to be competing for a division title and a chance in the region playoffs.”  Lamberton opens the season with an exhibition game at Heron Lake.